Kelly Ripa‘s children have all grown up on the set of Live! and viewers of the show have literally watched them transform from babies to fully independent grownups.

Recently, Kelly and Mark Consuelos‘ only daughter Lola turned 21 and her milestone birthday was marked on the ABC daytime show.

During the segment, proud mom Kelly revealed that Lola was set to move abroad as part of her studies.

This will be the first time that Lola will have lived away from New York, having grown up there on the Upper East Side with her family, before moving to Bushwick to study.

Kelly told co-star Ryan Seacrest: “It is Lola Consuelos’ 21 birthday. We are waiting for her to get back – she’s in Europe right now. Yes, poor Lola.” 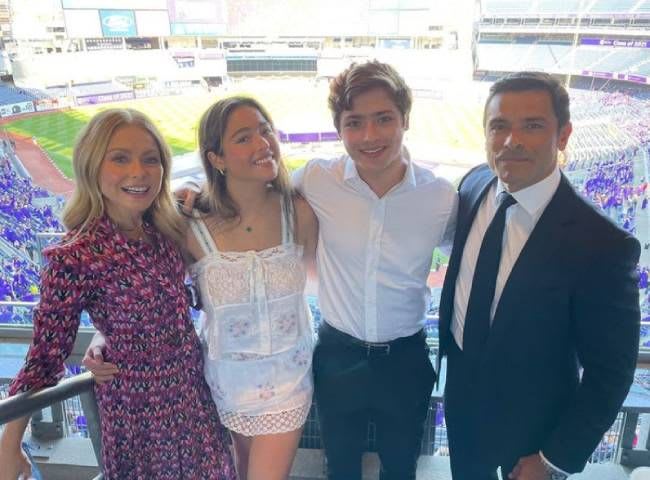 Kelly added that Lola’s move is slightly bittersweet for the 21-year-old, who will be financially independent now that she’s an adult.

The former All My Children star said that the vacation is a “last hurrah. After that, she’s off the family nipple, so to speak.”

Lola will join her brother Joaquin, who also chose to study away from New York City for his undergraduate course.

Joaquin was the first of the Consuelos siblings to fly the nest further afield, choosing Michigan as his place of study.

Kelly and Mark are now empty-nesters

Oldest son Michael, meanwhile, lives in Bushwick, having graduated from New York University last year.
He is an aspiring actor and has already appeared in Riverdale alongside his dad.

Kelly and Mark are keen to raise their children in the same way they were – being financially independent from them.

Kelly has also spoken out about the need for her children to earn their own way in life on Instagram.

One follower asked whether Michael had dropped out of school, to which she replied: “Michael goes to college and is a senior and works full time. He is in his first non parent subsidized apt with roommates.

“I’m used to getting a lot of slack because people love to have fake outrage over something they didn’t see. They only read a headline and wag their tired fingers.”She went on to say: “I didn’t grow up privileged and neither did @instasuelos. We work and we expect our kids to as well. And the fact that a pack of fools want to [expletive] about that, I say let em.”