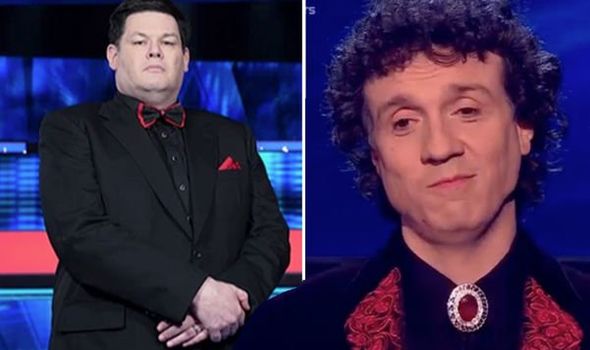 Beat The Chasers is back tonight with all six quizmasters back in their hot seats to face more money-hungry contestants. Ahead of the show being aired, Darragh Ennis, 41, told fans that his “stupidest moment” on the show will be aired in the latest episode.

In view of his 20,000 followers, Darragh tweeted: “The day has arrived. My stupidest moment ever will feature in #BeatTheChasers tonight at 8.30pm on @ITV and @WeAreSTV.

“Tune in to see my brain pop out for a tea break while my mouth jumped behind the wheel.”

His co-star Mark Labbett, 56, agreed that the answer in question wasn’t his best and mocked him on the post.

He commented: “Only a genius can say something REALLY stupid.”

The newest chaser of the bunch went on to urge fans to mock him over the answer.

One of his followers named George Ross wrote: “We’ve all had those moments.

The Irish-born quizzer said he wasn’t worried about it being shown as he found it “hilarious”.

Mary Nelson asked if the other chasers mocked him over the moment.

He replied: “Absolutely and rightly so.”

Beat The Chasers continues tonight at 8.30pm on ITV.