The News and Documentary Emmy Awards have a new two-night format this year, and CNN is the leader in the clubhouse with seven wins after Night 1. See the list of winners here. 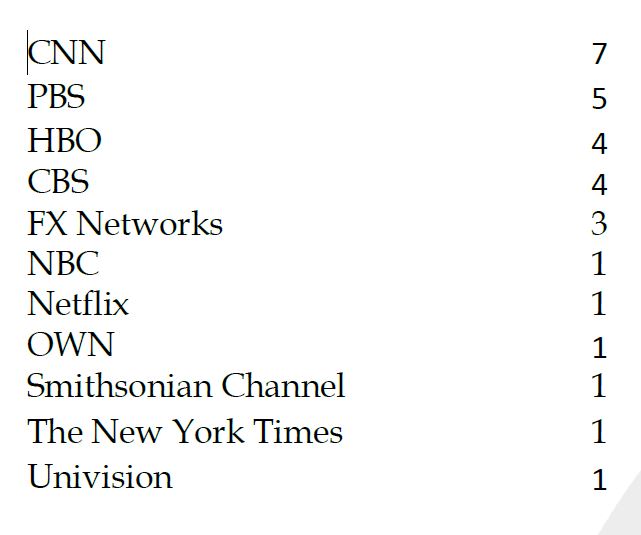 PBS is second overall with five trophies, followed by HBO and CBS with three each. Here is the list of Night 1 winners by network or platform:

CNN’s New Day took the marquee prize for Outstanding Coverage of a Breaking News Story in a Newscast for its “Roger Stone Raid” story, when the net’s camera captured the arrest of the future convicted felon. HBO’s Vice News Tonight, which was canceled by the premium cabler in June but was revived on Vice TV, won Outstanding Coverage of a News Story in a Newscast for “Collapse of the Caliphate,” about the fall of ISIS.

Outstanding Feature Story in a Newscast went to CBS Sunday Morning for its piece called “What Price?” with correspondent Ted Koppel. And NBC’s Today won the Hard News Feature Story award for its piece “Zone Rouge, an army of children toiling in African mines.

“Tonight, we proudly honored the outstanding professionals that make up the Television News Programming categories of the 41st Annual News & Documentary Emmy® Awards,” said Adam Sharp, President & CEO of the National Academy of Television Arts & Sciences.. “As we continue to rise to the challenge of presenting a ‘live’ ceremony during Covid-19 with hosts, presenters and receipients all coming from their homes via the ‘virtual technology’ of the day, we continue to honor those that provide us with the necessary tools and information.”

Night 2 of the 41st annual News and Doc Emmys is set for Tuesday, when the documentary prizes will be awarded.