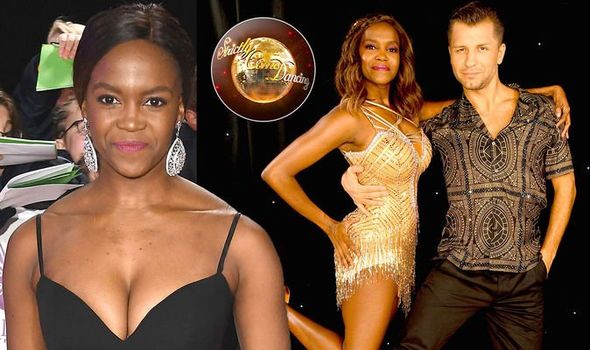 Oti Mabuse has recalled how she was left in tears due to insecurities about her 28GG bust line, something that has bothered her since she was a teenager. The Strictly Come Dancing professional praised the BBC team for how they reacted to her outburst, which saw her compare herself to the other dancers. The 28-year-old first joined the dance competition in 2015, where she was partnered with Olympic boxer Anthony Ogogo. Her comments on her chest come ahead of her candid interview on ITV’s Lorraine tomorrow, as part of the new Body Confidential series.

I was like, this looks so bad and I look so massive compared to the other girls

On her upset at Strictly, Oti started: “I remember fitting my first bra and I was crying. I was like, this looks so bad and I look so massive compared to the other girls.

“Nobody picked on me for it and no one discriminated against me for it and nobody said anything in a negative way and I think that helped me and my self esteem and my nerves about being out in a bra with sequins on.”

She went on to discuss how her mother had taught her how to deal with her bust, after she’d also found herself in a similar situation.

The small screen favourite continued: “All my family has always had big boobs. I was hitting puberty way before other girls were.

“As a 12-year-old girl going in and saying, ‘I’m looking for a B cup’, that kind of sounds unrealistic.”

Oti then said: “I’m lucky that my mum has the same issue and she was able to teach me how to deal with it. As a young girl I was always wearing jersies over it.”

Speaking to other women with similar body shapes, she revealed having a good fitting bra makes all the difference, especially given her active career and due to the fact she often suffers shoulder, neck and back pain.”

She added: “Most shops cater for everyday women but in my case I don’t have an everyday body.

“We all come in different shapes and sizes and I think it’s really important we all embrace and celebrate the skin that we’re in. It is you after all and I think that’s really special.”

Oti rose to fame on the German version of Strictly, Let’s Dance, where she appeared for two seasons.

The BBC offering also came about in the same year four years ago, and Children In Need and Christmas specials followed.

After getting kicked out in 14th place with Anthony, 30, Oti was much more of a regular face in more recent years.

She made it to the final with Danny Mac, while Jonnie Peacock and Graeme Swann saw them placed eighth and seventh respectively.

Meanwhile, Oti landed a role opposite Cheryl and Matthew Morrison earlier this year in The Greatest Dancer.

She went on to triumph with act Ellie, while KLA also made it into the final.

Watch Oti Mabuse on Lorraine tomorrow on ITV from 8.30am.