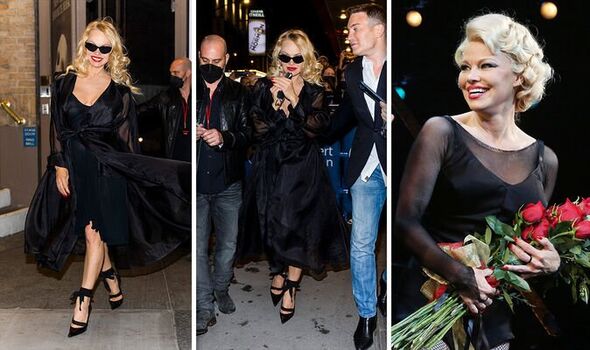 Pamela Anderson, 54, wows in plunging black gown as she returns for night three on Broadway

Pamela Anderson is starring in the smash hit revival of the musical Chicago on Broadway. The star, 54, looked stunning as she stepped out in a plunging black down for the third night of her performance on the big stage.

Pamela showed off her ageless beauty as she made her way down the streets of New York’s trendy theatre district.

The star wore a shiny black gown that fanned out as she walked along the pavement.

The dress featured a low neckline and a tie at the waist to show off the actress’ figure.

The sleeves of the dress were made of a dark semi-sheer material, while her skirt parted a little at the front to show off her toned legs.

The star sported a pair of dark shades over her eyes. She had painted her lips and nails bright red for the occasion.

She wore her blonde hair in elegant curls that stood out against the black fabric.

Pamela finished off the look with a pair of pointed, black stiletto heels with black ties around each ankle.

The star was snapped en route to the Ambassador Theatre, where she had made her debut in the lead role of Roxie Hart two days earlier.

Pamela Anderson, 54, looked stunning in her black frock ahead of her third performance.

Pamela Anderson, 54, kept it low-key behind a pair of sunglasses as she made her way towards the theatre.

Pamela Anderson, 54, made her debut as Roxie Hart this week

Pamela Anderson, 54, has been enjoying the spotlight as Roxie Hart in the musical Chicago.

Pamela Anderson, 54, was given a bouquet of flowers for her fabulous performance.