Princess Charlotte has proved popular with royal fans over the last few days, having shared a sweet good luck message for the England women’s football team and then joining her parents at the 2022 Commonwealth Games.

However, in a brief moment during her time in her stands with the Duke and Duchess of Cambridge, the young royal looked distinctly unimpressed as her dad smiled for a selfie with some fellow spectators.

Charlotte could be seen standing to the side and shooting a doubtful glance to William as he beamed for the group photo.

WATCH: Princess Charlotte looks so shy as she shakes hands with royal well-wisher in unseen clip

The Princess joined her parents in Birmingham on Tuesday, where they took in the swimming at the Sandwell Aquatics Centre.

Wearing an adorable striped summer dress with a Peter Pan collar teamed with white strappy sandals, the seven-year-old appeared captivated by the events, and at one point, gave her dad a thumbs-up. 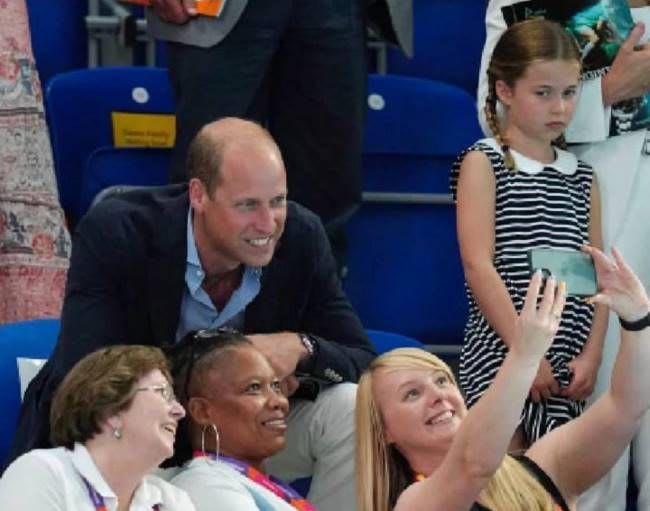 Charlotte looked unimpressed as her dad posed for a photo

The Cambridges sat just in front of the Earl of Wessex, who is Vice-Patron of the Commonwealth Games Federation, and his wife Sophie, who also brought their teenage daughter Lady Louise Windsor and son James, Viscount Severn to the event.

On Sunday, Princess Charlotte’s video with William – in which the duo wished the Lionesses well ahead of their 2-1 victory over Germany – divided fans.

While some believed the youngster resembles her grandmother, the late Diana, Princess of Wales, others expressed that she favours her great-grandmother The Queen. 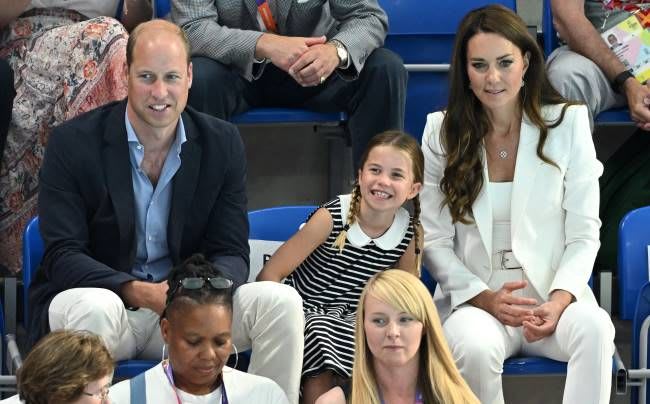 The Princess appeared to enjoy her day out

Regardless of their opinion, though, they were in agreement that it was lovely to see Charlotte and that she and William clearly share a sweet bond.

In their video, the Duke said: “We both want to wish the Lionesses the best of luck for tonight. You’ve done amazingly well in the competition and we are rooting for you all the way.”

The little Princess, who was cuddled up to her father, added: “Good luck, I hope you win. Bye.”

Make sure you never miss a ROYAL story! Sign up to our newsletter to get all of our celebrity and royal news delivered directly to your inbox.