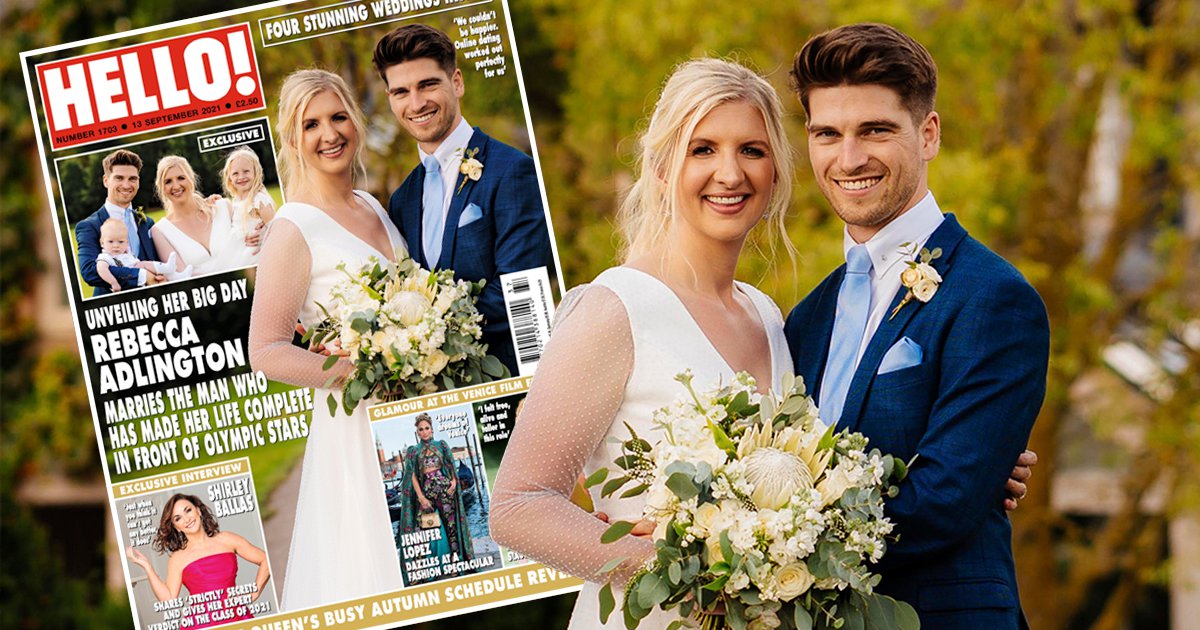 Rebecca, 32, had not publicly confirmed her engagement to Andy, 30, but surprised fans by announcing that they had tied the knot at the lavish manor Scarlet Hall on August 28.

The couple planned their wedding in just four months, after they came across the venue while looking for holiday destinations.

The estate in Chester costs £10,995 to hire for a weekend wedding.

The newlyweds shared their big day with Hello! magazine, with Rebecca looking stunning in a white gown with sheer sleeves made bespoke for her by Turkish designer Zeynep Kartal.

Her new husband looked dapper in a dark blue suit, teamed with a white shirt and light blue tie.

Speaking about their wedding day, retired swimmer Rebecca said: ‘The sun shone, the people we love were there and it was just the best day.’

Rebecca was walked down the aisle by her father Steve and her six-year-old daughter Summer, who served as both flower girl and ring-bearer.

Rebecca chose to surprise facilities manager Andy by choosing Tom Odell’s Grow Old With Me to soundtrack her walk down the aisle, leaving the groom in tears.

She said: ‘We chose all the other music together, but I wanted one little thing that was a surprise for him. He kept trying to get it out of me, but I wouldn’t break.’

Andy said: ‘The second it kicked in, I thought, ”Oh, you’ve really pushed me to the limit with this” and I felt my composure start to go.

‘So when Becky started walking towards me with her dad, I just lost it. She had the most beautiful smile on her face. She looked incredible.’

Rebecca and Andy have been together for three years, having met on the dating app Bumble in early 2018.

They welcomed their first child together, Albie Bennett Parsons, in March this year.

This is Rebecca’s second marriage; the I’m A Celebrity… Get Me Out Of Here! star split from Harry, 29, after 18 months of marriage in 2016.

However, the exes remain friends and are co-parenting Summer together.