Robert Irwin gave his 2.7 million fans the heebie-jeebies after an Instagram share. In the first photo of the multi-slide post, Steve Irwin’s son was swimming alongside a massive manta ray. The stunning shot showed just how small Robert was compared to the giant filter feeder. According to Barrier Reef, manta rays can boast a wingspan of up to seven meters and weigh up to two tonnes.

Robert shared, via his caption, that he was celebrating Discovery’s “Shark Week” and that he would be visiting the Great Barrier Reef on the first episode of the “Crikey! It’s Shark Week!” series for the channel. He said that he would go “face to face with great white sharks at the Neptune Islands” and even go “night diving with sharks on the hunt.” Just like his father, Robert seems to have a penchant for wild adventures. The 17-year-old concluded the caption by saying that he would be “getting one-on-one with massive manta rays.”

Sounds like quite a feat, considering that his father’s life was ended by a ray, albeit a stingray, in 2006. Steve was stabbed “hundreds of times,” per The Washington Post, by the usually docile creature. However, Robert was quite comfortable swimming with a creature related to the dreaded stingray. Here’s why Robert enjoyed his swim and why his fans were freaking out. 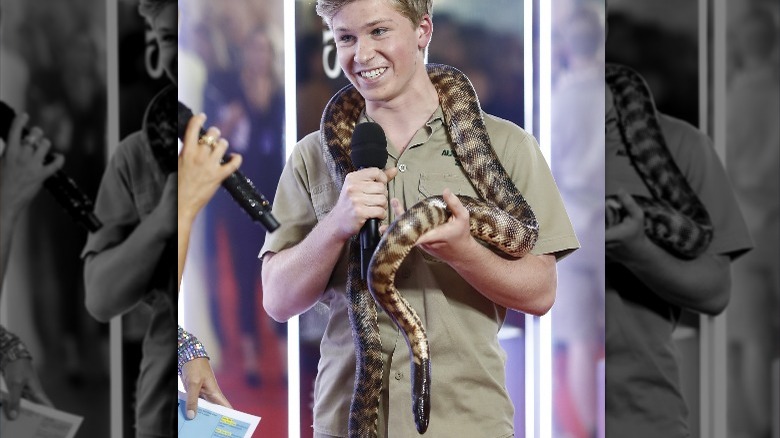 Robert Irwin appeared to be unfazed as he swam with a manta ray. Perhaps it’s because these giant sea creatures pose no threat to human beings, per Barrier Reef. Unlike stingrays, manta rays don’t have barbs and protect themselves with their sheer size and speed, per Cape Clasp. So, Robert was in no danger as he swam alongside the massive creature. However, many of Robert’s fans weighed in on his Instagram post because it reminded them of how his dad Steve Irwin died. They were perturbed by the pic and shared their feelings in the comments section.

“I did not realise I had ptsd until this moment. Please be careful,” one fan asked the 17-year-old. Another chimed in by saying, “Please please and I know everyone has told you … and I know u r very trained … please please be careful. We don’t want to lose you … a very gifted and talented young man.” “Love your work, but this pic made me shiver … no doubt your Dad is with you,” a third person said.

However, some users pointed out that there was a difference between manta and stingrays. As one person noted, “That manta ray looks absolutely gorgeous! And for everyone in the comments manta rays don’t have barbs.” And that’s the reason we need people like Robert Irwin to educate us about our wildlife!