Sarah Huckabee Sanders has been in the spotlight for quite some time, but her most memorable role in recent memory was as press secretary for former President Donald Trump. Sanders served as the press secretary for three years during Trump’s presidency, per Time, after Sean Spicer resigned from the position. In April 2019, Trump announced that Sanders would be stepping down from her post in a tweet that has since disappeared after Twitter deactivated his account. “Our wonderful Sarah Huckabee Sanders will be leaving the White House at the end of the month and going home to the Great State of Arkansas,” he wrote.

According to Fox 5, Sanders was emotional during her resignation. “I couldn’t be prouder to have had the opportunity to serve my country and particularly to work for this president,” she told the press. “I loved every minute. Even the hard minutes.” Sanders shared that she would be going back home to spend more time with her three children, who she called “the most outspoken and loyal supporters” of Donald Trump.

Then, in January 2021, Sanders shared a video to announce a run for governor of Arkansas. “I’ve been tested under fire, successfully managing one crisis after another, in one of the most difficult, high-pressure jobs in all of government,” she said in a video. “At the table with President Trump, confronting our most dangerous adversaries like China and North Korea.” So why is everyone buzzing about her most recent statement? Keep scrolling for the deets. 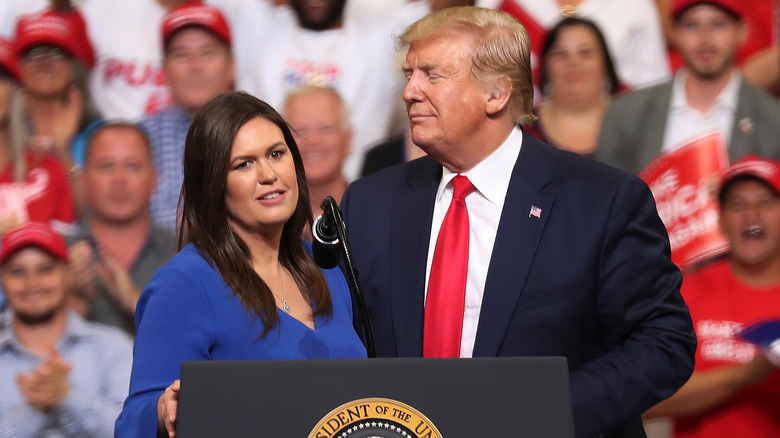 Sarah Huckabee Sanders is turning heads with her latest statement. The Arkansas gubernatorial hopeful penned an Op-Ed for the Arkansas Democrat-Gazette, where she shared her thoughts on the coronavirus vaccine, which she dubbed the “Trump vaccine” rather than the COVID-19 vaccine. “Like many of you, I have had a lot of misinformation thrown at me by politicians and the media during the pandemic,” she wrote. “And, like many of you, I spent a lot of time sorting through it all, trying to make the best decision I could for myself and my family.”

Sanders went on to slam Dr. Anthony Fauci and “the ‘because science says so’ crowd of arrogant, condescending politicians and bureaucrats were wrong about more than their mandates and shutdowns that have inflicted incalculable harm on our people and economy.” She also called out The New York Times and CNN for claiming that Trump’s vaccine plan was “a dangerous political stunt.”

Sanders didn’t stop there, calling out President Joe Biden and Vice President Kamala Harris. “If President Biden, Vice President Harris, and others on the left truly care about increasing the vaccination rate and saving lives, they should admit they were wrong to cast doubt on Operation Warp Speed and give President Trump and his team the credit they are due for the development of a safe and effective vaccine in record time,” she added. She then encouraged the people of Arkansas to do their best research and consult with family and doctors before getting vaccinated.