SEBASTIAN SHAKESPEARE: What’s new pussycat? Sir Tom Jones is in talks with producers about a big-screen biopic of his life but tells them: ‘I’ll do all the singing!’

With Bohemian Rhapsody breaking box-office records and Rocketman making millions, it’s not unusual for film producers to be searching for the next rock star whose life story could light up the big screen.

And they seem to have found it in Sir Tom Jones. ‘They’re talking about doing a film about my life and they’re trying to find out who would play me,’ Sir Tom tells me at the GQ Men of the Year Awards, at Tate Modern.

Although flattered, he is concerned about the casting. ‘I hope they find a Welsh actor to play me and not a singer. They should leave the singing to me — that’s all I ask,’ adds the Welshman, who later presented the Icon of the Year Award to Kylie Minogue. 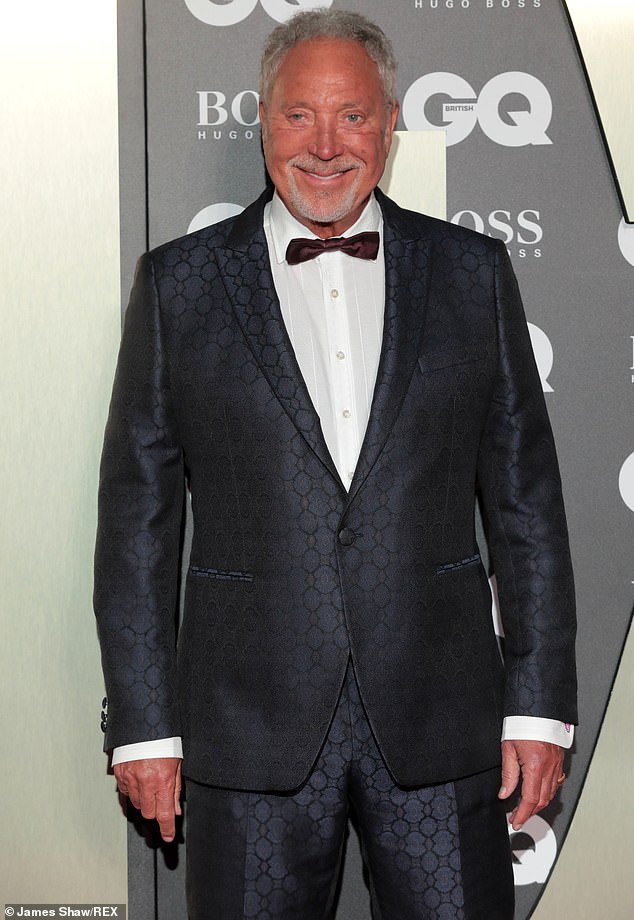 Sir Tom Jones is in talks with producers about a big-screen biopic of his life. Despite being flattered, he is concerned about the casting. (Pictured: Sir Tom Jones at GQ Men of the Year Awards on Tuesday at the Tate Modern, London) 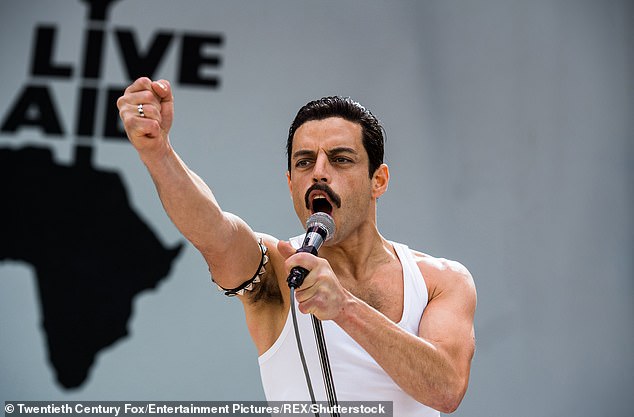 It follows on from the box-office breaking success of Bohemian Rhapsody. (Pictured: Rami Malek, playing Freddie Mercury, in the film) 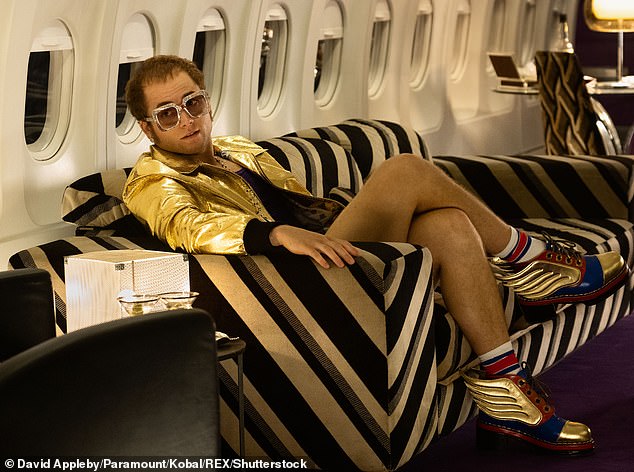 And the continuing success of film Rocketman about the life of Elton John. (Pictured: Taron Egerton as Elton John in the film)

The producers will have no shortage of colourful material. A coal miner’s son from Pontypridd, Sir Tom sang his way to global fame and became friends with Elvis along the way.

Although married to the same woman, Linda, for 59 years until her death in 2016, Sir Tom has said he enjoyed flings with up to 250 groupies a year at the height of his fame and his philandering once led Linda to assault him.

At the GQ jamboree, Sir Tom rubbed shoulders with another Welshman, Michael Sheen, who beamed as he made his red-carpet debut with pregnant girlfriend, Anna Lundberg, 25.

The actor, 50, hosted the star-studded ceremony. He would have narrowly avoided an awkward run-in with his ex-girlfriend Aisling Bea, who was also at the event. 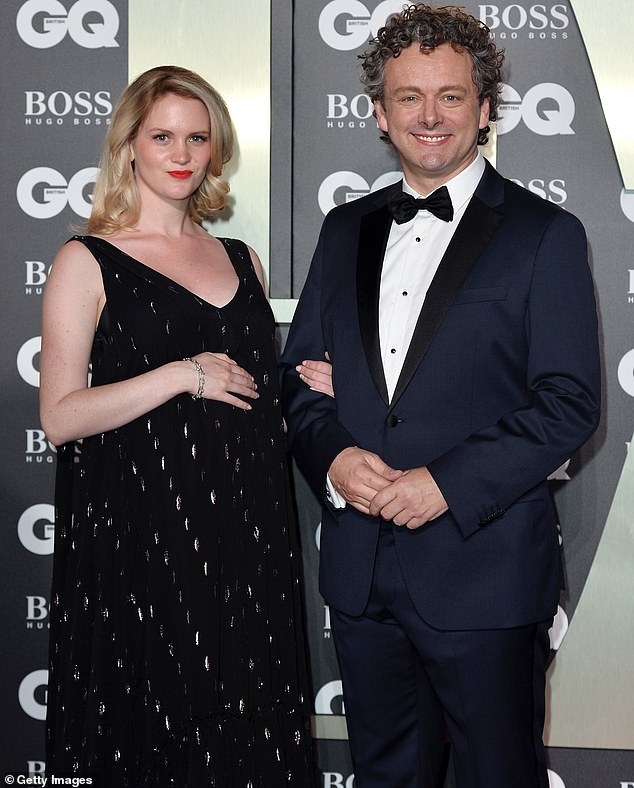 Actor Michael Sheen, 50, beamed as he made his red-carpet debut at the GQ jamboree with his pregnant girlfriend Anna Lundberg, 25. Sheen has been dating the Swedish model, five years older than his daughter, for a matter of months

Sheen has only been dating the Swedish model — who is just five years older than his daughter Lily — for a matter of months, following his short-lived relationship with actress Bea. ‘There are too many good things to name about becoming a dad at 50,’ Sheen tells me. ‘The sleepless nights ain’t one of them.’

Kylie Minogue was the first name on the guest list for the event as her boyfriend, Paul Solomons, works for the magazine.

‘Thank you to British GQ’s Icon of the Year and the woman I love,’ he said yesterday. ‘Without you these awards just would not have been the same.’

All might not be lost for David Gower, who is being dropped by Sky after the current Ashes series.

Yesterday he popped up as the sports news presenter on Radio 4’s Today programme.

So, could this lead to a permanent new role for the former England captain? A BBC source tells me he did a ‘fine job but it was a one-off’, while Gower, 62, tells me: ‘It was great to be a brief part of an iconic show. Who knows what might spring from it?’

Polymath Stephen Fry, who counts being author, comedian, TV presenter and actor among his skills, could have also been an MP.

A letter he wrote to Neil Kinnock has been published by the Churchill Archives Centre, Cambridge. In it, Fry lavishes praise on the then Labour leader and reveals his own political dream.

‘Jesus, Britain needs you at Downing Street,’ he gushed. ‘If I can be of any help on the trail, I’ll do what I can, natch.’ He added, optimistically: ‘Looking ahead to your second premiership, I am seriously considering the possibility that you may well have me behind you on the government benches in 1995/6 and giving your Whips headaches.’

Fry backed the wrong horse, as Kinnock blew the 1992 election.

And anyway — Labour has more than enough comedians on its benches.

One party MP Rory didn’t get kicked out of…

Among the most striking outfits at the GQ awards was that worn by Tory rebel Rory Stewart.

The Eton-educated former leadership contender sported a green waistcoat and matching trousers in the tartan of the Stewart clan.

As he accepted his Politician of the Year prize, he told guests he’d been stripped of the Conservative whip by Boris Johnson just moments before.

‘When I voted against the Government this evening, I heard that my whip has been removed,’ he told the audience. ‘Boris has decided he doesn’t want me in the party. It was a pretty astonishing moment.’

Spare a thought for actress Kate Beckinsale, who suffers for her art.

‘The first day I was wrapped up in a tarpaulin as a dead body, and then covered in liquid cement,’ she recalls.

‘I’ve got four brothers and I’m very capable of being in a boys’ club. It’s just that I’m claustrophobic.

Until recently, she enjoyed the splendour of Chequers — the fully staffed Chilterns mansion, which is at the prime minister’s disposal.

But I can disclose that, even though Theresa May stepped down two months ago, her transition back to the indignities of real life is being cushioned by the authorities at Heathrow.

‘As a former Prime Minister, and for security purposes, Theresa May was offered the use of the Windsor Suite [last month] while travelling via Heathrow,’ I’m told by her office.

The suite is a supremely discreet, bomb-proof, marble-floored retreat at Terminal 5, usually favoured by popes and presidents — as well as, of course, by serving Prime Ministers. Film stars and tycoons have to shell out royally for admission. May, as a guest of Heathrow Airport, records the perk as being worth £4,200 in the Register of Members’ Interests. Just the ticket.