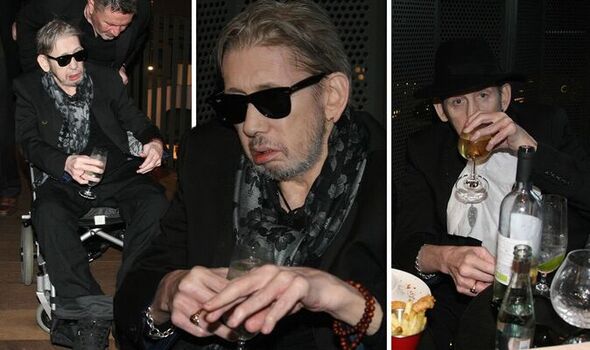 Shane MacGowan made a rare public appearance last night in Dublin as he celebrated the launch of his book, The Eternal Buzz and the Crock of Gold. The book features Shane’s illustrations, self-portraits, school essays and unpublished handwritten lyrics.

Shane MacGowan, 64, has been pictured enjoying a drink alongside his wife Victoria Mary Clarke and celebrity guests to celebrate his book launch in Dublin last night.

The Pogues frontman sat in a wheelchair for the event, with the singer being wheelchair-bound since fracturing his pelvis in 2015.

The singer cut a casual figure in black trousers and a t-shirt which he paired with a dark blazer and scarf.

Shane shields his face with large dark sunglasses and a wide brimmed black hat to complete his casual ensemble.

The musician celebrated the launch of his limited edition book with his wife, sister Siobhan, 59 and celebrities including Patrick Bergin, Louis Walsh, Peter Coonan and Diarmuid Gavin.

Shane MacGowan frontman sat in a wheelchair for the whole event, with the singer being wheelchair-bound since fracturing his pelvis in 2015. MacGowan continued performing after leaving The Pogues in 1991 and despite years of trouble with alcohol and drugs that saw him lose all his teeth, until he received new implants in 2015.

Shane MacGowan has been wheelchair-bound since 2015

The singer cut a casual figure in black trousers and t-shirt which he paired with a dark blazer and scarf. Shane MacGowan also tried to shield his face with large dark sunglasses and a wide brimmed black hat to complete his casual ensemble.

Shane MacGowan has suffered physically from years of binge drinking and would often perform on stage drunk. In an interview with The Spectator, MacGowan said he now sleeps in a “sumptuous” hospital bed and needs daily help from carers due to his mobility issues. However, despite his health setbacks he has found a passion for art and last month attended Andipa Gallery in South Kensington, his collection, The Eternal Buzz and the Crock of Gold.

During lockdown, Shane MacGowan’s wife, Victoria Mary Clarke, went through items she had been collecting for more than three decades from her husband’s career and said she felt as if she had “unearthed treasure” when she realised the amount of material she had retained. This was used in his new book, The Eternal Buzz and the Crock of Gold. The book represents six decades of Shane’s artwork and includes drawings of Bono, Grace Jones and Kirsty MacColl, as well as love notes and even MacGowan’s cocktail recipes.

Shane MacGowan first met his wife Victoria when she was just 16 years old and he was 24, but it would be another four years before they began dating. It was a long courtship for the couple who didn’t get engaged until 2007 and were not married for another 11 years.