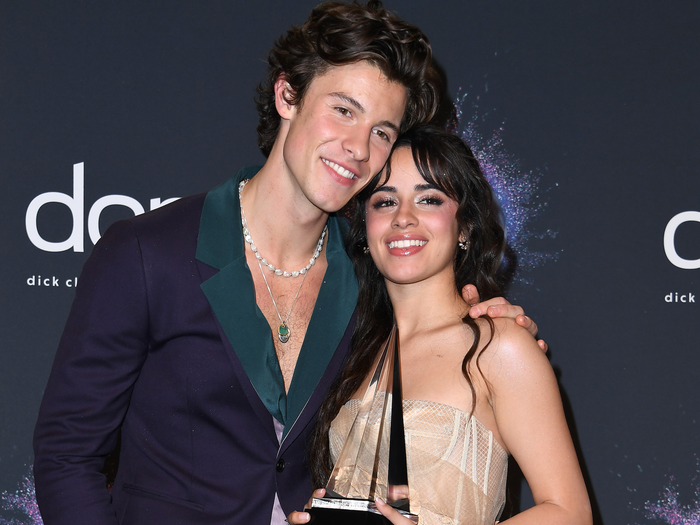 Shawn Mendes shared the story behind his and Camila Cabello's viral video from 2019, in which they showed fans how they "really kiss," and said they "might have had a little too much tequila" when they recorded it.

"We might have had a little too much tequila one night and just recorded ourselves making out as though we were monsters, to get a rise out of people," Mendes said during a recent interview for the podcast titled "Armchair Expert With Dax Shepard."

The 22-year-old singer went on to say that he and Cabello — who knew each other for five years before they began dating in 2019 — thought it would be funny to poke fun at themselves after people accused them of kissing "like fish."

"It just felt like everyone was talking about it and taking photos and there were paparazzi hiding in bushes and it was like, 'What if we just posted a photo of us licking each others' faces? Like, no one's ever even seen us kiss. We're just gonna go full-on gross,'" Mendes told Shepard.

The "Wonder" singer said he got a mixed reaction from his friends and his fans afterward.

"People were so offended by it and so excited by it, too," Mendes recalled. "It was like this really intense thing. I was getting messages from people being like, 'This is the funniest thing I've ever seen' and people being like, 'You should really take that down. I don't know, it's kind of offensive.'"

"It was ridiculous, but at the time, it was relevant," he added.

Mendes and Cabello's over-the-top video came up during his conversation with Shepard after the actor asked about a specific moment in Mendes' recently-released Netflix documentary titled "Shawn Mendes: In Wonder."

About 30 minutes into the film, Mendes was seen visiting his apartment for the first time in about three months. After putting his stuff down, he walked by his piano and quickly removed a framed image (which was backing the camera) and the moment was never addressed.

Speaking with Shepard, Mendes revealed that the photo he hid showed him and Cabello kissing during their viral moment, and was given to him by his grandma.

"My nan, in England, who's in her '60s, I don't even think she knew what the photo was from," the singer said. "She framed the photo from that video and put it in a little Happy New Year's thing and sent it to me and it was on top of the piano.

"My fear just took over and I was like, 'I gotta get this out of here," he said.