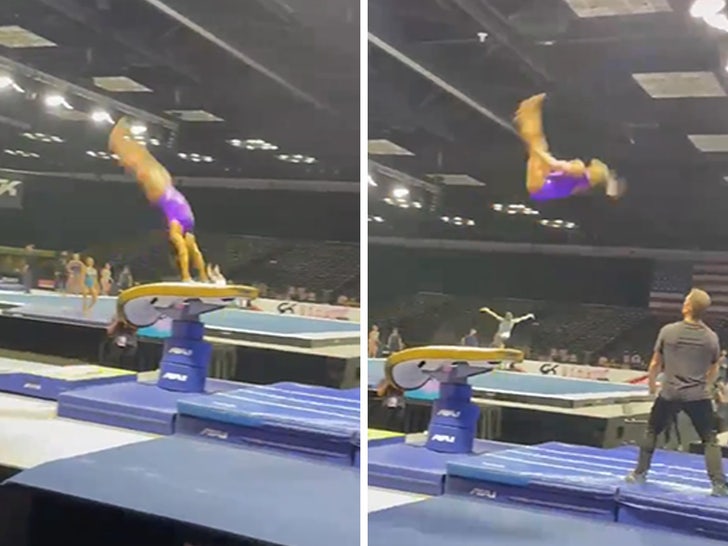 Simone Biles is not a human being!!!

The 24-year-old USA gymnastics superstar just nailed the damn near impossible Yurchenko double pike not once, but TWICE during a practice session for Saturday’s U.S. Classic.

… and now the big question — will she pull it off this weekend and become the first woman to ever land the move in an official competition!?!?!?

For those who don’t know, the Yurchenko double pike is both incredibly challenging and dangerous — and no female gymnast has ever completed the move during a competition.

The move — named after Soviet gymnast Natalia Yurchenko — is when a gymnast starts with a roundoff back-handspring approach to the vault, which leads to a double flip while the athlete maintains a straight-legged position.

But Biles had no issue tackling the move Friday during podium training ahead of the U.S. Classic this weekend … perfecting what she’s been teasing since February 2020.

In fact, Biles opened up about her plans to use the move back in March during a conversation with Texas Monthly … saying she was making real progress during training sessions and her confidence was growing.

“So far, we’ve been training it pretty consistently and there haven’t been too many times where I was like, ‘Oh, that was really scary. Maybe we shouldn’t do that.'” Biles said.

“It’s actually been like, ‘Wow, this is feasible, we can do this.’ And that’s kind of the scary part, me testing my limits, proving myself wrong, and being like, ‘Dang, Simone you can do this. That’s insane.’ Honestly, at this age, I feel like I would kind of start going down, but I’m still going up.”

Clearly, she wasn’t kidding … ’cause Biles made it look easy on Friday!!!

Team USA gymnastics legend Nastia Liukin was so impressed by the video, she tweeted, “YOU. ARE. INSANE.”

Now, we wait to see if Biles busts out the move on Saturday — her first time competing in 587 days!

ALL HAIL THE QUEEN!!!