The day is finally here: we actually have a Spider-Man: No Way Home trailer – and it seems like Peter Parker is in a proper pickle.

As speculated, the trailer confirms that Peter (Tom Holland) seeks out the help of Doctor Strange (Benedict Cumberbatch) after he was unmasked by Mysterio and J Jonah Jameson in Far From Home. Unfortunately, it doesn’t quite go as planned when he interrupts the spell Doctor Strange is casting, and causes some multiversal madness.

We knew that No Way Home would bring back the likes of Jamie Foxx’s Electro and Alfred Molina’s Doc Ock (who pops up in the trailer). However, it now seems as though Spider-Man’s got another classic villain to deal with: Green Goblin.

While we don’t see Willem Dafoe’s Norman Osborn in the trailer, we do hear his distinctive laugh and see one of his pumpkin bombs cause some serious damage on a bridge. The design is straight from Sam Raimi’s trilogy, confirming it’s Dafoe’s Green Goblin and not Dane DeHaan’s villain from The Amazing Spider-Man 2.

As with almost every other rumored star for No Way Home, Dafoe had previously given a ‘no comment’ answer about his possible return. “I got lots of stuff happening now,” he explained. “And, you know, I always feel like when a film comes out, that’s when it’s time to talk about it.”

Well, now maybe we’ll actually hear more from him about his role in No Way Home, but we assume that it’s not exactly the same Green Goblin from 2002’s Spider-Man. Like Doc Ock, Green Goblin was dead the last time we saw him.

As Doctor Strange points out in the trailer though, “The multiverse is a concept about which we know frighteningly little”. Could it be that it’s the same Green Goblin, but taken from his own timeline/universe before his death? Could it actually be a Green Goblin from another timeline? Or a Variant?

We haven’t got any answers for you right now, and we feel that we might not even know for sure until No Way Home comes out in December. We can, however, speculate that Green Goblin’s appearance spells some extra danger for Peter as he might not be alone… 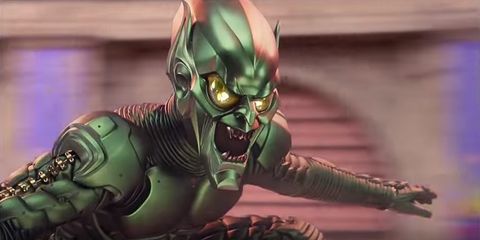 Another long-running theory about No Way Home is that it’ll see Spidey battle with the Sinister Six. With Green Goblin’s appearance confirmed, that means we know the movie will feature three – Green Goblin, Electro and Doc Ock – of the supervillain team, so could the others be on the way too?

Pretty much every other live-action Spider-Man villain has been rumored for No Way Home, including the likes of Thomas Haden Church’s Sandman and Paul Giamatti’s Rhino. The MCU also has other Sinister Six members if it wants to use them such as Michael Keaton’s Vulture and Michael Mando’s Scorpion.

Since they would all likely be from different universes, it’s hard to know what might lead to them teaming up in No Way Home – well, apart from a hatred of Spider-Man which is enough, we guess. We don’t know who the main villain of the movie is (if there even is one), so it could well be the Sinister Six.

And if there is a supervillain team-up in town, it would mean Spidey needs a lot of help and that could lead to the long-rumored appearances from past Spideys Tobey Maguire and Andrew Garfield.

Doctor Strange says in the trailer that Peter needed to “be careful what you wish for”, but if the Sinister Six and multiple Spider-Men happen in No Way Home, fans will get exactly what they wish for… and it’ll likely be glorious.