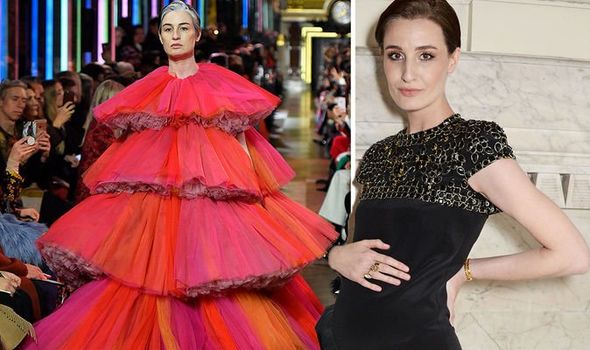 Supermodel Erin O’Connor, 43, has opened up about her experience storming the catwalk while heavily pregnant. The British-Irish fashion model stunned on the runway during Couture Fashion Week in Paris in 2019 while expecting her second child with partner Steve Gibson.

Reflecting on the incredible moment in an exclusive interview with Express.co.uk, Erin said: “It was an amazing feeling stomping on a runway when I was very heavily pregnant.

“It was strategically planned, the idea was to really embrace and show off motherhood.

“Just because you are pregnant does not mean that you cannot feel like an empowered and sensual woman.”

However, Erin also admitted that she did feel a bit anxious about “staying on her feet” while modelling the pink tulle gown by Schiaparelli.

Fortunately, the dress was so enormous in its structure that Erin could get away with wearing flat converse shoes to avoid any risky mishaps while walking on the “very polished floor” at the fashion house’s spring/summer 2019 couture show.

She added: “I had a beautiful gown to wear, and so big in its glory that I was able to wear flat converse shoes because the floor was very polished.

“And I was not going anywhere other than staying on my feet!”

Sharing a snap of herself in the jaw-dropping couture look at the time in view of her 83,000 followers, Erin wrote: “One last hurrah at the Paris Opera Garnier before the wee scamp arrives…

Erin had opted to keep her pregnancy under wraps until nearer to her due date.

She then debuted her baby bump at a party.

Erin explained: “Nobody knew. This is my first outing.

“It was a well kept secret. Thank God for all those winter coats.

“I just thought I’d come out with a bang.”

Erin also opened up about her work as an ambassador for The Borne Foundation and this year’s The Big Give Christmas Challenge.

Speaking about the vital work the charity does, the model said: “I was inspired to become an ambassador for Borne when I met The Founder, Mark Johnson.

“Mark has looked after me through my pregnancies, and it has not been an easy ride at all.

“However, I am very thankful to him and to all the people who work tirelessly at Borne to help women and families like me who have had their fair share of challenges, and in some cases, premature birth has resulted in death for the infant.

“I could not believe that there was such a lack of funding and awareness around this topic, so I welcomed the chance to become an ambassador for Borne.

“There is nothing more important in the world than giving babies a healthy start to life, which is something so often compromised when they are born too soon.”

Erin O’Connor is an ambassador for The Borne Foundation, one of the 900 charities which participated in this year’s The Big Give Christmas Challenge, the UK’s biggest online match funding campaign which this year raised £21.1 million www.thebiggive.org.uk