Skateboarding’s second Olympic event, the park contest, wrapped up Thursday in Tokyo, with few of the favored competitors making it to the podium. In the women’s contest, two Japanese women and a half-Japanese skater riding for Great Britain took medals — none of them old enough to drink in a U.S. bar. In the men’s event, an Australian 18-year-old got gold, with a Brazlian and an American following behind, respectively.

The park contest complements its “street” counterpart, which took place last week. Street is all about simulating a more commonplace built environment: the stairs, ledges, and handrails skaters (mis)use in the wild, to the consternation of security guards, property-owners and pedestrians. The park event takes place in terrain specifically designed for speed, acrobatics, and inversions, the evolved form of backyard pool and vert ramp skating. Casual skateboard spectators might have expected the uniform half-pipes of the X-Games era. But the park course, with its hodgepodge of steep rounded chambers and smattering of semi-functional obstacles, is closer to the immaculately constructed concrete skateparks that have proliferated in the last decade.

In short, the park contest was a lot more entertaining than Street. Some of this is because of the format: each skater in qualifiers and finals got three 45-second runs to lay down tricks. If they fell, regardless of how much time might be left on the clock, it was over. Street was a more baroque mix of timed runs and multiple attempts at best tricks that, even for hardcore fans, felt somewhat repetitive and perfunctory. Mostly though, regardless of the format, it’s just more fun to watch 12-year-olds and grown-ass-men hurl themselves as high as they can in the air, do little spins and flips and grabs, risk death on impact, then continue doing that for the better part of a minute. The highest score of the three attempts is the only one that counts. And while there was a lot of repetition as skaters did the same runs multiple times in the hope of gaming the judges’ scoring criteria, it was still way more engaging than the Street contest  — or 95 percent of other Olympic sports.

The women’s park contest also happened on Thursday, and similar to the street competition, it was dominated by young Japanese women. Team Japan won three of the top four places. The only outlier, bronze medalist Sky Brown, 13, competed for Great Britain, but was born in Miyazaki, Japan to a British father and Japanese mother.

Gold medal-winner Sakura Yosozumi, 19, won by executing a stellar run in the first heat, scoring high enough to maintain her lead through the rest of the contest. She blasted higher than most out of the ramp, landing back with enough momentum to keep speed for the duration of her run. The centerpiece of the routine were two back-to-back 540’s, a one-and-a-half rotation in the air. One was hands free (hard!), the other with a backside grab (also hard!). Each one is impressive, but seeing them one after the other was like watching a blindfolded calligrapher knit together a polysyllabic adjective.

The silver medal went to Kokona Hiraki, 12. Similar to 13-year-old gold medal-winner Momiji Nishiya in the Street contest, she consistently performed a variegated selection of technically sophisticated maneuvers — what skaters would call “a good bag of tricks.” Her airs weren’t the highest, her grabs not the most tweaked, but she repeatedly dug into her impressive stash with eye-pleasing tricks like kickflip indy grabs in deep transition and a properly stalled smith on a metal post above the ramp.

The scene stealer, though, was Sky Brown, a media darling who stands less than five feet tall and yet blasts high enough above the ramps as to seemingly defy the physics of her diminutive stature. Brown was one of the most fun contestants to watch for the same reason that icon Christian Hosoi was the most fun to watch in the 1980s: she manages to fly higher than she ought to be able to, and tweak (that is, bend or contort) her appendages into more radical expressions of grab tricks than seems possible. In the finals, her medal was in no way a sure thing: after an impressive qualifying performance, she bailed on her first two runs. With one shot left to get on the podium, she mixed up her routine, throwing in new tricks and sticking hard ones with panache. The crowd erupted. Her coaches erupted. The other contestants ran over to dog-pile into a group hug at the end. There were tears and cheers.

The mood was not quite as effervescent in the men’s contest the next day, although compared to the jockish stoicism of the men’s Street competition it was like the dance circle at a wedding reception.

Unlike the other three skateboarding contests, a Japanese citizen didn’t not win this one. 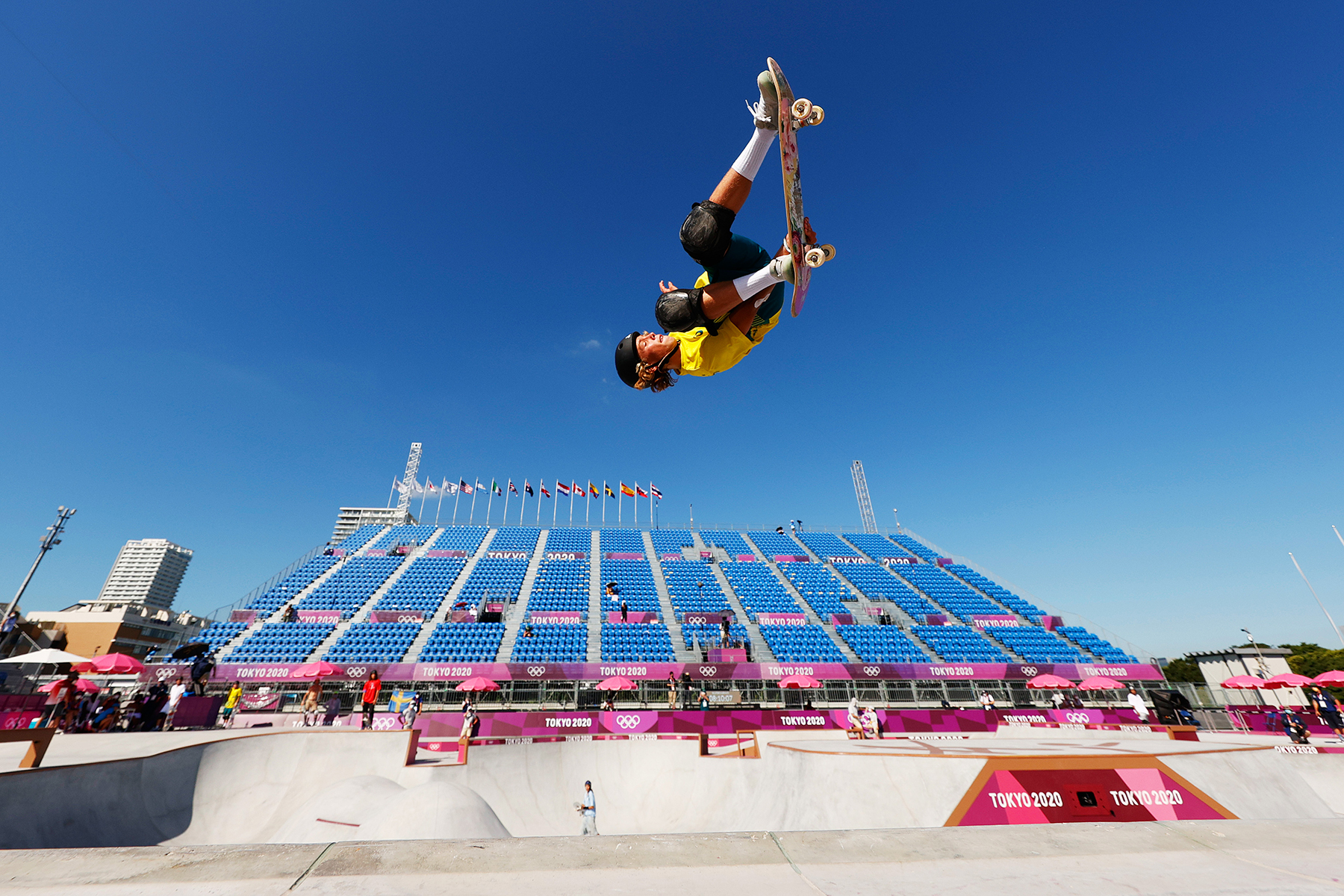 Keegan Palmer of Team Australia warms up prior to the Men’s Skateboarding Park Preliminary Heat on day thirteen of the Tokyo 2020 Olympic Games at Ariake Urban Sports Park on August 05, 2021 in Tokyo, Japan.

Gold went to 18-year-old Keegan Palmer, 18, of Australia, who posted a top score in his first run, then one-upped himself in his last attempt to the surprise and delight of seemingly everyone on the course. Palmer flowed through the park course like a surfer (which he is), hinging at the waist as he built speed, only to uncoil like a spring and propel himself further up the ramps. Without descending too far into technical jargon, he did a few slightly more impressive tricks on his last run than in his first that involved rotating his board and body high in the air, sometimes in opposite directions. When his top scores came in, he seemed genuinely surprised and grateful, dapping and hugging whomever was nearby.

At one point on the scoreboard, it seemed probable that all three medals would go to Brazilians, a powerhouse team that had, somewhat mysteriously given the empty stadium bleachers, a gigantic cheering section. Instead, Pedro Barros, 26, was the lone Brazilian on the podium, taking silver. Barros skates like the toughest dude at the locals-only DIY skatepark under a bridge, crouching low as if he’s ready to tackle something, carving at the top of ramps so fast it looks more like a trick than a transition, and soaring from end to end on long airs as though he sees a hidden off ramp toward a different destination than was intended. One could compliment the tricks themselves — the 540 stalefish, the revert out of a long feeble grind, etc. — but the highest praise for Barros’s performance is this: he skates like a guy who is about to fuck you up.

Bronze went to 22-year-old American Cory Juneau, who is a very good skateboarder, but moves with a style so casual as to appear bored. He posted a high score early, and seemed to try leveling up a little bit to protect his podium spot from the wolves nipping at his heels in subsequent runs. He executed the most technically sophisticated routines of anyone in the finals, but the trick selection seemed almost like it was reverse engineered to convince the judges of his well-roundedness, not built on imagination or joy. Even still, he did a frontside flip (the board flips, not the person, sadly) on a super steep bank that can only be described though the skateboard term of art “steezy.”

At the level of technical athleticism, the men’s event was an impressive spectacle: high, contorted airs over broad chasms, lots of semi-inverted twists and long, locked grinds on the vertical ramp lips. Feats of physical sorcery.

But, honestly: the effect was dulled seeing competitor after competitor rearrange the same two-dozen maneuvers, really competing over who could do them a little faster, a little higher, a little more hastily from one ramp wall to the other. The really impressive part is that these guys can do the same awesome feats in combination run after run, as if ignoring that any one of their tricks wouldn’t have won the day at every local skatepark. What’s lost, though, is the magic and suspense of wondering what might happen next. It’s skateboarding’s version of a gymnastics floor routine.

Perhaps the brightest spot of the park competition was the last move in the women’s event. Misugu Okamoto, 15, was in fourth place, gunning for the podium. Her last run would determine if she’d make it. She landed every trick, and right at the buzzer went for a giant kickflip indy grab. Midair, her lead hand missed the board, but she was so desperate for the make that she shot out her other arm, struggling to get her deck under her in time for impact. She succeeded, sort of. But basically sat on the board and rode it out on her butt, a spectacular miss. She knew in the air it wasn’t going to work, but went for it anyway, and her disappointment on the ground was palpable.

When she got out of the bowl and onto the deck she looked on the verge of tears, but a nest of fellow competitors formed around her, lifting her onto their shoulders in celebration. She had made the point at the heart of the whole exercise, gone as hard as she could until the very last.