In summer of 2020, when Yellowstone‘s third season came to a close, Kelly Reilly was in a precarious position. She had been, presumably, blown to smithereens. A box left in her office explodes, windows burst out, and there’s no Beth Dutton to be found. To get to the point, things weren’t looking particularly favorable for Montana’s favorite foul-mouthed businesswoman. Viewers thought they’d have an answer by now as to if Beth survives, but alas, the premiere date has been pushed back to November. Season Four of the show has already wrapped—shot entirely in a quarantine bubble. But that means there are zero leaks from the set to reveal if Beth is alive or dead.

With the next season set to premiere in a few months, fans have a long time to wait to learn about Beth’s fate. But, in the meantime, new fans can join the club, and old fans can re-watch, now that Yellowstone will be streaming exclusively on Peacock. In recent years, when shows jump from traditional cable networks to streaming services, they often double down on their popularity. When Schitt’s Creek landed on Netflix, new fans had time to devour three full seasons before tuning in for the fourth. Now new Yellowstone fans can do the same, and with Yellowstone boasting its position as cable’s highest rated summer series, that means Season Four has the potential to eclipse the records already set by the Taylor Sheridan series.

With a few more months of hiatus ahead, Kelly Reilly hopped on the phone to discuss Beth’s explosive third season, the important stories woven into Yellowstone, and just how long she knew about Beth’s big Season Three reveal.

So often in Westerns, we have good guys and bad guys that we want to root for, but Yellowstone really subverts that. Do you think that there could be a happy ending for these people? Or are they just kind of doomed to this grim fate?

Kelly Reilly: Gosh, that’s a good question. I think it’s one that I ask Taylor [Sheridan] constantly, “Where’s the end?” As an actor, especially one that’s been put through hell and back with a character like Beth, I was like, “What’s the end game?” And there’s a big cliffhanger obviously at the end of season three. Obviously I can’t tell you whether or not Beth makes it another day, to see if she finds that peace that you talk about. But it’s an interesting question with any character. Is happiness something that is an ultimate end goal? Or is it something that kind of… there are moments of it in all our lives and days and… it doesn’t last. It’s like you touch it and you don’t try and hold on to it. I think there’s a great William Blake quote about that.

I see those moments of happiness for Beth, especially in Season Three. At the beginning of Season Three, there is a sort of quiet, healing vibe going on. Beth and Rip (Cole Hauser) are living in the new house that they’ve been given, that John Dutton (Kevin Costner) gave to Rip. Beth has moved in and there’s a little bit of domestic quiet, gentleness that’s sort of creeping in which we’ve never seen Beth inhabit. I found those scenes really interesting to play. Whether it lasts or not, it wouldn’t be a drama if it was constant. I don’t think that we’re at the happy ending stage yet, but I think there’s a glimmer of happiness and where that happiness and where that peace could live, you know what I mean?

I love that you said that because I think one of the most interesting things in watching Rip and Beth’s dynamic is that they both found each other in such broken places over and over again.

But I’ll tell you what, as much as I have enjoyed watching your character, seeing Rip dig up his dead mother’s body for a ring that he wanted to give Beth threw me for a loop.

Well, that’s Taylor Sheridan. He’ll find that incredibly beautiful. You know what I mean? His take on it is that, I mean, I don’t want to speak for him or Cole, but it feels right for the character. He doesn’t have money to go buy Beth a ring. Beth could buy herself diamonds if she wants. Beth doesn’t need anything. The whole him getting down on one knee, and someone videoing it? Beth couldn’t give a fuck about anything like that.

When you think of a Western, it’s not the first genre to come to mind when you think of tackling really difficult topics. Your character has been at the center of so many, just in Season Three. I mean, the forced sterilization plot line alone was so incredibly powerful. What was your response to that?

Well, I knew about what had happened between Beth and Jamie from Season One. Taylor has this whole thing planned out in his head. I mean, obviously, when he writes, I think he’s very open to things. It almost writes itself. He doesn’t know what’s necessarily going to make it on the page, but he has an overall kind of epic beginning, middle, and end for all the characters, and in the world of Yellowstone. I questioned him because I needed to know why Beth was so—it was more than just not liking her.

I was like, “Okay, there’s enough for her to be fierce about him, but there’s something deeper. There’s something else. There’s something really at the core of it, something really painful.” I needed to know what that thing was in order to play these scenes with him. This isn’t just sibling rivalry. Taylor told me. He told me what it was. I’ve always known since Season One pretty much what that was. When people were hating on Beth going, “She’s awful to Jamie.” I was like, “Gosh, if you only knew.” I was so thrilled that it was actually going to come out in a storyline to kind of explain it. I love that he uses flashbacks and their history. He doesn’t give it to you all at the beginning. There’s more to come. There’s way more to come. You think that’s it, there’s a lot more history. There’s lots of ghosts in this show. 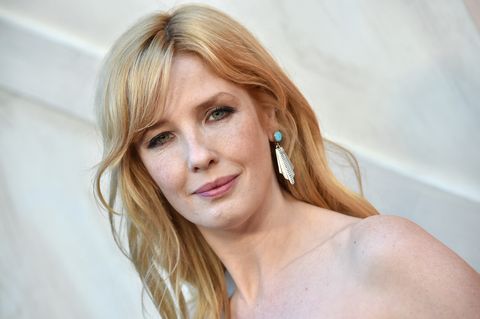 I was also going to ask you about the discussion of indigenous women going missing. What Yellowstone does, in my opinion, so well is they present it, but they don’t just dump the entire bucket. It’s just a little bit at a time. I think that makes it resonate so much more.

Thank you for bringing that up. It’s something that when I do interviews for the show, people don’t really touch on. Especially not with me, but it’s something that is one of my, the things that I’m so proud of to be part of this show. I think for a long time they just assumed this was a show about cowboys and rednecks and, “This is our land.” Actually, if you kind of pay attention the people that [Taylor Sheridan] shows so much respect and love for in the show is for the Native Americans. He has a deep history with that personally in his life. Obviously if you’ve seen his other films like Wind River, this is a theme in his work that he’s so passionate about. For him to draw attention to that, and to put that into the living room of so many Americans who don’t necessarily want to look at that part of our history, it’s uncomfortable. But I’m so glad that he is. I feel like it’s without being preachy, I think it’s really, a really important thing to know about.

But I do like the fact that there is not that self-righteousness in our show. We’re playing characters and we’re not trying to be too sort of, dare I say it, “woke” about things. If we get into that area, I’m not really interested. I’m interested in complicated and messy and human, and the sort of things that we all can, “How can we find these characters so sort of enthralling and intriguing when they’re kind of so bad?” It’s a fantasy. These characters are sort of fantasy. I love that.

Now, speaking of the removal of PC culture, I need to talk to you about some of your line readings: “new boyfriend, big ass ashtray, give it a shot” is a personal favorite.

Honestly, and I know actors say this all the time, it is a feast for me. It’s such an honor to be able to get closer to the edge of things when Beth gets to the point where you’re like, “Oh, that’s a bit too much.” “Oh, should I just stop on that a little bit?” That’s when I’m in the sweet spot of where Beth exists. If I step off it, then that’s not true to who it is. I can do several different takes where I can soften something, or I can really go full pelt at something to give them options in the edit. Ultimately, they always pick the harder version, the tougher version, the more explicit.