The first Men in Black film, released in 1997, had its strong points, but originality wasn’t one of them. The direct source material was a comic book by Lowell Cunningham, but the premise of a couple of secret agents assigned to monitor extraterrestrial life on earth could also be linked to Ghostbusters, The X-Files and The Hitchhiker’s Guide to the Galaxy. 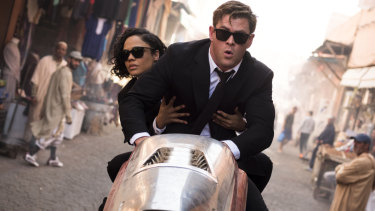 Indeed, part of the film’s appeal lay in its modesty and familiarity, enabling Barry Sonnenfeld to present weirdness – the prospect that there might be an alien lurking around every corner – as a fact of life.

The other part lay in the chemistry between the surly, middle-aged Tommy Lee Jones and the young, irreverent Will Smith, a recognisably human mismatched duo in the midst of all the wacky special effects.

All of this relied on Sonnenfeld's light, playful touch. By comparison, in the fourth entry in the series, Men In Black: International, the uninspired approach of director F Gary Gray (Straight Outta Compton) does nothing to mask the staleness of the formula.

But the one reason to consider seeing the film is Thompson, who … is impressively convincing as a wide-eyed yet brainy ingenue.

Standing in for the absent Smith and Jones are Chris Hemsworth and Tessa Thompson as a couple of younger representatives of the London branch of the Men in Black taskforce, with Liam Neeson as their crusty overseer.

The plot follows Thompson’s character, eventually code-named Agent M, as she joins up with the Men in Black, a dream she has tenaciously pursued since childhood. Once on board, she’s paired with Hemsworth’s more experienced Agent H, a charming rogue who shows her the ropes while gaining from her more disciplined approach.

Together they go jetting around the globe in pursuit of an alien menace known as the Hive – in many ways an orthodox spy caper plot, setting aside the fact that the friends and foes encountered en route might have fur, scales or an unusual quotient of limbs.

It’s hard to say what, if anything, Gray responds to personally in this material. Nothing in his career suggests a bent for conceptual science fiction humour, and his action sequences have a flatness that suggests he started out filming the actors without much of a visual plan, beyond the assumption that the real excitement would be added by computer later on.

Of the digitally generated extraterrestrials, the most prominently featured is the pocket-sized Pawny (voiced by Kumail Nanjiani), a literal pawn from an alien chess game, who resembles a pudgy green elf and comments on the narrative in a stream of non-wisecracks.

As wacky sidekicks go, he’s not much more appealing than Jar-Jar Binks – and there’s an off-putting edge to the depiction of his seemingly hard-wired servility, in a context that implicitly equates visitors from other planets with newcomers to the West.

The double meaning of the phrase “illegal alien” points to a subtext which has run through the series from the outset. But Gray is not at all interested in exploiting the potential for topical satire: he tends to veer away from anything even potentially controversial, even when it comes to the recurrent gag of revealing which celebrities are extraterrestrials in disguise.

A partial exception arises early on, with the hint of a #MeToo theme: Agent H is forced to use his sex appeal, which apparently extends beyond this planet, to get himself out of a jam, then encourages his new partner to do the same.

But even this is dropped once the relationship between the protagonists becomes one of mutual professional respect, admirable from a “role model” perspective but not very productive for the kind of comic tension that can power a movie.

Hemsworth clowns around amiably in a role which rehashes his well-spoken jock persona from Thor, the appeal lying in the fantasy of alpha machismo made harmless. But the one reason to consider seeing the film is Thompson, who despite being the same age as Hemsworth is impressively convincing as a wide-eyed yet brainy ingenue.

In the scene where the future Agent M first enters the secret Men in Black headquarters, Gray wisely keeps cutting back to her reactions, which silently convey a range of emotions – awe, amusement, bravado, first-night nerves – far more compelling than any of the supposed wonders of the galaxy which surround her.