Did you lose track of the story amid the non-stop spectacle? We’ve got you covered 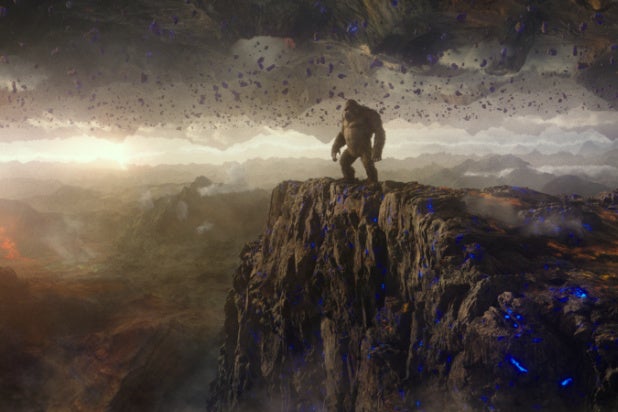 (This article contains detailed story spoilers for “Godzilla vs Kong”)

What with “Godzilla vs Kong” being the culmination of the Monsterverse franchise, you might have been surprised to learn that it’s under two hours long — a rarity in this age of lengthy megablockbusters. But there is a price to that sort of efficiency.

I’ve watched “Godzilla vs Kong” a few times now, and it’s pretty clear that we ended up with a pretty slimmed down version of this story. It’s a point made with emphasis when Lance Reddick shows up late in the film to deliver a single unimportant line before being completely forgotten. It’s tough to imagine Reddick wasn’t supposed to have a significantly larger role.

Likewise for Kyle Chandler’s character, who returns from “Godzilla: King of the Monsters” and does absolutely nothing at any point. My guess is that they only kept him in it as much as they did so he wouldn’t seem like a completely negligent father while Millie Bobby Brown runs around the world getting into bad trouble.

And on top of that, we’ve got a character named Ren Serizawa (Shun Oguri), clearly the son of Ken Watanabe’s Dr. Ishiro Serizawa from the last two “Godzilla” movies — but no one ever even acknowledges any relation or even that they have the same name.

The point being just that clearly there was much more going on with these characters at some point during production, but they were almost certainly cut down for the sake of efficiency.

Despite the obviously, uh, streamlined plot, “Godzilla vs Kong” actually does make narrative sense. But that sense is buried beneath cursory explanations for some weird sci-fi concepts. The scene where Hollow Earth expert Dr. Nathan Lind (Alexander Skarsgard) meets Walter Simmons (Demian Bichir) and Serizawa, for example, introduces three new pseudoscientific concepts in a row, and it can be difficult to keep track of them. Especially in the midst of all the spectacle this movie has to offer

So don’t feel bad if you aren’t sure what exactly was going on in this movie. We’ve got your back with a rundown of the main story. Because, seriously, it does all make sense, at least in this fictional version of reality. We’re gonna focus on the core stuff here, as this is not about recapping everything that happened in the movie. Let’s dive in.

The inciting incident in “Godzilla vs Kong” occurs when Godzilla attacks Pensacola, Fla. — or, more specifically, he attacks an Apex Cybernetics lab there. He attacks because Apex is building a Mechagodzilla, a giant robot that can go toe-to-toe with Godzilla and other Titans. One of Mechagodzilla’s eyes is in the lab, and it’s putting out a signal that Godzilla doesn’t like. You’ll remember that whole deal in “Godzilla: King of the Monsters” with the Titan sounds that can calm or rile up other Titans — this eye is issuing an alpha signal, basically daring Godzilla to come at it.

Then we get the previously mentioned meeting with Dr. Lind, and the plot kicks in. Simmons wants to recruit Lind because he’s an expert on Hollow Earth stuff, and Simmons wants to get down there. Lind and his brother apparently mounted an expedition to get there. But his brother died, and Lind apparently gave up the dream after that.

The first thing: inside the Hollow Earth is some kind of energy source, or radiation, that is the reason why Titans are the way they are. Basically, this energy fuels an ecosystem inside the Earth that is completely distinct from that of the surface. Simmons wants it, he says, because with that energy they could potentially have a fighting chance against Godzilla should he continue his attacks.

He doesn’t tell Lind about the Mechagodzilla, of course. Whatever normal energy Apex had been using to power the thing wasn’t getting the job done, and Simmons thinks the key to unlocking its potential lies in that energy.

The second thing: Lind’s brother died when his craft hit a “gravitational inversion” that flattened him and his crew in an instant. Lind never elaborates on this “gravitational inversion” thing, and this is not a real scientific concept, but we can infer that his inversion is when gravity shifts from pulling you toward the interior of the Earth and instead starts pulling you outward. The Earth in “Godzilla vs Kong” is like an egg, with one world on the outside surface, and one inside of the shell.

The reason this isn’t a real concept is because the concept of a Hollow Earth actively defies the laws of gravity in a big way. So we can’t really even try to explain it any further. But suffice to say that in this movie’s version of physics, this gravity transition is extremely tough to get through.

But Simmons has that handled, as his company has designed a ship that can handle the stress. So they can get down there, but they don’t know where to go once they’re there if they wanna mine that energy.

The third thing: Lind suggests that perhaps Kong could lead them to that Hollow Earth energy, thanks to “genetic memory” — basically the kind of thing that tells birds where to migrate to and whatnot. Lind thinks that if they give Kong a push down into the Hollow Earth, he’ll feel a compulsion to return to his ancestral home, which could very well be powered by some of that energy.

To sum this scene up: Simmons has built some ships that can fly into the center of the Earth, and he wants Lind, a Hollow Earth expert, to lead the expedition to retrieve a sample of the magic blue Titan energy. And Lind, not yet aware of Mechagodzilla, is happy to help and volunteers Kong’s services.

So Lind goes to Skull Island, grabs Kong and his handler and the little deaf girl who is Kong’s best friend, and they go to a big hole in Antarctica that leads down to the Hollow Earth. Everything goes exactly as planned. They survive the gravitational inversion, and once they arrive in the Hollow Earth Kong protects them and leads them straight to what looks like an old giant monkey temple built into a mountain.

But then things go wrong. The Apex folks who made the trip get what they came for, a sample of the magic blue energy. Conveniently, they don’t have to physically take the sample back to the surface. Apparently, a simple email containing the “energy signature” is good enough. Back on the surface, Simmons and Serizawa are immediately able to use that signature to start charging up the Mechagodzilla. And the real Godzilla blasts a hole in the Earth to get Kong’s attention.

While Kong fights, Simmons gets Mechagodzilla ready. Serizawa wants to wait, because they don’t know how all this stuff really works. But with Kong and Godzilla duking it out in the middle of Hong Kong — the same place where Mechagodzilla was built — Simmons chooses to seize the moment.

The method Apex has for controlling Mechagodzilla is pretty strange. They have one of Ghidorah’s skulls — you remember the three-headed beastie from “Godzilla: King of the Monsters” — and they’re using it as a living supercomputer and telepathic link, presumably because controlling something so massive would be impossible with normal tech. And to control the thing, Serizawa sits inside of it and uses some kind of VR setup.

But things go very wrong when they funnel the Hollow Earth energy through Ghidorah’s skull. Serizawa is killed, and Mechagodzilla starts doing his own thing. “Godzilla vs Kong” never really tries to explain what happened there, instead just having Millie Bobby Brown make a comment about it having a mind of its own.

My assumption is that what happened with Mechagodzilla is pretty similar to the story of Galvatron in “Transformers: Age of Extinction.” Stanley Tucci’s character uses Megatron’s corpse to try to make a new, better Transformer called Galvatron that he can control so they can hold their own against the real Transformers. But when they power it on, it turns out Megatron’s soul was still in there, and he took full control over his new body.

I think the same thing happened with Ghidorah’s “essence” or whatever in the skull. It’s not a normal first impulse to immediately start wrecking everything — unless you’re Ghidorah, whose entire deal was literally just wrecking everything. But there’s one alternative explanation, which I’ll also use a “Transformers” reference to explain. The energy could simply spark life, like the AllSpark in “Transformers” that brings random electronic objects to life. In that movie, these new baby Transformers immediately start lashing out. And I guess it’s possible that’s what happened here at well.

But I think the soul theory is much more likely, to be honest.

Once Mechagodzilla emerges, Kong and Godzilla put aside their differences and take the robo-baddie down. They have a tenuous peace afterward, with Kong seemingly moving full time down in the Hollow Earth with Godzilla presumably resuming his patrol of the oceans on the surface.

And that, more or less, is all the key points of the plot of “Godzilla vs Kong” laid out before you.