What do filmmakers see when they look at animals? Not much, apparently: For the most part, animals in movies are atmospheric background — a solitary cat in a window, a horse in a field glimpsed from a car. Occasionally they are symbols, like the many sacrificed bunnies of cinema (“The Rules of the Game” et al.). At other times, animals are cast as favorite companions, and plenty of dogs have played good boy onscreen. Yet even in films as distinct as “Old Yeller” and “Best in Show,” animals are usually in service to the human story, to our feelings and tears.

The astonishing documentary “Gunda” offers another way of looking at animals. Sublimely beautiful and profoundly moving, it offers you the opportunity to look — at animals, yes, but also at qualities that are often subordinated in narratively driven movies, at textures, shapes and light. It’s outwardly simple: For most of its 93 minutes, the movie focuses on a sow and her piglets. In a short section we roam with chickens, including an impressively agile one-legged bird. In another, cows gallop into a misty field to graze, an interlude of pastoral dreaminess that invokes other representations — in novels and landscape paintings — yet is itself visually transfixing.

“Gunda” is a passion project of the Russian director Victor Kossakovsky (“Aquarela”), who wanted to make it for years. (Funding movies is always difficult; doing so for documentaries like this is heroic.) His approach was straightforward yet ingenious. Shooting in black-and-white digital, with no music, voice-over or onscreen text or people, he opens an intimate window onto the lives of animals. His star, as it were, is Gunda, a prodigious sow of uncertain age who, when the movie opens, has just given birth to a litter of a dozen or so piglets. Although there’s a tag fixed to her ear, the roomy enclosure suggests that they’re not being factory farmed — a relief.

Kossakovsky found Gunda on a Norwegian farm not far from Oslo, on what he has called the first day of casting. Once she was in place, he and his team constructed a replica of her enclosure that allowed them to shoot inside while remaining outside. As you soon discover, this setup gave them an intimate vantage point without, presumably, bothering the inhabitants too much. (Kossakovsky has said that he used a stationary disco ball — never seen, alas — to light the interior.) The filmmakers also laid down dolly tracks outside the pen so they could follow Gunda and her litter as they rooted, played, wandered and sunned outdoors. 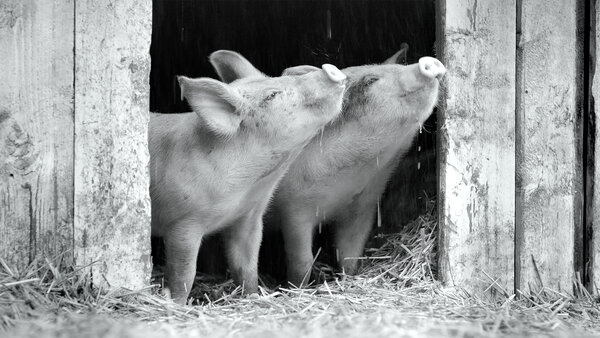 The results are spellbinding. The movie opens with Gunda lounging (a preferred pastime) on a bed of hay, her body inside the enclosure and her head framed in the doorway. It’s pig heaven. Kossakovsky — who shared cinematography duties with Egil Haskjold Larsen — holds on the still shot long enough for you to admire its lapidary detail and compositional symmetry. And then: Action! As the camera pushes in, a piglet about the size of one of Gunda’s ears scrambles over her head with piping squeals and slides onto the hay outside. And then, as big mama rhythmically grunts, another piglet and then another scales her epic head and tumbles into the world.

Not much seems to happen beyond squeals and adorableness. Yet the scene’s spareness is deceptive, which is true of the entire movie. Newborns of any species tend to be delightful, and the piglets — in their tininess and charming ungainliness — prove natural-born scene stealers. Their size helps draw you toward them and even causes you to fret. They’re so small and their mother is so very, very big. Kossakovsky may not be telling an obvious story but he is communicating oceans of meaning cinematically, using images to create cascading associations, starting with the shot of the piglets emerging from the dark door, a visual echo of birth itself.

You stay with Gunda and her piglets for a while, during moments of quiet drama, blissful play and nail-biting tension. Kossakovsky shot the movie over a number of months, so the piglets grow by spurts, though never — meaningfully, as you discover — very large. Throughout the scenes of the pigs, and also those of the free-ranging chickens, Kossakovsky mostly keeps the camera at their height, rather than staring down. As Gunda plows her snout in the earth, you see how different the world, the dirt itself, looks from the Lilliputian angle of these beings. These images testify that to see, really see, through the eyes of others, four-legged or otherwise, is to be fully human.

Kossakovsky isn’t waving any flags, but “Gunda” is a reminder that the resistance to showing animals in most movies reflects how we no longer look at them, to borrow a thought from the critic John Berger. It also speaks to our unwillingness to acknowledge our abuse of other creatures and, by extension, the natural world. It is, for instance, awfully easy to eat meat; in the developed world, it requires little thought, effort or money. It’s more difficult and certainly more inconvenient to think about the violence inherent in its production, including the environmental devastation. And so, cut off from the natural world, we largely classify animals as pets or meat.

In his moving, prophetic 1977 essay “Why Look at Animals?,” Berger considered the tragic costs of humanity’s putative march toward progress and away from the natural world. “To suppose that animals first entered the human imagination as meat or leather or horn is to project a 19th-century attitude backwards across the millennia,” Berger writes. “Animals first entered the imagination as messengers and promises.”

Animals were companions in our caves. We looked them in the eye and they looked back. Over time, we put animals — nature itself — at a greater remove. We stopped looking. Yet as Kossakovsky reminds us, even as he spares us the ghastliness of the slaughterhouse, we need to look at animals to honestly see what we have done.