Throughout “Rolling Thunder Revue,” the new film by Martin Scorsese chronicling Bob Dylan’s celebrated barnstorming tour in the fall of 1975, the participants struggle with how best to describe the event. It was like a “con man, carny, medicine show of old,” says Allen Ginsberg; “a circus atmosphere, dog and pony show,” says Sam Shepard; “an experiment in communal existence,” says Joni Mitchell.

In the movie, in theaters and on Netflix this week, Dylan himself starts to explain, saying that he wanted to do something “in the traditional form of a revue,” before cutting himself off.

“I don’t have a clue,” he says. “It’s about nothing, it’s just something that happened 40 years ago. I don’t remember a thing about Rolling Thunder — it happened so long ago, I wasn’t even born.”

This unexpected response sets the tone for an unconventional film about an unprecedented tour. The year before, Dylan had returned to the road for the first time in nearly a decade, accompanied by the Band for a series of concerts that broke ticket-sales records but proved musically unsatisfying. In his autobiography, Levon Helm of the Band wrote that the tour “was damn good for our pocketbooks, but it just wasn’t a very passionate trip for any of us.”

Dylan returned to Greenwich Village and started turning up at clubs, seeking out the sense of musical adventure and community that had initially drawn him to New York City. He assembled a new band of young unknowns, recorded what would become the “Desire” album and dreamed up a different way to tour.

Roger McGuinn, formerly of the Byrds, recalled in a recent telephone interview that when Dylan visited him at his Malibu home, “he said he wanted to do something like a circus, but he didn’t elaborate.”

The Rolling Thunder Revue hit the highway, booking halls in New England and Canada a few days in advance and selling its own tickets. Dylan’s boyhood friend Louie Kemp, who made his fortune in the seafood business, served as tour manager, and over 40 days, the top-billed Joan Baez, Ramblin’ Jack Elliott and Bob Neuwirth and others played 31 shows, some stretching four hours long, in 23 cities. (The tour nominally picked up again in 1976, playing bigger venues in the South and West. The film is accompanied by a 14-CD box set with performances and rehearsals from the first tour.) 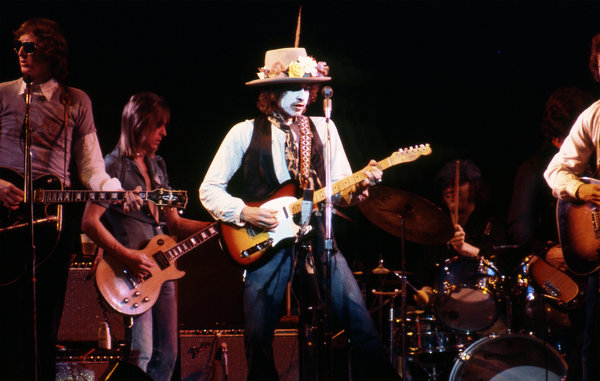 “I think the tour was unique in that it tried to expand the conventions of what a music show would be at that time,” Scorsese wrote in an email. “So there were poets, filmmakers, playwrights, and all sorts of different musicians.”

The team behind the new movie decided that such an unusual expedition required something beyond a linear documentary. Most notably, the film creates several fictional characters. They represent some of the archetypal figures that surround a rock ’n’ roll tour and are included without comment alongside interviews with Rolling Thunder alumni.

Sharon Stone (credited as the Beauty Queen) recounts being brought backstage as a teenager. Jim Gianopulos, the chairman and chief executive of Paramount Pictures, acts the part of the Promoter. In a kind of filmmaking in-joke, Michael Murphy reprises his role as Jack Tanner from the HBO series “Tanner ’88,” appearing as an idealistic young congressman “caught between two generations” who attends a Rolling Thunder show with help from Jimmy Carter.

One obvious issue is why so much footage exists of the tour, both onstage and off. The truth is that along the way Dylan was making a largely improvised film, which was released as “Renaldo and Clara” in 1978 and savaged by critics. (The original negatives were lost, so Scorsese’s team painstakingly restored the work print, striving to clean the images but retain the grit of vintage 16-millimeter film.)

Rather than get into that story, though, we are told that a filmmaker (played by Martin von Haselberg) was shooting a self-financed movie “about the America of Pet Rocks and Super Slurpees,” but wound up antagonizing the musicians; von Haselberg’s voice is even cut into several quick backstage exchanges.

“When you are working in the midst of a large project, everything around the edges becomes a blur,” said Scorsese, who also directed “No Direction Home,” the 2005 Dylan documentary. “Characters come and go, and you are not sure exactly what they are doing, but you sense their presence.

“We wanted to recreate some of that feeling, but at the same time we also wanted to expand the boundaries of what this kind of film could be. You see it all the time on news shows and in contemporary films of this nature. There will be an animated segment or a recreation. All ways of getting at the truth. We wanted to take that one step further.”

This treatment may prove controversial as history, but it’s certainly fitting for a tour that was largely identified by its theatrical structure and use of masks and makeup.

The Grammy-winning producer T Bone Burnett’s first real experience on the road was as a Rolling Thunder band member (“In many ways, the rest of my life has been downhill since then”) and his first memory of the tour involved women with racks of costumes and masks. “It was clear this wasn’t going to be a regular, earnest folk-music tour,” he said in a phone interview. “We began playing with reality from the very beginning.”

As Dylan, Shepard (who served as an on-the-fly screenwriter) and the others spontaneously came up with scenes for “Renaldo and Clara,” revue members turned up in unlikely locations that are among the highlights of the new movie. Dylan and Ginsberg visit Jack Kerouac’s grave in Lowell, Mass., and the beat poet reads his epic “Kaddish” to the women of a mah-jongg club. In one extraordinary sequence, Joni Mitchell — who says she “wanted to come see a concert and got sucked into it” — plays an early version of her song “Coyote” at a party at Gordon Lightfoot’s house in Toronto, accompanied by Dylan and McGuinn. “Every night was like that, it was like a two-month party,” McGuinn said.

The heart of “Rolling Thunder Revue,” of course, is the concerts — about a dozen full songs, including searing, riveting versions of “Isis,” “A Hard Rain’s a-Gonna Fall,” and “The Lonesome Death of Hattie Carroll.” These performances reveal just how energized Dylan was, how he had recommitted to his material at a time when music was in a phase of safe, corporate bloat.

“In 1975, the music business had gotten very commercial,” McGuinn said. “Bob came from a more organic time, and I think in his heart he was trying to recapture the good time of art over commerce.”

Scorsese said his intent was to carry that approach into the film. “What we did was try to use that same spirit that existed on the tour,” he said.

At the end of “Rolling Thunder Revue,” Dylan is asked what remains from the tour. “Nothing. Not one single thing. Ashes,” he replies. But earlier in the film, he offers something (paraphrasing a quote often attributed to George Bernard Shaw) that gets at the inspiration for not just these shows, but also the constant in his life’s work.