Harvey Keitel stars as the underworld financial wizard in this dramatization. 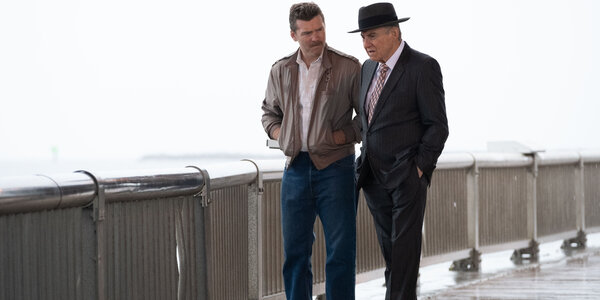 The best thing in “Lansky” is Harvey Keitel’s turn as the gangster Meyer Lansky. Eager to change the popular perception of his career, and dying of lung cancer, he agrees to tell his story to a writer in 1981.

The way Keitel plays Lansky makes it difficult to distinguish cordiality from coldbloodedness. In a delicatessen on his home turf in Miami, Lansky orders tongue sandwiches and quickly lays out the rules for the writer, a fictional character called David Stone (Sam Worthington): He can’t use a recorder. Everything is off the record unless he is told otherwise. And making clear that he knows all about the writer’s life and family, Lansky warns Stone that if he violates their agreement, “there will be consequences.”

The heart of this movie, directed by Eytan Rockaway, is the relationship between the writer and his subject. So it’s dismaying when “Lansky” turns out to include flashbacks, with John Magaro (“First Cow”) playing a much flatter version of the mobster as a young man.

In his obituary, Lansky, who died in 1983, is described as the “reputed financial genius of the underworld,” with his fingers presumed to be in bootlegging, gambling in Cuba and other rackets.

The gangland clichés can be cringe-worthy at times, particularly when the film emphasizes Lansky’s Jewish background. “If you need any weapons or ammunition, you let me know,” he says after slipping cash to an emissary for the future state of Israel. And no one should ever again score a montage of killings to “Hava Nagila,” as Rockaway does at another moment.

The 1981 scenes without Keitel are similarly useless. F.B.I. agents search for hidden money. Minka Kelly plays a guest at Stone’s motel with obvious ulterior motives. And the ending, in which Stone ponders what he learned from Lansky — “We measure ourselves through the eyes of the ones we love” — is a baffling detour into soppiness. Like “Bugsy” (1991), “Lansky” concludes with bizarrely upbeat onscreen text noting the positive economic impacts of the gambling industry.

Lansky
Rated R. It’s not personal; it’s only business. Running time: 1 hour 59 minutes. In theaters and available to rent or buy on Google Play, FandangoNow and other streaming platforms and pay TV operators.