This Was the Least-Watched Broadcast TV Show in March

“You can get everything from streaming these days … but you go to a record store, that’s where the real fans are,” says a USC musicologist

On Thursday, independent record store Amoeba Music, which closed its doors at 6400 Sunset Blvd. last spring after almost 20 years in operation, re-opens to the public at a new location about a half-mile away at 6200 Hollywood Blvd. “I hope they don’t make it too nice — it should maintain its funky vibe,” veteran L.A. music journalist and critic Randy Lewis joked to TheWrap.

However, Lewis, who covered the pop music scene for almost 40 years for the Los Angeles Times, isn’t worried that Amoeba won’t still be Amoeba in its new digs. Both locations are in the heart of Hollywood’s music industry, which includes the iconic Capitol Records Tower at 1750 Vine St. “It is still part of the continuum of the old Amoeba at Sunset and Vine,” Lewis said. “There’s something about that geography. It’s hallowed ground.”

It may be difficult to describe the new Amoeba as “funky,” however. The 23,000 square-foot space is located on the corner of Hollywood and Argyle in El Centro, a residential and retail complex that opened in 2018. The airy new multilevel location features rainbow-colored columns guiding visitors to different sections and self-described “visual flourishes,” including the color vinyl LP installation at the front door and an original Shepard Fairey mural created for the Amoeba stage.

Amoeba opened on Sunset Blvd. in 2001, where it became a go-to location for music lovers as record stores, including the Tower Records chain, closed down amid the growing popularity of digital music and streaming. In 2015, the store’s building was sold to a developer that began plans to replace it with a 26-story complex. Amoeba announced plans to relocate to a new store in Hollywood, and in early 2020, announced the shop would move to 6200 Hollywood Blvd.

Amoeba’s owners had planned to say goodbye in style with send-off events at the original store, but the pandemic nixed those plans. During the pandemic, Amoeba launched a GoFundMe campaign in order to ensure that 200 employees at the L.A. store, and another 100 employees at its Berkeley and San Francisco locations, could keep their health insurance through the shutdown. The campaign raised $300,000.

Jim Henderson, co-owner of Amoeba Music, said given the broad-based suffering caused by the COVID-19, giving up a few parties doesn’t mean much now. He also told TheWrap the new location offers some advantages, including a better floor plan that has eliminated “dead areas” and allows better visibility between specialty areas.

“We can kind of reconstruct the Amoeba shopping experience for a new generation. We have been able to kind of rebuild with years of knowledge of what people really respond to and are interested in,” Henderson said. 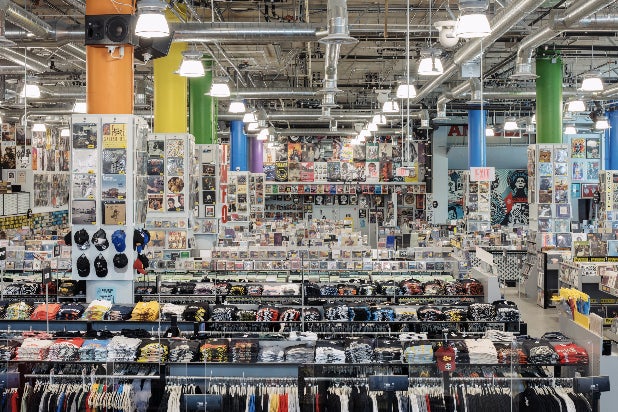 Henderson said Amoeba will continue its signature trading counter, where visitors can sell used records and CDs or trade them for store credit, although pandemic restrictions will require separating the sellers from the buyers for the time being. He added that the new stage won’t be used for performances until restrictions on live indoor performance venues are lifted.

When it comes L.A.’s record shops, music experts have their individual favorites. Robert Hilburn, former chief pop music critic for the Los Angeles Times, told TheWrap he frequents FreakBeat Records in Sherman Oaks. “It’s got a warm, friendly vibe, with customers who love to talk about and debate their favorites,” Hilburn said.

However, Amoeba has an undeniable cachet as a place not only to peruse an eclectic collection of new and used records and movies, but also as a venue for more than 100 pop-up concerts, album signings and book signings, including a handful of performances by some of music’s biggest stars.

“You had this incredible depth of selection, but they made this incredible platform for artists to be able to come in and showcase their music, and that made it much more special,” Lewis said.”It really felt like a showcase, and invested (Amoeba) in the music community.”

Lewis was there when Paul McCartney and his touring band played an intimate show at Amoeba Music in June 2007 as part of the promotion for McCartney’s “Memory Almost Full” album. The performance was later released in November 2007 as “Amoeba’s Secret,” a limited edition 12” vinyl record, and again in January 2009 on CD. The complete Amoeba Gig show finally released 2019 on CD, vinyl and digital download.

“It was a once-in-a-lifetime opportunity,” Lewis said. “The fact that they were able to get Paul McCartney in there showed you just how significant it had become in the whole L.A. music scene, with Hollywood being the heart of the recording industry.”

Scott Spencer, assistant professor of musicology at USC’s Thornton School of Music, said Amoeba Music is likely to remain the kind of place where magic happens, regardless of location. He recalled that one of his students, a classical violinist, went to Amoeba for field research and ended up walking in on a CD launch solo concert by one of the members of the band Vampire Weekend. An impromptu conversation between the student and the band member led to the violinist joining a Vampire Weekend international tour.

“That’s the kind of stuff that goes down at Amoeba,” Spencer told TheWrap. “Amoeba is the kind of place where musicians of the highest level can get together and talk music and nerd out.

“You can get everything from streaming these days … but you go to a record store, that’s where the real fans are,” Spencer continued. “They’ve survived streaming, they’ve survived COVID … Amoeba is going to live forever. Even if it’s a brand new building, the funk is going to follow.”

Amoeba Music was founded in 1990 and opened on Telegraph Ave. in Berkeley in 1990. Its San Francisco store opened in 1997 in the Haight-Ashbury district. Its co-owners are Henderson, co-founders Marc Weinstein and Dave Prinz, and Karen Pearson. Amoeba is affiliated with a medical marijuana dispensary near the Berkeley store. Henderson said Amoeba has no immediate plans to open a dispensary in Hollywood.

Amoeba Music maintains its quirky stature online with a YouTube channel that features the show “What’s In My Bag?” with artists and experts sharing information on their latest purchases at Amoeba. For a peek at the series, visit the link below.