Total escapism will have to wait, though, as we get used to watching movies with sparse, socially distant crowds and abundant rules.

Out in the audience, we sit stock still, at appropriately safe distances. There are 25 of us, tops. One attendee lowers her face covering a few inches, as if to catch a whiff of tanning lotion and Michel Legrand’s sultry music. Viewers around her tense up. An usher is summoned, discreetly asking for compliance. She raises her mask, but the employee lingers for a moment, making sure it sticks. (This is much better than what happened at a midday screening of Federico Fellini’s “La Strada,” when a flare-up over smuggled-in snacks threatened to plunge the anticipatory mood into fury.) 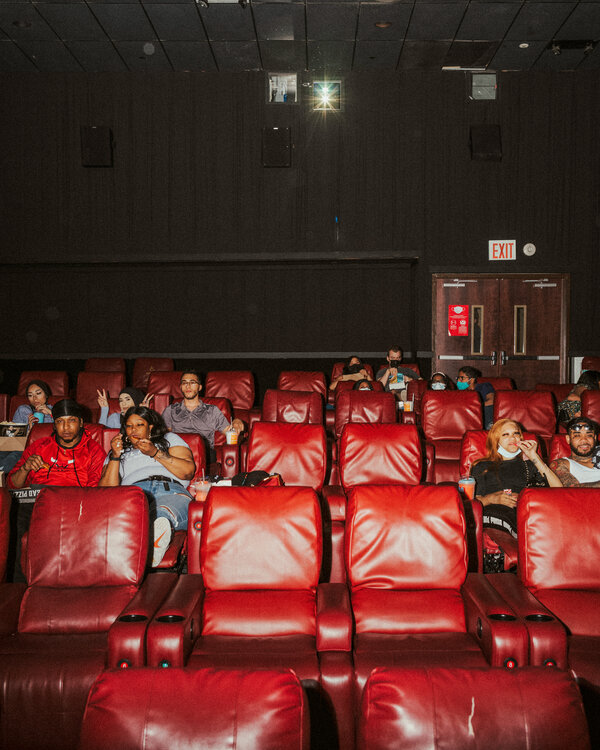 As ever, the movies are showing us a reality that’s out of reach. That gap feels especially wide right now, as New York’s art houses and multiplexes reopen, shakily, and the C.D.C. relaxes safety guidelines, a development that has only added to the friction. The experience of being back isn’t quite what it used to be, at least not yet. Bathrooms are spotless to a spooky degree. The slick smell of popcorn butter — the oddly comforting aroma of Hollywood itself — hasn’t returned so far. Concessions are unavailable in many theaters. Deserted lobbies and empty escalators add to the overwhelming zombie-mall weirdness of it all.

What was I hoping to find? Can you feel phantom FOMO for something that isn’t even happening? Before the pandemic, I went to the movies for a living, never realizing how important the going was. During lockdown, the movies tracked me down (considerately) via streaming links when that was the only option. Sometimes it felt like pretending. For more than a year, I’ve been desperate to return the favor and have now embarked on a fact-finding mission across the city, like Martin Sheen heading upriver in “Apocalypse Now.” Hopefully you forget how that one ends.

Only the fully vaccinated should be witnessing this. That’s certainly not the case. After waiting the suggested two weeks from my second Moderna shot in late March (a sluggish day that felt like a system reboot), I rejoined the company of filmgoers. It felt vaguely like getting away with something you knew you shouldn’t be doing.

No apologies. The excitement of being back, however tinged by free-floating nervousness, can’t be downplayed. I drank in Andrei Tarkovsky’s elliptical 1975 art film “Mirror” like so many vodka flights, every mysterious windswept field and liquid interlude frizzing my synapses. Amazingly, my tiny Elinor Bunin Munroe Film Center audience greeted the end credits with a robust chorus of woos (possibly a first for Tarkovsky). Maybe we were cheering the mere idea of surviving a film together. A theater worker dismissed us row by row; we obeyed like good little schoolchildren.

There’s something performative about returning to the movies right now. The laughing is louder. Perhaps it’s compensation for all the taped-off rows, all the dead space. We’ve become the film ourselves, telegraphing our emotions in ways that only 14 months of mouth-obscured masking can spur. Case in point: Orson Welles’s chatty 1973 documentary “F for Fake” is amusing in a purring, intellectual way, but it’s not the riot that a few superfans at the Paris Theater in Midtown were clearly having.