Mia Hansen-Love directs Léa Seydoux in a delicate look at a mother, daughter and lover whose quotidian existence is instantly recognizable yet sublime. 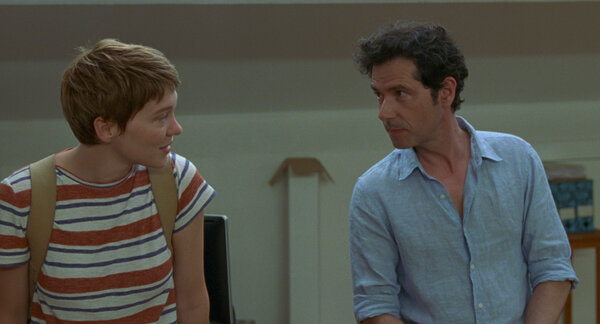 Sandra, the French single mother at the center of “One Fine Morning,” is always in motion, striding here and there, racing up and down, circling back and forth, and always with an intensity of purpose. With her head held high and her clear, unwavering gaze, a dowdy backpack strapped to her back, she doesn’t resemble one of pop culture’s fantasy gamines. She looks like the woman she is: a mother, daughter, friend, lover and worker who, in order to keep going, needs to maintain a steady course even when buffeted by strong winds.

Sandra is an appealing, sympathetic character, a rich mix of complexity and familiarity that the director Mia Hansen-Love — and her star, the great Léa Seydoux — subtly reveal in fragments. Much happens in the story, often quietly. Yet while the movie occasionally surprises, what distinguishes it, giving it unexpected force, are less the kind of life-altering events that are generally regarded as milestones. Instead what matters here is the delicacy with which Hansen-Love puts those events into play with modest moments, how she reveals the sublime in the in-between spaces of ordinary existence.

A widow, Sandra lives in a bright, modestly cramped Paris apartment with her cheerful young daughter, Linn (Camille Leban Martins). Much of Sandra’s time — her many comings and goings — involves her family, though mostly her father, Georg (an affecting Pascal Greggory). A philosopher, Georg has been diagnosed with Benson’s syndrome, a degenerative ailment that’s robbing him of his memory and sight. The movie opens with Sandra visiting her father, whose condition is so dire that she needs to guide him on how to let her inside. “Where is the …” he says, his voice trailing off. “The key?” she asks. “In the lock,” she continues from one side of a shut door that now feels like a wrenching divide.

The story is simple and its telling generally restrained even as Sandra’s life begins to take a turn for the progressively more complicated. There are arguments and spilled tears, but Hansen-Love’s touch here is insistently discreet and light, which remains true even as the narrative begins to unobtrusively divide into separate tracks. One involves Sandra’s anguished relationship with Georg, while the other centers on a love affair that she begins with an old friend, Clément (Melvil Poupaud). Each relationship pushes and pulls at Sandra, who’s saying a slow goodbye to one love even as she’s finding a new one.

Like Hansen-Love’s direction, Seydoux’s performance has a calm, understated quality that helps gives the movie a natural, comfortable flow. Sandra, who works as a translator, is almost always moving somewhere or toward something — her father, her daughter, her job — and because Hansen-Love likes medium and long shots, your attention tends to be concentrated on Sandra, her body and movements. You see her, but you specifically see her in the world, at her home, on the job, though mostly amid her family, friends and colleagues. You see, in other words, all the many pieces that make up a life.

One of the pleasures of “One Fine Morning” is how it sneaks up on you emotionally. The scenes between Sandra and her father are expectedly poignant, true. Yet what makes them resonate is how Sandra resolutely maintains her focus and composure even in the face of mounting catastrophe, how she tries to help Georg navigate his rapidly fading world. She patiently helps him recover his lost words, holding it together even as his condition worsens and the family decides to move him into a nursing home. Despite some low-key family tension, most generated by her carelessly self-involved mother (an amusing Nicole Garcia), Sandra seems so unflappable that you sense (worry) that a part of her has shut down.

The movie builds incrementally through scenes of varying dramatic and emotional intensity, some of which might seem like atmospheric filler (or just filler) in a different movie but here deepen the story. Again and again, Hansen-Love returns to the subject of memory, to the past and the ebb and flow of time. In one sequence, Sandra serves as a translator for an audience of American World War II veterans, mirror images of her father and grandmother, whom she later visits. When Sandra asks how she is, carefully taking a fragile, translucent arm, the older woman haltingly replies, “It’s a bit difficult at times … living.”

In her pursuit of uninflected naturalism, Hansen-Love has sometimes been a more interesting than wholly successful filmmaker (her second feature, “The Father of My Children,” is lovely), but “One Fine Morning” is beautifully balanced, persuasive and moving. Much of what occurs is familiar, including Sandra’s affair, which Hansen-Love makes specific and different simply by where she lays the stress and how. The story’s ellipses and graceful structure are certainly admirable, but what elevates “One Fine Morning” is the texture of Sandra’s emotions, the revelation of her character, the hunger of her embrace, the wildness of her mouth, the stillness of her sated body, and the love that she gives and will movingly embrace once more.

One Fine Morning
Rated R for some partial female nudity. In French, English and German, with subtitles. Running time: 1 hour 52 minutes. In theaters.