Trapped in a cryogenic chamber with oxygen levels dwindling, a woman must learn how to team up with the machine in order to escape. 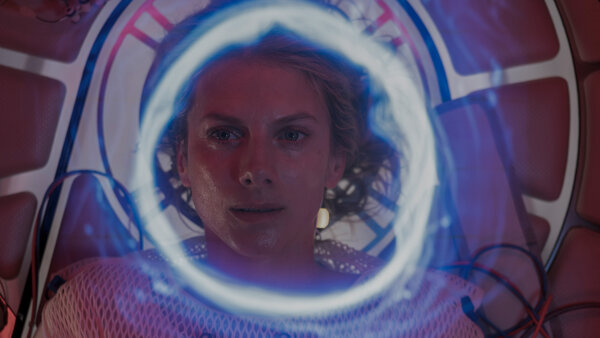 Since shocking his way into popular culture with the 2003 lesbian exploitation slasher “High Tension,” the horror director Alexandre Aja has led grand, English-language productions: remakes of “The Hills Have Eyes” and “Maniac,” as well as the bombastic horror-comedy “Piranha 3D.”

“Oxygen,” filmed during summer 2020 at the height of the coronavirus pandemic and now streaming on Netflix, is Aja’s return to French-language cinema. It also shows how much better the director can do with a sparse script (written by Christie LeBlanc).

The film takes place almost entirely within a cryogenic chamber slightly larger than a coffin. The film follows a woman (Mélanie Laurent) after a malfunction jolts her out of hypersleep. Trapped and with oxygen levels dwindling, she must learn how to team up with the machine, controlled by a sinister-yet-pleasant A.I. named Milo (Mathieu Amalric), in order to escape.

The premise is simple, but this twist-filled script by LeBlanc gives Laurent ample opportunity to shine. Because of its limited setting, the film hangs on Laurent’s acting ability, and she gamely vaults between elation, terror and determination. Aja maintains tension throughout, using horror conventions — and a few cheap jump scares — to routinely shock the audience back to attention. Though “Oxygen” is more thriller than horror, these manipulations keep the film taut, even as its script bends credulity.

The film’s opening is immediately gripping, sending viewers into a claustrophobic nightmare. When the protagonist is jarred awake, she must fight her way through a protective sac. Introduced by the sound of a beating heart and images of deformed lab rats, the first shots of Laurent’s face promise something monstrous underneath. Her features are elongated by red lights and her shallow breaths sound more animal than human. When Laurent’s face becomes visible, her fingers break through the cocoon like the chestbursters of “Alien.” The effect is uncanny, disorienting viewers and immediately aligning them with the film’s addled lead.

“Oxygen” is a film defined by its lack of space, and its art and animation departments have expertly constructed a cryochamber that is both visually pleasing and appropriately creepy. The A.I. Milo is rendered as a Siri-like circle of pulsating waves, occasionally offering up other interfaces for Laurent to navigate. As Milo’s voice, Almaric matches the cool, detached energy of his surroundings, while simultaneously winning trust as his captor’s only ally. The two even share a few wry exchanges, lending humor to an otherwise dour narrative.

“Oxygen” is the rare genre film that is tight enough to actually succeed on streaming. It will make you put your phone on the other side of the living room for a little while longer — or at least make you grateful you have a whole room to cross.