The first “Wonder Woman” movie, directed by Patty Jenkins, was a cinematic game-changer that proved female superheroes were every bit as mighty as men. The new sequel, “Wonder Woman 1984” (due Dec. 25), promises to be a very different kind of game-changer: Once positioned for a billion-dollar box-office gross, it will now debut on the same day both in theaters and on the streaming service HBO Max, a corporate priority for Warner Bros. and its parent company AT&T.

“It would have been a news story about women making so much money in the box office this year,” said Jenkins, who watched release plans for would-be blockbusters like her film and Niki Caro’s “Mulan” (for Disney) shift after the pandemic forced many theaters to close. “However, the more important thing is the movie finding its right audience, who is hungry for that experience.”

Tentpole-starved fans will find much to dig into with “Wonder Woman 1984,” which takes place decades after the first “Wonder Woman.” It’s now the 1980s, and Gal Gadot’s superheroine must tangle with Maxwell Lord (Pedro Pascal), a grasping tycoon who encourages the world’s avarice, and Barbara Minerva (Kristen Wiig), a nerdy nobody who eventually becomes Cheetah, Wonder Woman’s comic-book rival. 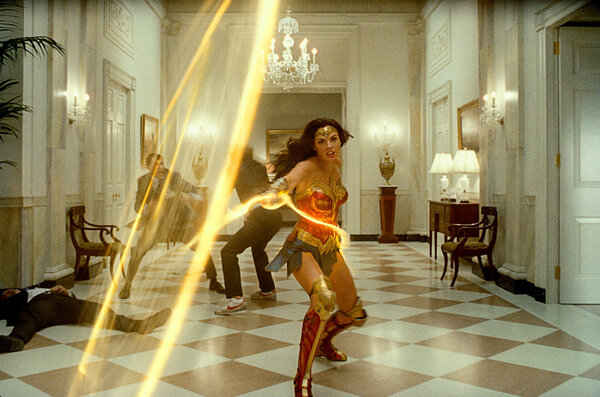 Though “Wonder Woman 1984” will be the first of Warner Bros.’ big blockbusters to bow on HBO Max, it won’t be the last: The studio recently angered its filmmakers and production partners by offloading its entire 2021 slate to the nascent streaming service. (Some titles will come out day and date with theaters.) While Jenkins has made her peace with “Wonder Woman 1984” debuting in homes, she told me in an interview on Thursday that her future with the franchise will depend on whether the studio commits once more to a theatrical model.

These are edited excerpts from our conversation.

A sequel wasn’t guaranteed in your contract for the first film. When did you start negotiating for it, and was it a battle to get what you wanted?

As soon as “Wonder Woman” came out and it was successful, we started to talk about it, and then the contract negotiations were very rough and they took a long time. But if not me after making “Wonder Woman,” who should be getting equal pay? I wanted to get paid at least as much as people who have done less well with their first superhero movies.

It’s been reported that you made around $8 million or $9 million for this movie, which would be a record for a female filmmaker.

It feels great. It really does. The weirdest part about it is that you can’t even quite wrap your head around the money, as somebody who’s never made huge amounts of money before. Really, I was so distracted with why it had to be that way that I wasn’t even able to absorb it.

What made you decide to set this film in the 1980s?

I wanted to do a full-blown “Wonder Woman" movie, but what I really wanted to talk about was what I was feeling is happening in the world. Not to get too heavy about it — I don’t want people to even know it’s about climate change — but we’re about to lose this world. What are we, when we’re at our most excessive, when we can’t stop wanting more? We all have a hard time changing our lives, but if we don’t, we’re going to lose everything. So what better time than the ’80s, before we knew any of the costs of these things?

It’s interesting, then, to see Pedro Pascal playing this blond-businessman adversary who at first resembles Donald Trump. But he’s given a much more sympathetic back story than you might expect.

I love the bigness of those ’80s villains, so I was into it. But also in this case, we wanted to really do something slightly different. You’re not just doing a campy ’80s businessman. You’re doing somebody who wants to be that, an immigrant who’s seen those guys in The Wall Street Journal, and so he’s frosting his hair and trying to look like he’s white.

I did a couple of things in this movie that everybody said we couldn’t do: Nobody dies, and she wins in the end with a conversation. To me, this was a Trojan horse: I wanted to tick off every box of what you’re looking for in a superhero movie, but actually what I’m hopefully pulling off is a subversion where instead you’re saying to this younger generation that sees these movies, “You have to find the hero within.”

It’s rare to see a superhero movie where triumph is based on more than just the ability to physically defeat someone.

And don’t we know better than that now in this world?

We could go bomb any country in the world, and it’s not going to stop the clock that’s coming at us in about 40 years. That’s exactly the point.

Have you had to fight for those moments of sincerity?

I don’t have to fight for it now, but I have had to fight for it in my career and I always will. There’s definitely an attachment to irony and pessimism in our world, which I get, but I don’t believe it’s very courageous. I think if you really have ever experienced tragedy or ever experienced love, they’re neither of those things. And so, since the beginning of my career, I made a promise to myself because I was with the cool kids who were at the inception of some of that stuff, and I was like, “I’m not going to do it. You may be embarrassed along the way to learn how to do emotion and sincerity, but I’m not going to stop doing it until I figure out how to.”

Was it easy to smuggle all of that into the first “Wonder Woman”?

There were plenty of people at the studio who didn’t quite understand or were not very confident in the film: “It’s too funny.” “Is she too soft?” But then on the night of the premiere, everything changed on a dime, and watching people freak out and react to the things I wanted them to react to was amazing. I’m so sad I’m not getting that this time. It’s such a bummer.

“Wonder Woman 1984” was originally supposed to come out in theaters at the end of 2019. Do you wish it had held that release date?

I never wanted it to come out in the winter. I was fighting the studio because we were supposed to come out summer of 2020, and then they didn’t have a big movie for 2019. I was in the middle of making a limited series, and all of a sudden they announced that they had moved up the release date by seven months, which was going to give me way less time to make the movie than I had for “Wonder Woman.” I was saying, “You guys, why would you guarantee I can’t make as good of a film by making it too quick?”

So we argued about that all year, and I had to drop out of doing a whole limited series and only do the first two episodes, and just race to write an 80-page treatment at the same time as I’m trying to direct the show. We finally got lucky that it got moved back. It would have been a much worse movie if it had come out then.

After the pandemic began to heat up and movie theaters started closing, “Wonder Woman 1984” slipped from its initial June 2020 release date to August, October and then Christmas Day. What was your experience on those decisions to keep delaying the film?

It was a fascinating thing, because it wasn’t like any of those calls were confident. It was a group of us sitting around going, “I don’t know, I guess we could say, ‘Three months from now,’ and then we’ll see what happens.” That was a trip, to be talking about a major movie like that with the heads of the studio and the heads of marketing, and everybody’s like, “I guess let’s just say October?”

When did you finally get the call about the release on HBO Max?

Two or three weeks before we announced it. It was weird, because the whole year I was afraid of that, and everybody at the studio kept saying, “No way, we’ll never do that,” because you have to make so much money with this thing. So when they suggested it, I was shocked. We did not agree right away — it was a very, very long process, and I don’t know that they would have let us disagree based on what they’ve been doing now. But I was conveniently into it for this movie.

Warner Bros. has said this is a one-year plan to send all its releases to HBO Max, but not everyone is convinced. Can the genie be put back in the bottle?

I would like to believe that it is temporary, but I’m not sure I do. But I’ll tell you, some studio’s going to go back to the traditional model and cause tremendous upheaval in the industry, because every great filmmaker is going to go work there. And the studios that make this radical change [of moving their theatrical releases to a streaming service], particularly without consulting the artists, will end up with a very empty slate of quality filmmakers working there.

You’re directing the “Star Wars” movie “Rogue Squadron” next. After that, do you still plan to direct a third “Wonder Woman” film?

We’ll see what happens. I really don’t know. I know that I’d love to do the third one if the circumstances were right and there was still a theatrical model possible. I don’t know that I would if there wasn’t.