The two Spanish actors discuss working together on a satire about the film industry, how they feel about awards and how they get into character.

That the international stars Penélope Cruz and Antonio Banderas had never spent more than two minutes together on the big screen is a surprising truth.

They had a brief cameo together in Pedro Almodóvar’s “I’m So Excited” (2013), and though they both feature in that director’s 2019 film “Pain and Glory,” their characters inhabited different time periods and thus shared no scenes.

That changed with “Official Competition,” now in theaters, a biting satire about the film industry and the creative process from the Argentine directors Gastón Duprat and Mariano Cohn.

Cruz, 48, plays the eccentric and curly-haired auteur Lola Cuevas, while Banderas, 61, is Félix Rivero, a vacuous and self-centered actor cast opposite the seemingly modest but committed Iván Torres (Oscar Martínez). As the trio rehearses for Cuevas’s upcoming movie, each of their unscrupulous and egotistic motivations rises to the surface.

Together via video call from New York, where they attended the film’s U.S. premiere at the Tribeca Festival, the Spanish actors discussed their against-type roles and their thoughts on awards. These are edited excerpts from the conversation. 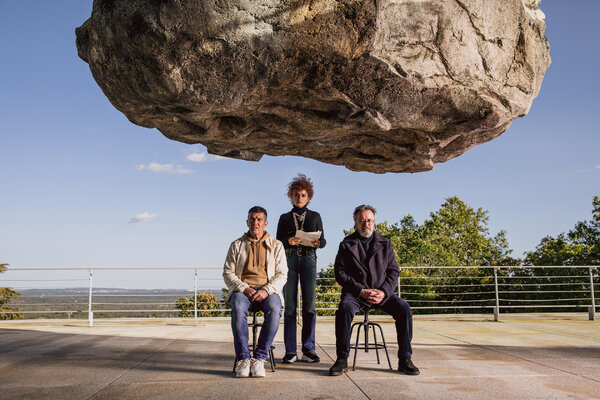 Had there been other projects you had planned to work on together before that didn’t happen because of scheduling or other mishaps?

PENÉLOPE CRUZ: No. That’s the weirdest thing. There had not been things that we were both offered and that one of us was able to do and the other one couldn’t. Pedro [Almodóvar] sometimes tells us his ideas of things that he would like to make with us. He teases us bringing up the possibility of making a remake of “Marriage Italian Style.” We would love to make that with him, but we never know if he’s just joking or if it’s a possible reality.

Antonio, between the fame-obsessed Félix and the condescending Iván, who would you prefer to be?

BANDERAS: Félix is arrogant and frivolous, but he’s also smart. If I had to pick being one of the two actors in the film, I’d still probably choose Félix. Iván is sly and pretends to have this purist ideology about art, but the second you are distracted, he could steal your wallet. He is a dangerous character. When Iván pretends to receive an award in front of the mirror, he represents how people, in the film industry but even more so in politics, can become the very thing they criticize.

Have you ever encountered anyone that resembles Lola and her tactics in your career?

BANDERAS: The arts, and in the film industry in particular, are a subjective world where there are a lot of impostors. It’s easy to hide behind the subjectivity of the field. For example, in the great schools of acting such as Stanislavski’s method or Stella Adler, the techniques that help actors perform come from decades of testing. But there are plenty of swindlers who try extraordinarily bizarre processes and tell you that the truth about acting is behind the teachings they are selling. And there are naïve individuals who buy it.

Penélope, who were you channeling or mimicking in your portrayal of the capricious Lola?

CRUZ: I can’t say their names, but I was inspired by a few people, although not all of them from the film industry and not all of them women. The directors and I had watched a lot of video interviews of these people to take notes of the outrageous things they would say [laughs]. I created a Frankenstein character based on them and what we all shared on the strangest things that have happened to us on set.

How useful was the eye-catching wig for your transformation?

CRUZ: The wig helped me a lot, because when Lola enters a room, she wants to be seen. She always believes that what she has to say is more interesting than what anybody else has to say. She is not good at listening to others and is very lonely because her ego devours her. She is insufferable, but it was so fun playing her.

In one scene, Lola tortures her actors by destroying their precious trophies. What do you feel about the importance of awards in relation to that scene?

CRUZ: I had a good time with that scene. But since some of them were our real awards, I didn’t want to go crazy and accidentally break them for real, because we’ve worked hard to get them. They have value, and one should be thankful for them.

BANDERAS: But if we think about it, the trophy is the materialization of something that has already been granted to you. Meaning that if you win an Oscar, you can put it in your country home or on the top of a tree or lose it, but the fact that you were given the Oscar will remain on record in the history of cinema. Our attachment to the materialization of a moment is extraordinary, and what Lola does is perhaps one of the most coherent scenes in the movie by saying, “Detach, man! This is symbolic. Even if I destroy this, you are already the winner of whatever it was.” It’s funny how much we love medals and shiny things.

CRUZ: I don’t think Lola analyzes that way, Antonio. She destroys her own awards but at the same time is capable of shooting the entire movie again only with Félix playing both characters. She knows exactly what happened to Iván. But she doesn’t ask questions because she doesn’t want to know the truth. The only thing she cares about is moving her film forward. She’ll continue caring about awards more than anything else in her life.

Do you keep your awards in a particularly special place?

CRUZ: No, just at home. But when I had just won the Oscar, I took it to the beach with me for a few days.

BANDERAS: So he could get a tan [laughs].