Richard Donner, the tough, single-minded but playful film director who made Christopher Reeve’s Superman fly, Mel Gibson’s deranged detective lethal and the young stars of “The Goonies” pirate-adorable, died on Monday. He was 91.

His production company and his wife and producing partner, Lauren Shuler Donner, confirmed the death with Hollywood trade publications. They did not say where he died or give the cause.

Mr. Donner was in his late 40s when he made his first blockbuster, “Superman,” reviving a comic-book hero who hadn’t been seen onscreen since the 1950s television series “Adventures of Superman.” The film opened in 1978, introducing Mr. Reeve, a relative unknown at the time, as the Man of Steel and some state-of-the-art special effects.

“If the audience didn’t believe he was flying, I didn’t have a movie,” Mr. Donner told Variety in 1997.

That megahit was followed by “Inside Moves” (1980), a drama about a man crippled in a failed suicide attempt (Janet Maslin wrote in The New York Times that Mr. Donner had directed it “with a surprising gentleness”); “The Toy” (1982), with Richard Pryor, whose character finds himself hired to be the plaything of a spoiled rich child; “The Goonies” (1987), about misfit children on a treasure hunt; the first of four “Lethal Weapon” movies (also 1987), starring Mr. Gibson and Danny Glover; and “Scrooged” (1988), an irreverent comic take on Charles Dickens’s “A Christmas Carol,” starring Bill Murray.

Mr. Donner attributed the surprise success of “Lethal Weapon” to his clean depiction of violence.

“I like to turn my head away in suspense, not in disgust,” he said in a 1987 interview with The Times. “Sure, there were a lot of deaths, but they died like they died in westerns. They were shot with bullets; they weren’t dismembered.”

He even admitted to having stolen some fight moves from a western: “Red River” (1948), which starred John Wayne.

Mr. Donner always said he had been hired for “Goonies” because Steven Spielberg, who produced the movie, had told him, “You’re a bigger kid than I am.” But working with actual kids (including Sean Astin at 14 and Josh Brolin, barely 17) was a mixed blessing.

“The annoying thing was the lack of discipline,” Mr. Donner told Yahoo Entertainment in 2015. “And that was also what was great, because it meant that they weren’t professionals. What came out of them was instinct.”

In a statement on Monday, Mr. Spielberg said: “Dick had such a powerful command of his movies, and was so gifted across so many genres. Being in his circle was akin to hanging out with your favorite coach, smartest professor, fiercest motivator, most endearing friend, staunchest ally, and — of course — the greatest Goonie of all. He was all kid. All heart. All the time.” 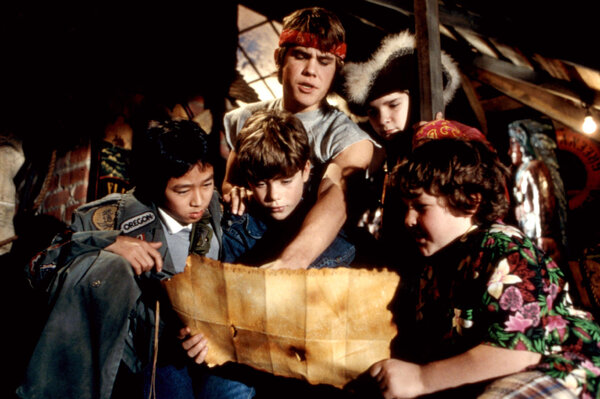 Richard became fascinated by film when he and his sister would go to their grandfather’s movie theater in Brooklyn. But he had no specific career ambitions, Mr. Donner said in a 2006 Archive of American Television video interview. He grew up in the Bronx and in Mount Vernon, N.Y., and joined the Navy in his teens.

His first real attraction to show business came with a summer job parking cars and doing errands at a summer theater. Because his father wanted him to study business, he enrolled in night school at New York University but dropped out after two years.

He had some luck landing acting jobs in commercials and finally won a tiny part on the 1950-51 anthology series “Somerset Maugham TV Theater.” The episode’s director, Martin Ritt (who went on to a successful career directing movies like “Hud,” “Sounder” and “Norma Rae”), didn’t care for the young man’s attitude and offered a suggestion. “You can’t take direction,” he said. “You should be a director.”

Mr. Donner (he took his stage name from the infamous Donner Pass massacre, observing its centennial at the time, and because Donner sounded like his middle name) continued to do commercials and helped found a commercial production company, which he and his partner later sold to Filmways. He got his big chance to direct prime-time series TV in 1960, with an episode of the western “Wanted: Dead or Alive,” starring Steve McQueen.

From the start he brushed elbows with stars. The golden-age-of-Hollywood star Claudette Colbert was in one of his first assignments, a 1960 episode of “Zane Grey Theater.” One of the six “Twilight Zone” episodes he directed was “Nightmare at 20,000 Feet,” in which William Shatner played a terrified airline passenger who sees a gremlin on the wing outside his window.

Neither of Mr. Donner’s first two tries at film made a big splash, but he directed big names: Charles Bronson in “X-15,” a 1961 drama about a test pilot, and Sammy Davis Jr. and Peter Lawford in “Salt and Pepper,” a 1968 comedy crime thriller.

The first Richard Donner movie that received headline attention was “The Omen” (1976), about a cold-eyed little boy who is secretly the Antichrist. Vincent Canby, unimpressed, described Mr. Donner in The Times as “a television director who has a superb way of dismissing any small detail that might give some semblance of conviction to the proceedings.” But “The Omen” became the year’s fifth-highest-grossing film; soon its director was offered “Superman,” which did even better financially. It was beaten at the box office in 1978 only by “Grease.”

Mr. Donner directed Mr. Gibson in two high-profile films in the 1990s: “Maverick” (1994), a comic western with Jodie Foster; and “Conspiracy Theory” (1997), an action thriller about a paranoid cabdriver, with Julia Roberts. In the early ’90s he produced and directed episodes of HBO’s “Tales From the Crypt.”

He met Ms. Shuler when she hired him for the 1985 fantasy “Ladyhawke”; they married in 1986. The couple eventually chose not to work together because it affected their relationship, Mr. Donner said. “I’m a 200-pound gorilla,” he explained. “She’s a 300-pound gorilla.”

But their production company, the Donners’ Company, founded in 1993, has been behind lucrative hits like “Deadpool,” “The Wolverine” and the “X-Men” franchise. (Complete information on his survivors was not immediately available.)

Like Alfred Hitchcock, Mr. Donner enjoyed making silent cameo appearances in his own projects; he was, among other things, a riverboat card dealer in “Maverick,” a police officer in “The Goonies” and a passer-by in “Superman.”

But asked in the Archive of American Television interview how he wanted to be remembered, he was unassuming. “As a good guy who lived a long life and had a good time and always had that lady behind him pushing him,” he said. His only boast: “I’m pretty good at meeting a schedule and a budget.”