In the third “Conjuring” movie, Ed and Lorraine Warren tirelessly work to convince a court of law — thus, the audience — that Satanism exists. 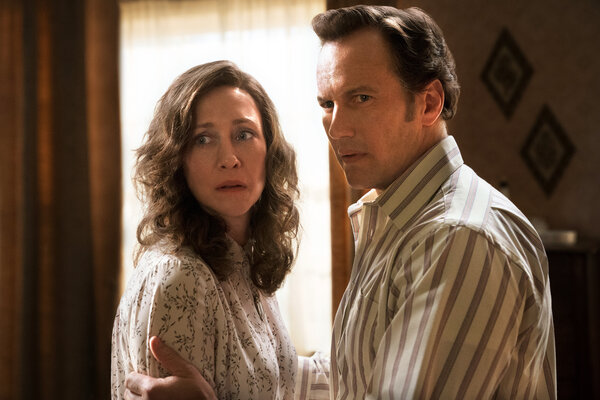 “The Conjuring” movies offer a fascinating peek into the American psyche. Based on the lives of the Northeastern paranormal investigators Ed and Lorraine Warren, the franchise demands viewers invest in a worldview ruled by Christian dogma, where Godly good must battle satanic evil. “The Conjuring: The Devil Made Me Do It” is by far the most well-constructed, terrifying entry in the franchise, but its plot relies all too heavily on that same bizarre evangelism.

“The Devil Made Me Do It,” helmed by the “Curse of La Llorona” director Michael Chaves, opens on a slickly stylized exorcism. Heavy fog introduces a series of imposing, angular shots as Ed (Patrick Wilson) and Lorraine (Vera Farmiga) work to free an 8-year-old boy from demonic possession. Top-notch sound mixing and a booming score keep this sequence taut, even exhilarating, as the demon slips from its child host to the unsuspecting Arne Johnson (Ruairi O’Connor). In an even more chilling series of scenes, a possessed Arne later stabs his landlord to death. It is then up to the Warrens to prove that Arne is not guilty by reason of satanic curse.

As with “The Conjuring” and “The Conjuring 2,” the film is based on the Warrens’ real-life escapades, and the couple did attempt with Johnson’s lawyer to mount a possession defense. But the film conveniently attributes Johnson’s first-degree manslaughter (rather than murder) conviction and meager five-year prison stay to the Warrens’ efforts, despite the court dismissing their claims for real. It also heavily implies that Lorraine Warren, armed with heavenly psychic powers, is a more skilled investigator than the police, and preaches marital devotion as the ultimate Godly weapon. (The latter is a staple of the franchise.)

“The Devil Made Me Do It” is an excellently spooky work of fiction. It would be even better if it privileged ghoulishness over gospel.

The Conjuring: The Devil Made Me Do It
Rated R for child contortions and a blood shower. Running time: 1 hour 52 minutes. In theaters and on HBO Max.