In this immersive portrait of ethnic conflict by the Rwandan filmmaker Joel Karekezi, two men also take on the jungle and the savage elements. 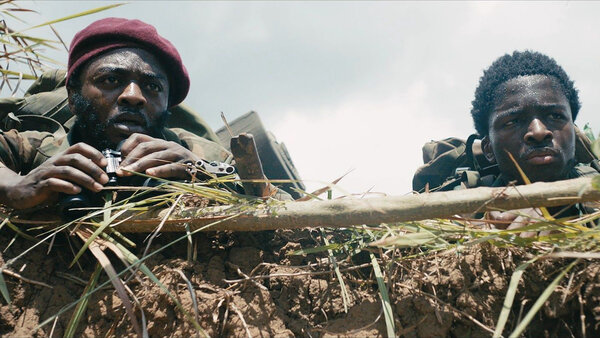 Set in Kivu, at the eastern edge of the Democratic Republic of Congo, “The Mercy of the Jungle” wrings existential dread from its immersive conceit, following a pair of Rwandan soldiers swept up in the haze of multinational and regional conflicts that broke out in the late 1990s.

Dispatched with the vengeful objective of hunting down ethnic Hutu rebels, the men brave the elements and reckon with their own complicity in the perpetuation of violence.

The filmmaker and co-writer Joel Karekezi, a survivor of the Rwandan genocide which was a contributing factor to the military upheaval depicted in the film, skirts the big-picture history lesson here, choosing instead subjective, boots-on-the-ground testimony.

Accidentally separated from their unit, Xavier (Marc Zinga), a hardened veteran, and Faustin (Stéphane Bak) a new recruit, plunge deep into the dangerous jungle to avoid the enemy on the main road. Journeying through the wilderness comes with the expected challenges, such as severely volatile weather conditions and feverish hallucinations. At the same time, the film’s palpably-rendered environment, with stiflingly dense foliage and vivid natural soundscapes, heightens the dizzying nature of the war without resorting to titillation or idealized images that might glorify pain and suffering.

The film also calls attention to the ways in which one person’s struggle to survive can have a devastating ripple effect. In one particularly poignant aside, a village mourns a soldier found dead after an encounter with the two men. Later they pose as Congolese soldiers themselves to benefit from local hospitality.

Contrary to expectations, this morally dubious turn of events is not employed for its thrilling potential. The ease with which Xavier and Faustin are integrated into this “foreign” community reveals the arbitrary nature of territorial boundaries and friend-or-foe distinctions — such is the meaninglessness of modern warfare.

The Mercy of the Jungle
Not rated. In French and Swahili, with subtitles. Running time: 1 hour 31 minutes. Watch on Film Movement Plus.