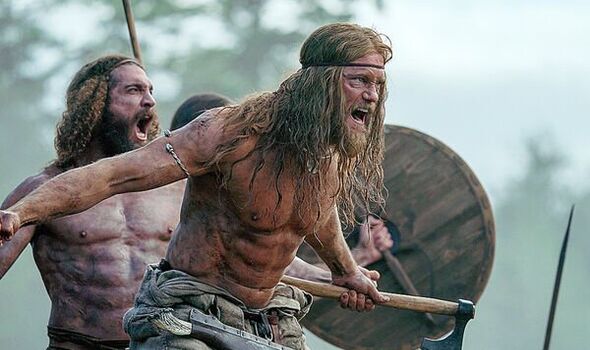 It’s based on the Scandinavian legend of Amleth, best known for inspiring Hamlet – the Bard’s superior rip-off. But Eggers pares the story down to its bare bones, recklessly ditching the embellishments that made the play so compelling.

Here, there’s no feigned madness, just a long, beautifully shot but dramatically inert revenge flick that perks up during the occasional weird bit.

The nuttiest sequence comes at the beginning, as boy prince Amleth (Oscar Novak) celebrates a sort of Viking bar mitzvah involving a jester in a gimp mask (Willem Dafoe), ceremonial farting and a pagan temple filled with hallucinogenic fumes.

The trippy visions are followed by the comedown as Amleth witnesses his dad King Aurvandil (Ethan Hawke) murdered on the temple steps by his uncle Fjolnir (Claes Bang).

After making his escape and secretly witnessing Fjolnir’s marriage to his mum Gudrun (Nicole Kidman), he makes a pledge: “I will avenge you, Father. I will save you, Mother. I will kill you, Fjolnir.”

That pretty much describes the rest of the plot as we jump forward to “years later” and find Amleth has grown into a young, muscle-bound Viking ‘berserker’ played by a way-too-old Alexander Skarsgard.

A thrillingly staged (but queasily topical) massacre of a Slavic village establishes Amleth’s action-hero credentials. But it also makes him a very difficult person to root for.

From here, the action moves to Iceland as Amleth tracks his recently usurped uncle and mother to a remote farm and poses as a slave.

As there’s no Shakespearean inner turmoil, it’s hard to work out why we have to wait so long for the inevitable showdown. More wacky diversions follow but the one-note characters fail to catch fire.