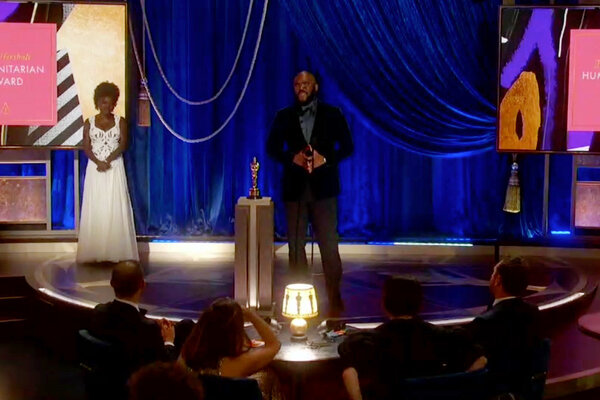 Beneath the surface, however, more is usually going on than meets the eye.

The academy sometimes uses them to right wrongs, as when Debbie Reynolds was awarded one in 2015. She was ostensibly recognized for founding a mental-health charity. But it was also a way for the academy to apologize for ignoring her pleas for help in preserving costumes from Hollywood’s golden age. She also never won a competitive Oscar despite appearing in films for seven decades.

Since the #OscarsSoWhite debacles of 2015 and 2016, honorary Oscars have gone to Spike Lee, Cicely Tyson, Jackie Chan, the Indigenous actor Wes Studi and other people of color. Geena Davis was recognized in 2019 for her continuing effort to correct gender inequality in Hollywood.

In selecting Tyler Perry to receive a special-achievement Oscar this year, the academy cited a “cultural influence extending far beyond his work as a filmmaker.” Some people saw the academy’s move as a corrective — a tacit apology for looking down its nose all those years at the lowbrow Madea and thus, Perry’s fan base.

No matter. Perry spoke movingly in his speech on Sunday night, saying, “When I set out to help someone, it is my intention to do just that. I’m not trying to do anything other than meet somebody at their humanity.”

“God bless you, and thank you, academy. I appreciate it, thank you.”

Perry started his entertainment career as a playwright. Since ending his popular “Madea” film series in 2019, Perry has focused on making television shows like “Bruh,” “Sistahs” and “The Oval” for BET. He owns a studio in Atlanta. He is also developing a “Madea” prequel for Showtime called “Mabel” that is set in the 1970s.