In “Get on the Bus,” Byrd plays a father who tells his son, “You are wanted.” The actor was killed Saturday, but his presence lives on for a moviegoer who can’t shake that scene. 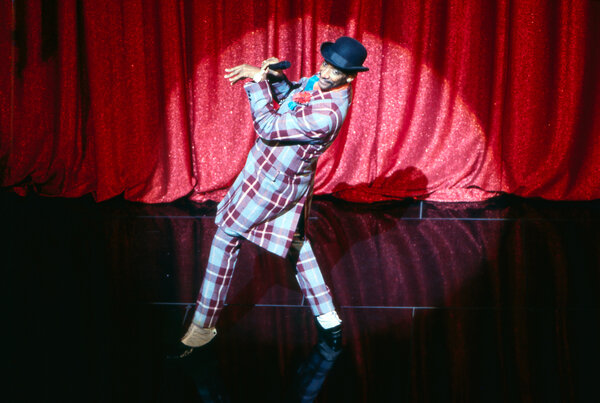 There is a scene in Spike Lee’s “Get on the Bus” that has always stuck with me.

The 1996 film (available on Netflix) is about a group of Black men who take a cross-country trip to the Million Man March. Among them are a biracial police officer and a former gangbanger turned Muslim. But the pair I always remember are Evan Sr. and Evan Jr. and their strained relationship.

Evan Sr. was not very involved in Junior’s life and Junior resents this. Trying to reconnect with his son, Evan Sr. thinks that the experience of traveling to and participating in the march will bring them closer together. There is a catch, however. Junior committed a petty crime, and father and son are literally chained together because the latter is on probation.

De’Aundre Bonds captures a young man who is angry with his father and also eager to capture his attention. But as the parent, it’s Thomas Jefferson Byrd who never left me. He embodies quiet strength touched with a bit of worry because he understands that while trying to be a good man now, he has failed his son by not being in his life.

Near the end of the film, after Evan Sr. has removed the shackles from his son, a fistfight breaks out between two men, who have been squabbling on the bus for days. In the confusion, Evan Jr. escapes. Senior finds him in the woods and a heartfelt conversation ensues. “I am your father,” Evan Sr. tells him. “And you are my son. I love you.” After a pause, he says the words that made the scene so unforgettable to me — even 24 years later. “And you are wanted.”

Maybe it was the fact that I was a son of a single mother whose father was not very involved in my life. Maybe it was the way the actor who spoke those words delivered them with breathless, earnest emotion. But I’ve not been able to shake it and still think about it to this day. How it devastated me at 15 and how it brought me to silent tears that I had to hide from my friends in the theater.

For a second time in my life Byrd has brought me to tears, but this time it was not his role in a film.

Byrd, the Tony-nominated, scene-stealing actor who was a frequent collaborator with Spike Lee, was shot and killed in Atlanta on Saturday. He was 70 and could be seen recently in, among other things, the Netflix adaptation of Lee’s “She’s Gotta Have It.”

A charismatic presence, Byrd was unforgettable every time he was on the screen. It did not matter if the film was great, like “He Got Game” or “Get on the Bus,” or subpar, like “Brooklyn’s Finest” or “Trois.” With Byrd, you got the same high-energy work. So memorable was his small role as Honeycutt, a blackface M.C., in Spike Lee’s underappreciated satire “Bamboozled” (2000) that my friends and I spent the year after high school telling each other, and trying our best to embody, a truth Honeycutt delivered that resonated deeply with us. In more graphic terms, he made it clear that being Black, even if you’re from the hood, is a beautiful thing.

There are certain performers, often character actors or actresses, that I keep an eye out for. If they’re in a film, I’ll check it out just because they’re in it. Louis Gossett Jr. is one. Regina Hall is another. After seeing him in “Get on the Bus” in 1996, Thomas Jefferson Byrd was at the top of that list.

His work was as memorable as his talent was undeniable. He will be missed.