CANNES, France — The Quebecois director Xavier Dolan has had more movies play at the Cannes Film Festival than most auteurs will ever get to make. His first, “I Killed My Mother,” debuted on the Croisette when Dolan was just 20, and he has directed seven more since, nearly all of which have received a Cannes berth.

Sometimes, the Cannes premiere has been as wonderful as a filmmaker could hope for, like when Dolan’s 2014 film, “Mommy,” won best-of-career raves and tied for a jury prize with Jean-Luc Godard. Other times, the experience is more complicated: Dolan earned the Grand Prix three years ago for “It’s Only the End of the World,” but the film was dogged by such scathing reviews that Dolan claimed the whole endeavor left him a physical wreck.

Now 30, Dolan has returned to the festival with “Matthias and Maxime,” which tells the intimate story of two friends (played by Dolan and Gabriel D’Almeida Freitas) who are asked to kiss on camera for a short film, though the smooch stirs feelings that they’re not sure how to deal with. “It’s love, and they wonder if it’s gay,” Dolan told me Friday at a beach club on the Côte d’Azur. “I’ve lived with the ambiguity of men my entire life — men who wanted to sleep with me and told me, ‘No, I’m not gay.’”

“Matthias and Maxime” mostly eschews the sweeping pop maximalism of Dolan’s last film, “The Death and Life of John F. Donovan,” which starred big names like Natalie Portman and Kit Harington but has had trouble securing American distribution since its Toronto International Film Festival premiere last fall. How will “Matthias and Maxime” fare beyond the festival circuit? A candid Dolan told me he hoped for the best. Here are edited excerpts from our conversation.

How does this Cannes experience differ from the others?

It’s just very discombobulating. I don’t even know where I stand. It’s very hard to build confidence and try to believe in yourself and come here. I don’t even know if we belong to this competition. I feel like I came here underdressed, when it comes to the film.

I don’t know about underdressed, but “Matthias and Maxime” definitely feels more unadorned and stripped-down than your previous films.

That’s what we wanted to do, but it’s tricky. I spent my entire 20s feeling like I was too much, and I’ve tried to strip down a layer of color and texture and intensity. And I feel like now, it’s not enough.

I have a feeling that something’s missing. I’ve been coming here 10 years, and it’s really hard to evolve here as an artist. I want to grow, but then when you change, people tell you, “Why didn’t you make the same film?”

I’m disappointed in myself because I wanted to come here with my friends, and I made this film for them. I said, “If everything goes well, we’ll go to Cannes and I’ll show you this incredible atmosphere.”

How did you feel as you walked up the red carpet with them?

I realized in my stupid little heart when we were out there, I wasn’t as free as I wanted to be. In their company, I was sort of outside of my body. It went so fast and so quickly that I felt like I didn’t really live it.

Do you think you’ll get U.S. distribution for this?

I don’t think I will. No. You want to bet? One hundred thousand dollars.

I don’t have that kind of money!

I don’t have it either. 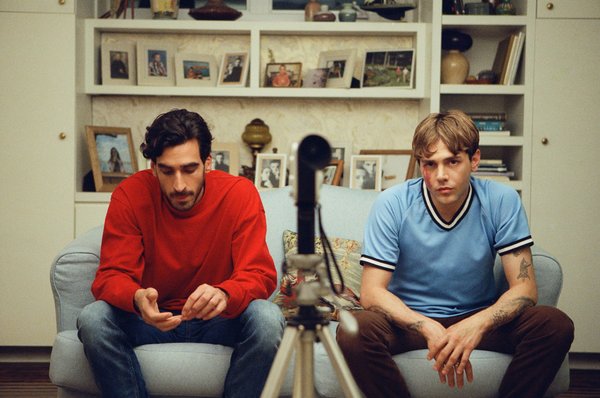 You’re obviously willing to wear your heart on your sleeve, but what I found fascinating about the mostly heterosexual group of friends that Matthias and Maxime are a part of is that every time someone gets a little vulnerable, they get made fun of. It’s good-natured ribbing, but it also feels like a reinforcement of masculinity.

The movie is about toxic notions of masculinity we’ve been given by society, but this group of friends, all of them feel very liberal, very accepting. In this group, homosexuality is clearly not a problem for anyone, and no one seems shocked by the existence of that kiss. The only characters that are troubled by it are the lead characters, because their notions of masculinity and how they see themselves are threatened by the kiss.

The two characters are at a place where they might be young, but they’re not young enough to be part of this new generation that feels so much more freedom and independence from labels. When I graduated from high school, a guy kissing a guy was “gay” and a guy kissing a girl was “straight.” Notions of sexuality and gender were not as evolved, and thank God they are now, but it doesn’t mean we don’t still have blockages in our mind that keep us from embracing these possibilities.

That’s what the characters in the film are dealing with: “Will I still be a man in the eyes of my male friends and my girlfriend and my mother if they only knew this kiss was haunting me?” And on an emotional level, can you discover new feelings for someone and take the risk of change when everything is established in your life quite orderly?

No matter how accepting society becomes, there will still be people wrestling with their sexuality because it could redefine the way people will think of you, or maybe even the way you think about yourself.

That’s my point. Are we straight or gay by nature? I know for a fact, and I think everyone does, that I’m entirely homosexual. [Laughs.] Even if I tried — and I did — I couldn’t have a heterosexual relationship or intercourse. That’s something that’s been extremely frustrating my entire life, because it would have brought a diversity to my life that probably would have made me feel much less lonely.

You dedicate “Matthias and Maxime” to the directors of four recent gay-themed movies, Eliza Hittman (“Beach Rats”), Luca Guadagnino (“Call Me by Your Name”), Joel Edgerton (“Boy Erased”) and Francis Lee (“God’s Own Country”). What kind of effect have they had on you?

Someone once asked me, “Why are your movies always about homosexuals? Couldn’t it be heterosexuals?” And a part of my mind didn’t forget that, even though I tried to. You know, the kid in “Mommy” was supposed to be gay. I decided that it wasn’t a narrative element that seemed meaningful, so we left it out, but I wonder: Did I do that because I feel shame for my sexuality? But when I read the script for “Boy Erased,” I was so impressed that Joel would adapt this story as a heterosexual. That he would feel such a deep connection with the story moved me in a way that felt like a departure from something.

And then I saw “Beach Rats” and the other movies, and it felt like I had lied to myself about what I wanted to make. In “It’s Only the End of the World,” there’s a [gay] sex scene, but it’s not too daring or physical — God forbid we see someone’s ass.

I realized I felt shame about how honest I could be. Of course it’s not a problem for me to film heterosexual love, but I’m here as a human being, making films that are very close to me, and there’s no reason for me to feel coy about my sexuality. Making “Matthias and Maxime” was a way for me to tell a love story about two men, which I realized I had never really done.

The gay movies that you were inspired by also have really dedicated teenage-girl fanbases.

I feel aroused by a lot of heterosexual romance I’ve seen, and in the same way, I would hope this movie would feel arousing and sensual to everyone. You can guess that the greatest thing for me would be for a young heterosexual man to come to me and say, “I loved the kiss scene.” And they have! That’s always vastly satisfying, because you feel like you go beyond the limits people forced on themselves sexually.

In the end, cinematic desire doesn’t belong to any given sexuality. I actually … well, I can’t even tell you this.

You can’t start a sentence like that and not tell me, Xavier.

There’s a woman who told me she was so deeply aroused by the kissing scene during the festival that she went home and masturbated. I was just like, “Yes, girl! Thank you.”