Brian May very rarely loses his cool, let alone his temper. So video footage of him furiously shouting and then making threats are quite a shock. The incident happened outside Brisbane airport after the Queen legend landed in Australia. Spotting young fans by the road outside, he stopped his car to greet them and tale phots. When a news crew cameraman tried to film the touching moment and was asked not to repeatedly, May eventually snapped. The entire drama was filmed and then shown on national TV. May has opened up to fans about his distress.

May posted multiple times on Instagram about the upsetting encounter.

In his final message, he thanked Australian fans for their love and support and said he was in touch with the young fan pictured in the footage and in May’s own posts.

Still distressed about how a personal and sweet moment had been spoiled, he also asked the other fans who had been there to get in touch. 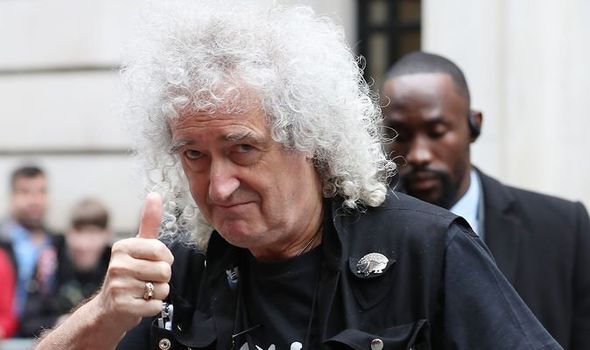 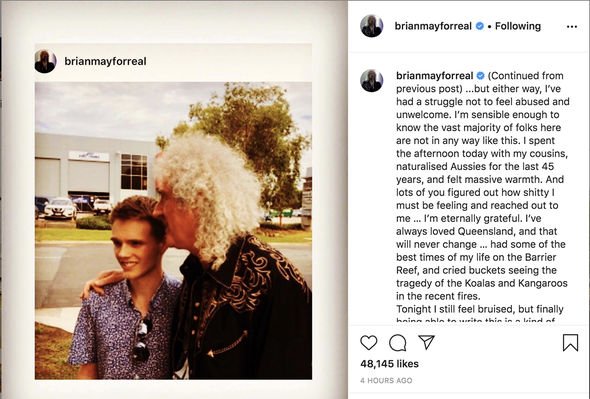 May wrote: “I’ve had a struggle not to feel abused and unwelcome. I’m sensible enough to know the vast majority of folks here are not in any way like this.

“I spent the afternoon today with my cousins, naturalised Aussies for the last 45 years, and felt massive warmth.

“And lots of you figured out how shitty I must be feeling and reached out to me … I’m eternally grateful. I’ve always loved Queensland, and that will never change …”

“(I’ve) had some of the best times of my life on the Barrier Reef, and cried buckets seeing the tragedy of the Koalas and Kangaroos in the recent fires.

“Tonight I still feel bruised, but finally being able to write this is a kind of therapy. I had to make my side of the story known.

“Being disrespected so publicly takes a little while to get over.”

Queen and Adam Lambert tour: Brian May was ‘BEYOND words’ after THIS

Brian May reveals Freddie Mercury would be ‘VERY happy’ with this

“But now it’s over. And tomorrow morning I will get up and do my preparations, with intent to give one of the best performances of my life, fuelled by new lessons learned, and a determination to make the best out of all this.

“And a determination to give our wonderful fans in Brisbane the best night of their lives!!! See ya there!”

Queen and Adam Lambert will play at the Brisbane Suncorp Stadium tomorrow before heading to Sydney’s ANZ Stadium on February 15. The following night at the same venue they will headline the Fire Fight benefit concert in aid of those affected by the recent bushfires.

Meanwhile, fans have rallied around and messages of support poured in over the last day.

One fan wrote: “Brian, please know how much you are loved and supported by your fans. We are always on your side because we know that you’re the kindest person in the world. We know you. And we love you. You will always have us to support you and defend you.”

Another said: “You’re handling this with strength and grace and we are all here for you and on your side! for sure the show will be better than ever.”

The Beatles: Can YOU guess which George Harrison song was a John Lennon favourite?

Taylor Swift Achieves Her Seventh No. 1 Album on Billboard 200 Chart with Folklore
Celebrities