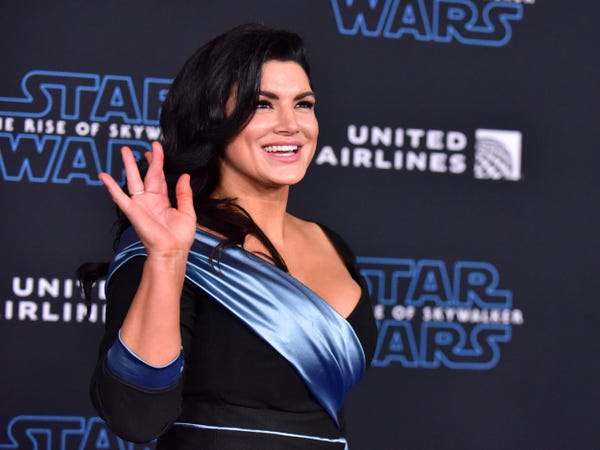 Actress and MMA champion Gina Carano is coming under fire for her controversial Twitter presence. The 38-year-old, who is best known for her role as Cara Dune in "The Mandalorian," has been called "transphobic" by her critics for a recent social media stunt that, some argue, mocked trans people and their allies.

Outrage surrounding Carano's social media presence escalated in August when Twitter users called the actress racist for sharing a photo from a Nazi rally in 1936.

Carano clarified that she shared the photo to draw attention to a "heartbreaking and powerful story of a man who changed his ways for the woman he loved," as the photo showed a former Nazi, who eventually married a Jewish woman, refusing to give the "sieg heil" salute. But some commenters felt that simply sharing an image also featuring hundreds of Nazis sent the wrong message.

"You literally could've picked a better picture to show whatever u wanted to show that didn't have fricken n*zi's on it," one Twitter user replied.

"Girl u got some explainin' to do," another wrote.

Carano ultimately denounced the users criticizing her choice to share the photo, calling them "trolls."

One commenter, however, suggested that the critics were simply trying to educate — to which Carano responded that her critics were misinformed "cowards and bullies" rather than "educators."

Some jumped to Carano's defense, calling her critics " SJW trolls" and screenshotting comments in which Twitter users called Carano a "bootlicker" and demanded that she tweet "ACAB" to prove her commitment to the Black Lives Matter movement.

On August 5, however, #GinaCaranoIsOverParty began trending on Twitter, as enraged Twitter users continued to suggest that Carano was racist and recalled that she had shared anti-mask memes amid the COVID-19 pandemic and retweeted content from alt-right figureheads like activist and conspiracy theorist Jack Posobiec.

Carano came under fire again in early September for urging churches and businesses to re-open amid the pandemic, arguing that the coronavirus does not "know the difference between a protest or praise & worship." A June research paper published by the National Bureau of Economic Research found that protests were not yet associated with significant increases in COVID-19 infections, according to Forbes. There have been hundrends of cases linked to religious facilities, though, as was documented in a July New York Times article.

Commenters suggested that her position appeared to be anti-protest and several pointed out that the Black Lives Matter protests, unlike worship services, took place outside and involved largely masked participants.

Others suggested that Carano use her platform to encourage safety measures.

"People are also literally dying because of COVID-19, so you should be promoting people to follow the safety protocols, wear actual masks, and practice social distancing to help this pass faster," one commenter wrote. "Then we can get back to normal like other countries. It's that simple."

Carano raised eyebrows again this week when she appeared to poke fun at the Twitter users who disclose their preferred pronouns on their profiles.

In lieu of adding "she/her/hers" next to her name — an increasingly common practice among the LGBTQ+ community and their allies — Carano wrote "beep/bop/boop" next to her name. The actress's critics immediately denounced the move, calling the sentiment"transphobic."

In a tweet on Saturday, Carano said she had spoken to her co-star, Pedro Pascal, to understand why social media users chose to share their preferred pronouns — and while she wouldn't be sharing her own, she respected other Twitter users' right to do so.

"I stand against bullying, especially the most vulnerable & freedom to choose," she wrote.

In response, Carano's critics demanded that she show her support for trans individuals by apologizing and sharing her accurate pronouns.

The actress resisted, describing the ongoing criticism of her online behavior as "months of harassing in every way."

"I decided to put 3 VERY controversial words in my bio.. beep/bop/boop," she tweeted. "I'm not against trans lives at all. They need to find less abusive representation."

Later that evening, Carano clarified that her decision to place "Beep/bop/boop" in her bio in lieu of pronouns had "zero to do with mocking trans people" – rather, she said, it was her attempt at "exposing the bullying mentality of the mob that has taken over the voices of many genuine causes."

"BOOP you for misunderstanding," she quipped.

The words no longer appear in her bio.

Critics are now calling on Disney to stand by its LGBTQ+ audience fire the "Mandalorian" actress for her statements.

Representatives for Gina Carano did not immediately respond to Insider's request for comment.