In 1992, when Trevor William Church was 10 years old, his dad took him to see Van Halen. It was a typical father-son outing, except for the fact that the band’s then-frontman, Sammy Hagar, happened to be Bill Church’s former boss. That night, the elder Church, who played bass on 10 Hagar solo albums during the Seventies and Eighties, broke down and wept.

“I said, ‘Dad, why are you crying?’ He’s like, ‘I’m just sad, son,’” Trevor recalls to Rolling Stone during a phone call from his home in Fresno, California. “‘This was what my life used to be like. I’m seeing all my old friends, all the guys that I traveled with for 15 years. It just makes me sad.’”

Unlike so many rock parents, Bill Church — who also worked with Montrose and Van Morrison, and went by the nickname “Electric Church” during his gigging heyday — put fatherhood first, ramping down his music career so he could be at home more. Now 37, Trevor finds himself equally committed to both pursuits. He’s a self-described homebody, with a son on the way, who’s also one of the world’s most prolific, not to mention skillful, heavy-metal auteurs.

Trevor took up guitar around age 11, encouraged by a cousin who taught him how to play and schooled him in classic heavy metal. But it wasn’t until his thirties that he hit his stride as a musician. After playing in a series of short-lived bands, all the while making his living as a hairstylist, he formed Beastmaker in 2014. From the start, the band stuck to a rigorously defined aesthetic — lumbering, post-Sabbath riffs; supernatural imagery — allowing Church to churn out material at an astonishing rate. To date, their discography encompasses two full-lengths — issued via respected London metal indie Rise Above, founded by former Napalm Death and Cathedral vocalist Lee Dorrian — and more than 10 self-released EPs, most identified simply with a number. 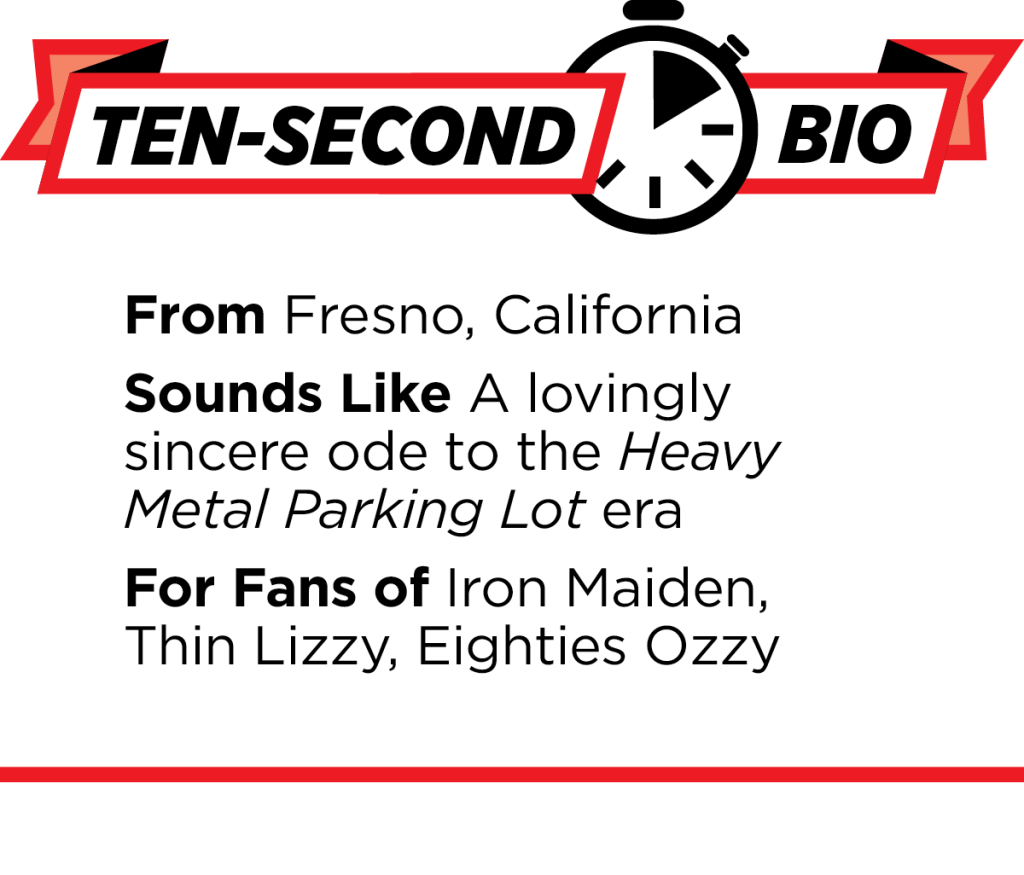 While that output has been remarkably consistent, it only hints at the scope of Church’s talents. If the first wave of Beastmaker EPs were like comic books, escapist, unabashedly campy and packed with samples from B horror flicks — song titles like “Demon Witch Child” and “Knights That Came From Hell” and cover images featuring zombies and skeletons give a good idea of what’s in store when you hit play — Burst Into Flame, the 2018 debut full-length from Church’s next project, Haunt, unfolded like a full-fledged novel. The musical palette was more diverse, ranging from pyrotechnic uptempo thrash to moody retro hard rock, the songwriting was sturdier, and the themes more mature.

To hear Church tell it, part of that shift had to do with taking cues from his many non-metal influences, including recent Rock and Roll Hall of Fame inductees the Zombies.

“The fantasy stuff, I love it, [but] I don’t relate to it,” Church says. “The Zombies? I relate to it. Love, loss, life, passion, death — those things bring me a lot closer to me than a sword and King Arthur.”

These sorts of timeless themes also play into Church’s latest album, If Icarus Could Fly, and companion EP, Mosaic Eyes, both released in March. Icarus opener “Run and Hide” is a call to transcend oppression (“Let’s take them down with force and break away these chains”) while Mosaic Vision’s gorgeously yearning title track is about rising up to embrace destiny (“Set a course to explore a world of my design”). In the hands of a lesser talent, topics like these could seem trite, a tired rehash of decades-old metal tropes. But Church’s expressive vocals — high and melodic but with a crucial hint of world-weary pathos — along with his fierce, inventive riffs (often harmonized in vintage Thin Lizzy and Iron Maiden style), ornate solos (some played by bandmate John Tucker) and concise, catchy songwriting align to make his retro ideas feel uncannily vital. Rounding out the presentation are his warm, unfussy production values, which run counter to contemporary metal’s often sanitized feel.

At a time when metal is cross-breeding with other genres and shooting off in all kinds of wild, progressive directions, Church is an anomaly: more old-school craftsman than willful innovator. His guitar heroes are fairly standard for a shredder of his age and taste profile: Eighties Ozzy Osbourne sidemen Randy Rhoads and Jake E. Lee, Dokken’s George Lynch, Metallica’s James Hetfield and Megadeth’s Dave Mustaine. But his songwriting inspirations stretch back a good deal further.

“My songwriting process is very formulaic,” he explains. “I’m just going to say that, because I’m not ashamed of it. That’s probably because of bands like the Mystics and the Beatles. Those two bands, I really like that it’s kind of straight to the point. You get a little intro, you get the verse, you get the chorus, you get a cool little bridge, you get your chorus ending. I’ve always thought that was a great way of expressing yourself.”

Church’s devotion to tried-and-true pop forms is one reason he’s able to generate so many songs. Another is that when he’s not on the road, he treats writing and recording like any other day job. When he calls Rolling Stone, it’s still early in Fresno, but he’s already settling into the studio he built in the converted garage behind his house.

“I don’t drink. I’m not a party guy,” Church says. “I’m just out here just working all the time.”

Laying out a typical morning for RS, he speaks with customary tripping-over-his-words enthusiasm. “My wife’s a schoolteacher. She is out the door in high heels and clanking shoes on the hardwood floor at 6:30 in the morning. So I rise up pretty early,” he says. “The first thing I do, get a cup of coffee. … I have Persian rugs covering the concrete [in the studio]; I have soundproofing everywhere, partitioned walls, tons of gear. I have so many guitars in here. Right now, just in my studio, I have [counts] one, two, three, four, five, six, seven, eight — eight guitars in here. I have a really nice producer workstation for myself. Having all those things around, that really gets me going.”

Traditionally, heavy metal was a collective endeavor where each band member played a specialized role — frontman, songwriter, lead shredder and so on — but Haunt is primarily Church’s vision. He writes the material and then brings in his bandmates — guitarist Tucker (also a member of Beastmaker), bassist Taylor Hollman and drummer Daniel “Wolfy” Wilson — once it’s time to record. 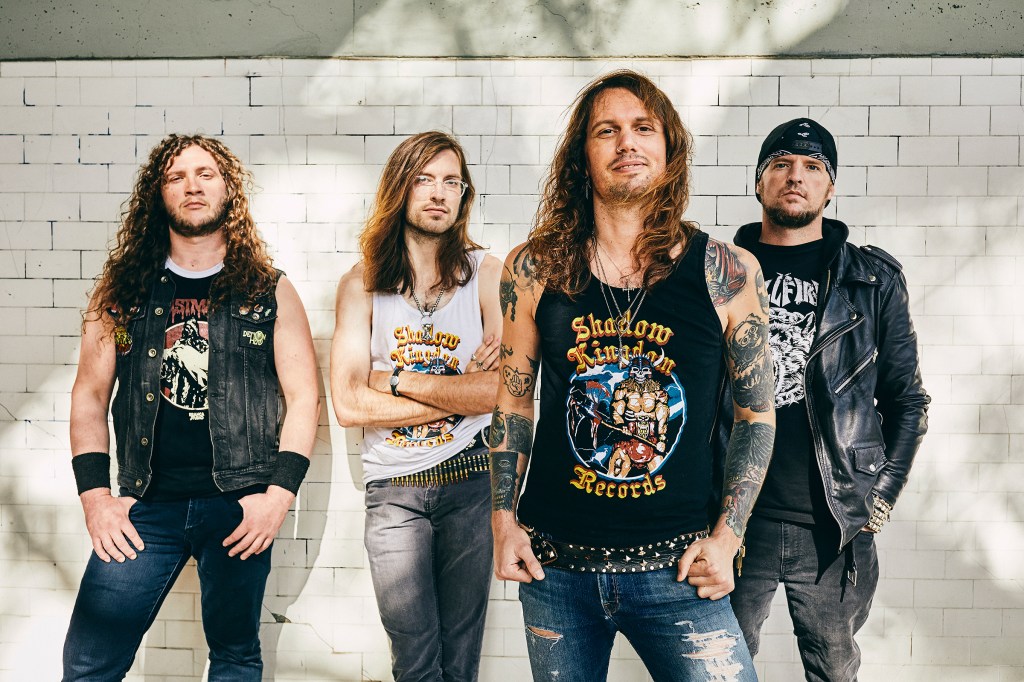 Church has been writing so much lately that he already has a whole new album’s worth of songs in the pipeline. This time around, Church plans to release them a song at a time, starting in the fall. As an artist who makes the majority of his living through online sales — “Bandcamp is like my life source,” he says — he’s tired of abiding by a traditional album-cycle model that only seems to slow him down.

“I started really digging through Spotify, streaming, all these sources of what people are listening to now, and only about the first four songs [on an album] get heavy rotation. The ends, they just get shitted on, man,” Church says. “I feel a lot of music is getting lost in translation, and I was like, why do I have to wait for all this stuff to happen? Press releases, marketing … I wanted to do something geared more toward what’s relevant [for] me as an artist. That would be for me to have this music out pretty much as soon as I’m done.”

The other tweak he’s made to his process lately is a more personal one. Church and his father have always had a close relationship, with Bill supporting Trevor’s interest in everything from guitar to skateboarding and sports, but in the past, the two had never seriously collaborated on music. With Haunt’s recent material, though, Bill has taken on the role of a trusted confidant.

“He didn’t really like Beastmaker. He didn’t really like the horror and the Satan stuff,” Trevor says of his father. “He was kind of like, ‘This shit’s too slow. It’s dark.’ When I started doing Haunt, he started really going, like, ‘All right, this is what you need to do.’”

Bill helped Trevor refine the material for Icarus, encouraging him to re-record all the vocals. And for Haunt’s batch of new songs, Bill is acting as co-producer.

“This is my favorite album I’ve ever done because of that,” Church says. “There is so much more depth to it, because not only are my lyrics all expressive of reality, but now there’s a family tie to it. I never thought that my dad and I would sit down and actually produce. He’s like, ‘This is what you need to go do here. Do that, and bring it back.’ It’s not like he’s here in the studio; I go over to his house. He has a really awesome backyard. It’s like, frickin’ lush — fruit trees and all this stuff that he’s been growing for years. He has a fire pit outside. We hang out up there, and we just kind of dissect the songs a little bit, figure out how to make them a little bit better.”

Church is about to be a father himself — his wife is due to give birth to their son in July. That fact and his recent collaboration with his dad has made him reflect on what Bill passed up in order to raise him properly. “My dad, he had opportunities to go with Ted Nugent, Night Ranger and all these bands,” Trevor says. “I think he was just, more or less, like, ‘I already did this. I’ve been doing music for my whole life. I’m going to be a dad,’ and that was the end of it.”

Now, Trevor says, he and Bill are making up for lost time — not as father and son, but as musical peers. “I wish he’d been doing that with me this whole time,” he says of workshopping songs with Bill, “but we do not have control of time. It just seems like now is the time for whatever it is that I’m trying to voice and express.”