For Lady Gaga, a crowd of 1,500 people may seem miniscule. She explained just as much during an emotional part of her set on Monday night at the Apollo Theater in Harlem, saying she hadn’t played a venue this small for over 10 years.

“I was playing for 30 people, then 500 people, then 1,500 people, then 10,000 people…” Gaga explained, her voice growing louder as the audience in the storied venue began applauding. By the time she got to the final stat — over 150,000 attendees for one show — the crowd at the Apollo was cheering in awe and appreciation of their Mother Monster, just as they had been for the past decade.

Granted, the 1,500 bodies all standing and milling about the Apollo on Monday — the theater has seating, but no one was sitting down for this intimate show — were an unusual mix. The event was, in large part, a celebration of the new business partnership between SiriusXM and Pandora Radio, and tickets weren’t open to the public. (In her obligatory sponsor shout-out during the show, Gaga had this to say about the corporate merger: “That’s hot. I wonder what kind of sex they’re gonna have.”) Music industry insiders and celebrities rubbed elbows with drag queens and a handful of superfans who had managed to score tickets through contests or connections. Adam Lambert was there, as was Amy Poehler. A whole deluge of record executives and platinum-blonde models hovered around the open bar before the show; everyone hugged and exchanged warm greetings as though they were at a private party, rather than a concert helmed by one of the world’s biggest entertainers. Among the more costumed attendees were Alaskan Thunderfuck, winner of Season 2 of RuPaul’s Drag Race All-Stars, and Courtney Conquers and Jamie Smith, two Toronto drag queens who run the blog and Instagram account Drag Coven. 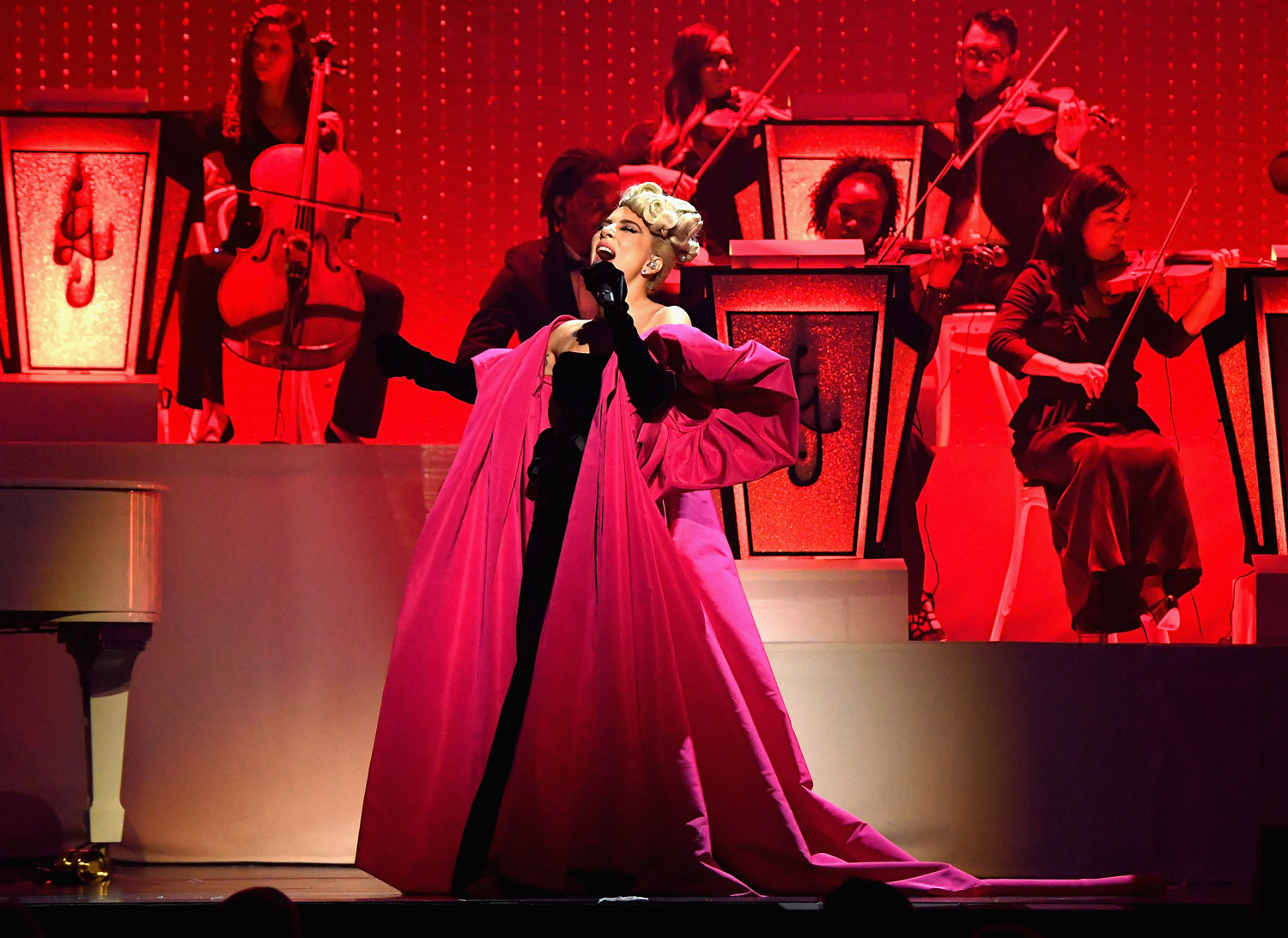 When Gaga finally arrived onstage, she devoted the first part of her two-hour set to elements of her Las Vegas residency show. She played her early hits — “Just Dance,” “Poker Face” and “LoveGame” — with a small troupe of lithe dancers and a five-piece rock band behind her, including keyboardist Brockett Parsons, who stood inside of a 360-degree “piano arc (of his own invention) that fit the sci-fi imagery of the show. Projected behind her at odd intervals was a 10-foot-tall alien named Enigma, created using Gaga’s voice and motion-capturing her movements. A very loose storyline followed Enigma bringing Gaga to her home planet, where the pop star learned to find herself and embrace what made her unique. “My enigma is my wisdom, my gut, my inner voice,” Gaga would explain later during the set.

What made the Apollo show different from her Vegas residency, of course, was the hometown spirit. Gaga took every opportunity to remind the audience that not only was she from New York, she hung around the Apollo’s neighborhood quite often during her youth, before she was famous. “I used to hang out in Harlem all the time,” she repeatedly intoned between songs. “All my friends lived up here.” During the set’s more awkward moments, she adopted what resembled a stereotypical “blaccent” to get the audience to put their hands up during a song or, in one extended sequence, use two of her dancers as stand-ins for her haters.

“You flippin’ me off? You live on the radio telling me to go fuck myself? You live on SiriusXM-Pandora telling me to go fuck myself?” she threatened one of them, before licking the middle finger he was holding up. “Well I’m here to tell you, in Harlem, where I used to hang out all the time, so I know, your makeup ain’t right!” As the crowd cheered, Gaga switched her voice again and added a cheeky aside: “Except, I designed a lot of what’s going on around here,” she said, putting a hand on the dancer’s face, “so honey, your makeup is all the way right!”

The show took a sudden shift towards a rock-arena feel when Gaga took a seat at her keyboard. The pop star has always made her piano performances just as much of an entertaining spectacle as her elaborate dance routines, and standing in the Apollo while she and her band performed “You & I,” it felt as though her ten-year career could have gone purely in the direction of Elton John if she had wanted it to. But that would ignore the era in which Gaga came up, especially for her vast swaths of LGBTQ fans; it’s important to remember that she was the gay pop star when drag queens truly became mainstream. The costumed pageantry will always be a part of who she is as an artist, even though sincerity and corny earnestness is just as much a staple of her work, particularly when she’s seated at a piano.

“It’s World Pride Week – if I had it my way, World Pride would be a 365 deal during the year,” she said before “Million Reasons,” to uproar from the crowd. She went on to acknowledge the 50th anniversary of Stonewall this Friday, and especially acknowledged the contributions of Marsha P. Johnson, a black trans woman, activist and key force at the Stonewall Riots who is often written out in whitewashed LGBTQ histories.

Gaga finished up the show with encore performances of “Bad Romance,” “Born This Way” and, for the inevitable encore, her Star Is Born hit “Shallow.” As she, her dancers and her band took their bows, she passed around a microphone so that all of her stage cohorts could say their names and introduce themselves to the crowd. Her onstage antics may not always make the most sense, or spark as much inclusivity as she’d want to believe, but even 10 years after thanking “God and the gays” in acceptance speeches, Gaga’s generosity remains at the core of her star image. The Apollo audience on Monday night wouldn’t have it any other way.