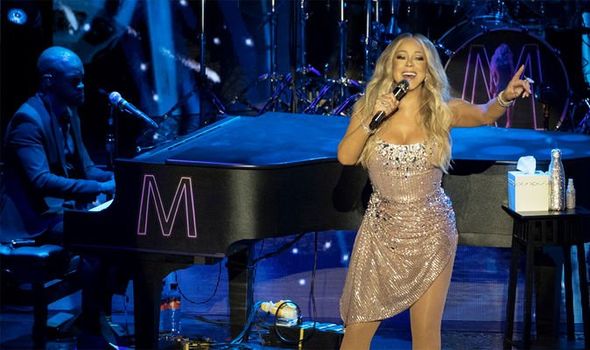 Music journalist and Mariah superfan Michael Turnbull flew over from Barcelona to review the show for Express Online: It isn’t always easy being a lamb. For the uninitiated, the lambily is Mariah Carey’s personal sobriquet for her devoted fanbase. Over the years, instead of watching what should have been a live extravaganza, we’ve been witness to one too many lip sync debacles. But last night, Mariah the vocalist and (lest we forget) songwriter made a show-stopping return. She demonstrated exactly why she is the living legend and blew the roof off the Royal Albert Hall with all the hits and a stunning reminder of that voice in all its glory.

Since signing up for a residency at Las Vegas’ Caesars Palace four years ago, it would seem the live experience has changed somewhat for the diva with a five-octave range.

When selecting a venue, she now prefers a more intimate affair, allow her to be up close & personal with her audience. The energy and confidence this gives her is evident. She was just as assured giving us sultry sass on recent hits ‘GTFO’ and ‘A No No’ as she was taking us to church with the gospel-influenced ‘Anytime You Need A Friend.’

The ecstatic crowd went even more crazy as she brought the night home with peak-90s Mariah, delivering a showstopping double-whammy of ‘Hero’ & ‘Without You’. She was hitting the high trills, the low growls, and all those iconic whistle notes were popping off all over the stage as we were joined by a diva who was ready to have some fun.


Indeed, it is a relief for fans to see that the Caution tour is all about fun.

From her relaxed vibe to the ensembles, to the onstage banter, Mariah was here to party, even lending an audience member her turquoise feather boa for one song before having a mock-fight with Bianca, her alter ego, during ‘Heartbreaker’.

The fun also extended to her setlist.

When launching this tour, Mariah told us she would be including some ‘throwbacks for the lambs.’ We were sceptical, having heard this before and then watching as she performed teh usual run of her 18 US Number 1s. It’s impossible to complain about hearing a legend deliver songs that are contemporary classics, but this tour allowed her to be more playful with her song choices, pulling both rarities & remixes from out of her Chopard diamond-encrusted ‘bag.’

There was even a whole medley dedicated to the one-time flop album Glitter, which just last year hit the Number 1 spot on US iTunes – a mere seventeen years after its initial release.

It would seem that playing a smaller venue like the Royal Albert Hall, truly allows Mariah to sparkle and feel at home, more so than on previous stadium tours.

Mariah up close and personal is an absolute delight, matched by those vocals as the most royal of venues brought this queen back to her throne.