As the most successful classical musician of his generation – with the legions of fans, barnstorming record sales and global celebrity to prove it – the three-decade career of Chinese pianist Lang Lang has given him plenty to smile about.

However, a balmy Sunday just a few weeks ago in early June stands out as the happiest day of the 37-year-old megastar’s life.

In the opulent Palace of Versailles on the outskirts of Paris, Lang Lang married fellow pianist Gina Alice Redlinger. The newlyweds even treated their guests to a piano duet during the reception. 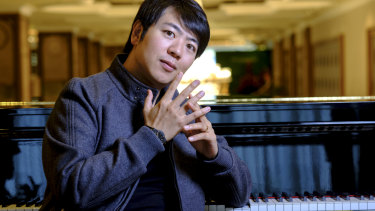 Lang Lang is in Melbourne to perform with Melbourne Symphony Orchestra.Credit:Luis Ascui

Lang Lang talks about his wedding day with the same beaming enthusiasm as he talks about music. This delightful disposition is seemingly the musician’s default mood; after all, his name translates to “sunny” (twice).

Professional pianists may not ever consider recording these pieces because they … are too simple. But these are great, masterful works.

That endearing charm has made him as much in demand as a cultural ambassador and commercial spokesperson as he is as a pianist. But it disguises some of the personal struggles that have, in a far more profound sense, powered his artistic passions.

His most recent album, Piano Book, is a case in point. Superficially, it's chock-full of crowd-pleasing favourites, from Debussy’s Clair de Lune, to Mozart’s variations on Twinkle, Twinkle Little Star, and even that ultimate party piece, Scott Joplin’s Maple Leaf Rag. It would be easy to dismiss such a collection of potboilers as lowbrow pandering; accusations that have long dogged the wildly popular artist. But both the substance and sentiment behind the album tell a different story.

“This is the music that inspired me to devote my life to the piano, when I was just a child,” Lang  Lang explains.

“Many professional pianists may not ever consider recording these pieces because they think they are too simple. But these are great, masterful works. Coming back to them after playing more difficult repertoire, you can rediscover a lot of things you never knew were there when you first played them.”

As revealed in his autobiography Journey of a Thousand Miles, Lang Lang first learnt these pieces under brutal pressure from a father determined to make his son the world’s No.1 pianist. Aged nine, after his piano tutor declared he had “no talent”, Lang’s father told him to kill himself – either with an overdose of sleeping pills that he provided his son, or by throwing himself off the balcony of their high-rise apartment.

Lang Lang refused, instead deliberately injuring his own hands. “I almost gave up,” he stoically recalls, “but this music called me back.”

You won’t find this story in the marketing bumph for Piano Book, but the childhood story at the core of the album seems to have been stirred by a more recent crisis. Lang Lang began devising the album during a forced hiatus in 2017, when severe inflammation in his left arm prevented him from playing. Far from defeating him, his health woes brought on a resilient sense of balance.

“It was actually a good thing to have time to reflect on my career and to focus on my personal life, to think about how I can have more space for myself, as a person,” he says. “I thought of it as a lesson that life showed me I needed to learn.”

Art makes everything in the world feel different. It makes you a more interesting and creative person … It makes you more powerful.

His choice of words is telling: education, of the most nurturing variety, is vitally important to him. In stark contrast to his own experiences, his Lang Lang Piano Academy beginners' course uses fun, cartoon-based lessons to teach students aged five to 10. In the next few years, the Lang Lang Foundation plans to invest more than $US5 million ($7.2 million) for school music programs in disadvantaged areas across the globe.

Unlike his father, Lang Lang says he isn’t interested in manufacturing superstars, just people with an abiding love of music.