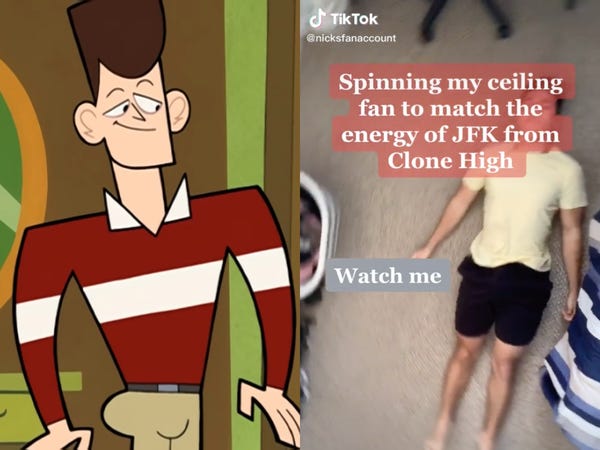 TikTok has its newest it boy: a cartoon depiction of a clone of President John F. Kennedy from early aughts adult animated series "Clone High."

Cartoon JFK is relatively unassuming. He has voluminous hair, goofy eyes, a long-sleeve red polo, and khakis. He speaks with an overexaggerated accent and relentlessly pursues women, who he frequently calls "broads." He is, as some would put it, "dummy thicc," and says things like, "My abs are so firm you can grate cheese on 'em!"

Now, "Clone High" — and JFK in particular — are blowing up on TikTok, drawing new audiences to the show.

"Clone High" was a 13-episode cartoon series created by Phil Lord, Christopher Miller, and Bill Lawrence that premiered on MTV back in 2002. In the series, clones of famous historical figures — think JFK, Abraham Lincoln, Gandhi, Joan of Arc, Cleopatra — are high school students going through the trials and tribulations of adolescence.

The show only ran for one season and was eventually canceled after, as The Guardian reported, nearly 150 Indian MPs and activists pledged to fast in protest of the Gandhi clone character on "Clone High," who differs significantly from his historical counterpart. In an interview tied to the show's 15th anniversary, producer Bill Lawrence told Entertainment Weekly that given the Gandhi character's obsessions with "dry-humping and getting loaded… it might have been in our best interests to have [that character] be someone other than Gandhi."

Even after the cancellation, the show, as Entertainment Weekly reported, survived online with a storied meme legacy. That legacy now continues on TikTok.

The JFK character is a TikTok audio gold mine

The most popular sound from "Clone High" is a snippet of JFK yelling, "Nothing bad ever happens to the Kennedys!" before screaming.

On TikTok, the sound has been remixed and repurposed. One of the early iterations of the audio appears to have been uploaded in mid-August by TikTok user @carterthedoge. At that point, the sound became associated with a trend based on expectations vs. reality, and how certain scenarios can lead to surprise or tragedy.

Other iterations of that sound popped up on the app, including one in which @robertbullin slapped a whole lot of reverb on JFK's scream, and another one uploaded by @postedinthedvrk in which the JFK audio cuts to Kendrick Lamar's "Humble."

Another popular JFK sound features a short jingle that he sings in the show's rock opera episode. "Watch me, hold me, sign my cast for me, wheeeeeeeel meeeeeeeee!" he sings.

has anyone else done this yet? if so, im sorry. it not, im still sorry##catsmusical ##jfk ##clonehigh

Among the growing use of JFK audios on TikTok, the character has become a meme in and of itself. Now, creators are starting to partially build brands around JFK cosplay, which only really requires khakis and a long-sleeve red polo to be recognizable.

Others also cosplay as characters from the series like Joan of Arc, reenacting dialogue and scenes from the show.

JFK's voice has also become a meme in and of itself, with people imitating JFK's voice over popular TikTok audios and memes.

ITS NOT EVEN GOOD I SOUND LIKE BERNIE SANDERS HELP ##clonehigh

It's a bit funny that "Clone High" – which aired in the early 2000s when some of the oldest members of Gen Z were toddlers or infants — is experiencing a massive surge on TikTok. However, the show's sense of wit and take on the high school experience make for perfect meme fodder on the platform. As TV critic Caroline Framke wrote in a 2014 "Clone High" review for the AV Club, "at the same time that 'Clone High' is a hyperbolic parody of teen shows, it can also be one of the most secretly accurate teen shows out there."

JFK's clone character is shameless, witty, hot, and seems to have approximately one brain cell. Many characterize him as a "himbo," or a conventionally attractive, muscle-bound man with a heart of gold. While the JFK character doesn't have the same "heart of gold" sense as classic himbos like Kronk of "The Emperor's New Groove," his loveable panache, ignorance, and his memorable character design help him fit the characterization.

Ultimately, it's easy to fall a little bit in love with JFK just from the memes, which frequently focus on his ridiculous one-liners and overdrawn accent.