Nine years since last performing in Australia, U2 will bring The Joshua Tree tour to stages around the country in November to celebrate their iconic 1987 album with fans.

The Irish band's fifth album topped charts around the world and to mark it's 30th anniversary the group played arena shows across North America, Europe and South America in 2017. Local fans can now see The Joshua Tree tour live on stage when it comes to Brisbane on November 12, Melbourne on November 15, Adelaide on November 19, Sydney on November 22 and Perth on November 27. Tickets will go on sale to the general public on Tuesday, June 11. 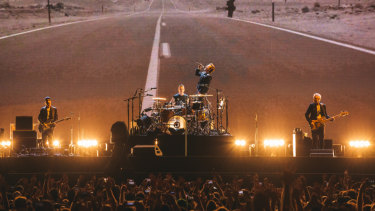 U2 will bring their acclaimed Joshua Tree tour to Australia in November.Credit:

Ahead of the Australian shows the band will perform in Auckland, New Zealand, on November 8. Two shows in Tokyo and one show in Seoul will follow the Australian shows in early December. U2 last performed in Australia in 2010 on the 360 Tour, playing a total of eight shows in Melbourne, Sydney, Brisbane and Perth.

"Our audience has given The Joshua Tree a whole new life on this tour," said U2 singer Bono, who in 1987 was featured on the cover of Time magazine as the band's popularity spread globally.  "Doing these shows has been very special for us, a lot of emotion … from the despair of how relevant some of the dark songs still are, to the joy, pure fun of the staging … it’s quite a ride."

The live show includes The Joshua Tree album played in full and in sequence, other songs from the band's extensive catalogue and the largest high-resolution cinematic screen ever used in a concert. Images and film by Dutch photographer Anton Corbijn, who provided artwork for the original album, also forms a key part of The Joshua Tree tour experience in 2019.

"We really wanted to bring The Joshua Tree to New Zealand, Australia and Asia," said guitarist The Edge. "We promised we would and finally, now we can say that we will see you in November." 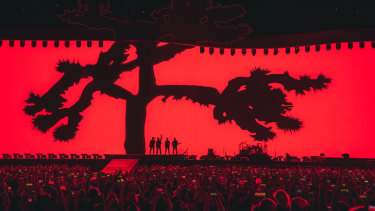 The Joshua Tree tour features the largest cinematic screen ever used for a concert.Credit:

The Joshua Tree won two Grammy awards and the album's hit singles Where The Streets Have No Name, I Still Haven't Found What I'm Looking For and With Or Without You propelled U2 from Ireland's best know rock band to international stars. They've gone on to win more than 20 Grammy awards in a career that's delivered 14 studio albums and some of the biggest tours in music history.

Produced by Brian Eno and Daniel Lanois, who also co-priced U2's previous album The Unforgettable Fire, The Joshua Tree has sold more than 25 million copies and was largely inspired by the band's extensive touring and their experiences in America.

A year before recording the album, U2 were part of the internationally televised Live Aid concert and on the cusp of making the transition from a hard working, highly regarded live band to recording stars and one of the biggest stadium rock bands of theirs, or any other generation.

In the year it was released, Rolling Stone magazine said The Joshua Tree was "a record that concerns itself with resilience in the face of utter social and political desolation" and that it was "music of great sadness but also of unutterable compassion, acceptance and calm."

The 30th anniversary tour began in Vancouver in May of 2107 and played to 2.7 million people across 51 shows, including the band's first ever show in Colombia.

The upcoming Australian shows, produced by Live Nation, will have paperless tickets for fans purchasing stadium floor tickets. Tickets will be delivered via mobile devices 72 hours prior to the show and there will be an eight ticket limit for general public sales.

A Live Nation pre-sale will begin on Thursday, June 6. For full tour and ticket information, go to U2.com