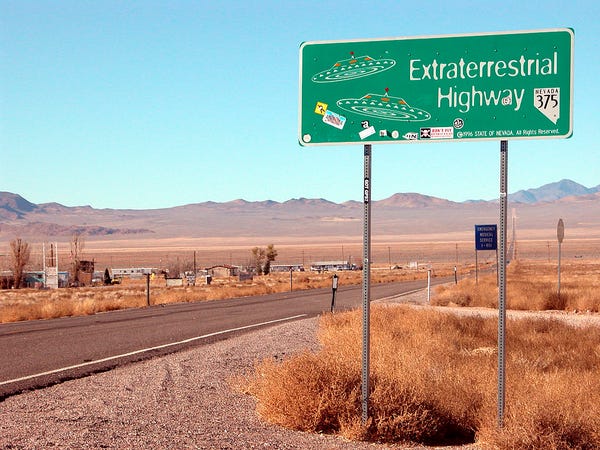 A viral TikTok video on Monday showed what many users believed to be an unidentified flying object (UFO) in New Jersey.

Rather than aliens, though, people were probably just seeing a Goodyear blimp flown to capture aerial footage of an NFL game at MetLife Stadium, according to the company.

The video may have come in peace, but it also came amid a major trend of UFO content on TikTok and other platforms, as The Daily Dot reported.

American interest in UFO sightings and signs of alien life has come in waves in the last century, beginning with sightings in the 1940s. At first, stories mostly spread through word of mouth or through the radio and newspapers.

The way these stories spread were considered to be "viral," said Greg Eghigian, a history professor at Penn State University and an expert on the history of UFO sightings. Even in the 1940s and 1950s, before social media changed the way we can disseminate information, the information would spread as fast as technology allowed.

But when people began taking photographs or video footage of what they thought were flying saucers in the sky, things really took off, Eghigian said. A video-sharing app like TikTok is particularly well-suited for UFO interest to spread because "images are gold" for UFO sightings, he said.

"Images speak volumes, and so when you can also combine these stories with arresting images, or arresting film images, you really have a formula for success in terms of having this stuff spread and spread quickly," Eghigian told Insider.

Purported-UFO-sighting videos are all over TikTok

TikTok's mysterious "For You" page algorithm highlighted several viral "UFO sighting" videos on Tuesday, according to The Daily Dot, with people in New Jersey, Boston, and other areas of the US filming what they thought were UFOs in the sky.

One Colorado user shared a video of a night sky with three bright lights and a blinking light centered, as he screamed excitedly, "what is that?!" Commenters were quick to note that it was most likely a light show that was part of Monday's Denver Broncos football game.

"Straight aliens in Boston no lie," read the text over another September 8 video that has 1.9 million views. The video, from a TikTok user with the handle @joeyobrien5, showed multicolored lights in the Boston sky which resembled coordinated drone shows that have gone viral in the past.

Another video with over one million views, posted on Tuesday, shows what a user with the handle @shanabran said might be a UFO in Boston. "Please be careful," he wrote in the video.

Americans have long been fascinated with UFO sightings

Americans first reported UFO sightings in the summer of 1947, and "the rest of the world was paying attention," Eghigian said. Since then, interest in mysterious UFOs, which many believe to be signs of alien life on other planets, has spiked and waned.

In the 1980s and into the 1990s, there was a "renaissance" in American UFO interest, Eghigian said. These spikes may be caused by several purported sightings in one time period, but they can also be caused by increased media attention on individual UFO sightings.

Pop cultural events, including movies like "Alien" and "ET," and the series "The X-Files," also contributed to increased attention on UFOs, according to Eghigian.

In terms of people believing in aliens actually existing, "That doesn't seem to have changed very much over time," Eghigian told Insider.

Now, aliens are a huge part of meme culture

Not all TikTokers posting about UFOs genuinely believe that what they're seeing in the sky is a flying saucer. Sometimes, people appear to just be joking.

Last summer, a viral Facebook event encouraged people to "storm Area 51," the Air Force base in Nevada that conspiracy theorists have alleged has proof of alien life since the 1980s. As millions clicked "attend" on the Facebook event, started by a college student from California, Area 51 quickly became the biggest meme of the summer.

In September 2019, an estimated 3,000 people did decide to "storm" the town surrounding Area 51 — Rachel, Nevada — which became a music festival called Alienstock. The alien-themed music festival was largely peaceful.

While the event's creator, Matty Roberts, had only planned it as a joke, it did end up attracting conspiracy theorists who believe in UFOs and want to expose Area 51 for alleged research involving aliens. As Allegra Frank wrote for Vox at the time, "Storm Area 51 was an obvious joke — one that tapped into the internet's love for memes and easily repeatable humor and coalesced into something much bigger."

Shawn Mendes Reacts to ‘In Wonder’ Trailer, Says He Loves This Shot
We and our partners use cookies on this site to improve our service, perform analytics, personalize advertising, measure advertising performance, and remember website preferences.Ok