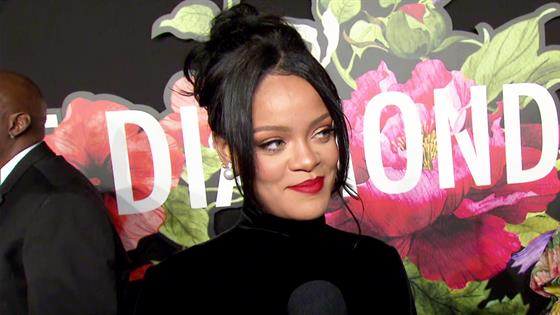 Rumor has it Rihanna is set to release new music in December.

So what can fans expect? Well, according to reports, the project is a dancehall inspired album. But, so far, that and the December release date is all that is known.

However, Ri-Ri tells E! News at the 2019 Diamond Ball that she does hope to work with a long list of artistic women in the near future. “There are a lot of people that want to collaborate with me but there are also a lot of people I want to collaborate with myself. My waitlist is probably really long as well,” she shares. Lizzo is at the top of my list, Gwen Stefani, I love Cardi B and, of course, a ton of guys.”

But those men remain unnamed for a simple reason: they aren’t a priority for her. The Fenty designer explains, “Those are the girls, because I don’t collaborate with girls very often so I think at the top of my list right now are women.”

Meanwhile, the Internet continues to hound Rihanna for new music. They even managed to turn a pregnancy rumor into a demand for an album. On Friday, a Twitter user shared, “rihanna is pregnant??? the baby’s name is probably album cuz we never gonna see it lmfao.”