John Siracusa may not be a household name, but to Apple nerds and podcast fans he is an accidental superstar. Siracusa was first noticed for his ridiculously thorough reviews of Apple's macOS; reviews so long they were sold as Kindle books. From there he moved to podcasting, with this first show, Hypercritical.

While the barrier to entry in podcasting is low, maintaining one is not, especially with the level of research and planning Siracusa was devoting to each episode of Hypercritical, and Siracusa found it harder to fit the show around his work and family commitments. 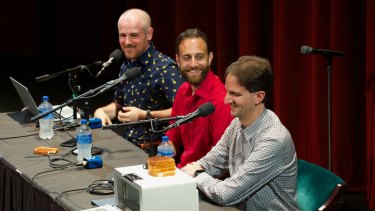 "I was doing that at the same time that I was having my young children and buying a house," explains Siracusa. "And I basically burned out, that was too much. I mean, even though it's just one weekly podcast, just doing all the heavy lifting myself, it was just a little bit too much. So I ended that podcast after 100 episodes, because I felt like I this isn't sustainable."

After some time away from the microphone, Siracusa joined friends Marco Arment and Casey Liss for a short-lived car focus podcast, which of course, with three nerds at the helm, morphed into a technology show, Accidental Tech Podcast.

"It's strange, it's like the only place on the planet that I'm likely to get recognised as anyone other than just a regular person. WWDC basically concentrates only the most enthusiastic fans of our type of podcasts [into] a single place in the world. So if you're there, you are super into the things that we talked about on the show. And if you're super into the things we talked about on the show, chances are good that you already listened to the show."

Nerds are usually the best fans … They're very polite and we always have something to talk about.

While Siracusa is clearly uneasy with being a celebrity, however minor, he's generous when speaking of the fans that approach him.

"Nerds are usually the best fans… They're very polite and we always have something to talk about… And it's a relief because normally you have to do like other small talk, talk about the weather, the local sports team, interests that are more common. But at WWDC, we all know and love the same thing. So it's very natural … it's surprisingly not awkward when people come up and say hi.

"I'm not particularly a fan of doing live shows," admits Siracusa, "but it's a thing that people obviously want to see. So I do them kind of as a courtesy to the other hosts. I feel like the whole reason you want to be a podcaster, is so you can … sit in your pyjamas in front of your computer, in the comfort of your own home and just talk to a microphone. But once a year we do the other thing where we are in front of the audience with microphones talking."