With so many entertainment options, it's easy to miss brilliant TV shows, movies and documentaries. Here are the ones to hit play on, or skip.

A lot of British fantasy and sci-fi has a tendency to revel in Britain's quaint, old-fashioned Britishness. As well as poking gentle fun at enduring British foibles and archetypes, it provides a certain solace through them.

No matter what kind of monster or alien or biblical cataclysm threatens us with total annihilation, there will always be an England where people apologise to you when you stand on their foot on the Tube, one where everyone spends their evenings in a comfy chair in a tidy terrace house dunking biscuits into a nice cup of tea.

There was never much danger that Good Omens, based on the book by Terry Pratchett and Neil Gaiman, would underdo that sort of thing, and tolerance for it will vary from viewer to viewer. 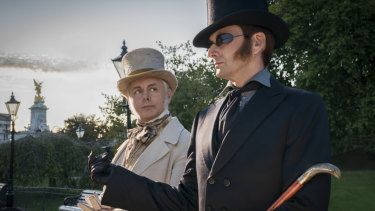 Michael Sheen and David Tennant star in the six-part adaptation of Good Omens, the 1990 novel by Terry Pratchett and Neil Gaiman.

The series' visually hectic first episode introduces us to angel Aziraphale (Michael Sheen) and demon Crowley (David Tennant), who form an unlikely partnership in an attempt to postpone Armageddon – not least because the ensuing eternity of singing heavenly harmonies and watching reruns of The Sound of Music would be so bally well boring.

Sheen makes Aziraphale a wonderfully English angel in that oh-I'm-ever-so-sorry sort of way. Tennant, though, is oddly unconvincing playing Crowley as a louche rock star type who enjoys vintage cars and Bohemian Rhapsody. The tight pants just don't seem to fit him in the way they'd fit an actor who has a bit of the real-life rogue about them.

In any case, it's all still highly imaginative and will all no doubt be catnip for fans of the book, who will get to see an impressive cast bring a multitude of much-loved characters to life.

Jon Hamm is particularly good as Gabriel, a somewhat self-regarding angel with an American accent who never did get to grips with human culture and behaviour. Jolly good biscuit-dunking fun. 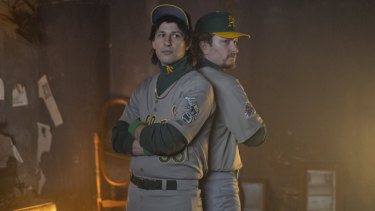 Andy Samberg generates such enormous goodwill that it's almost impossible not to watch whatever silly thing he's just made. This time around it's a 30-minute special in which he and fellow Saturday Night Live alumnus Akiva Schaffer play disgraced baseball stars and steroid cheats Jose Canseco and Mark McGwire in music videos from a rap album they supposedly recorded in the '80s.

It's musically and visually impressive, and features nice little roles for Jenny Slate, Maya Rudolph and the vocal talents of Sia.

Twenty years ago Louis Theroux spent several weeks with British entertainer Jimmy Savile, making a program he hoped would shed light on the veracity of rumours that Savile was a sexual predator. It revealed very little. 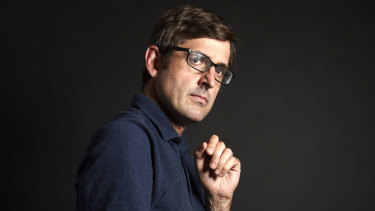 Louis Theroux, pictured, takes a closer look at the Jimmy Savile story, some years after his death. Credit:Richard Ansett/BBC

This follow-up, which Theroux made several years after Savile's death, reveals much more – and the unflinching accounts of women Savile had abused as girls are horrific.

Poignant, too, in a different way, is the pain of other, unsuspecting women whose lives had revolved around Savile for decades. 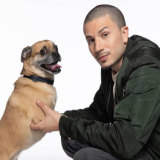 A strange little series about an inordinately dog-proud Brooklynite named Malcolm (series creator Solvan Naim), who seems to spend half his day cooking meals for his dog and the other half getting into dog-related aggro with locals and interlopers in his neighbourhood.

These include a woman who pets his pug-beagle mix, Bruno, without permission; a crack-smoking homeless man who almost hits Bruno with his shopping trolley; and a hipster who lets his greyhound poo on the footpath. Lots of swearing disqualifies it as family viewing. 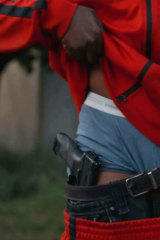 Spanish journalists Sonia López and Noemí Redondo shine a light on some truly horrifying situations in Europe and the Americas. Credit:Alamy

At the Gates of Hell
Docplay

We're so used to seeing English-speaking journalists reporting on atrocities and injustices in far-flung parts of the world that it can be a shock to see, say, Spanish journalists coming into the Anglosphere to report on shameful situations that we don't always think of in the same way.

This eye-opening eight part series has courageous Spanish journalists Sonia López and Noemí Redondo travelling through the Americas and Europe, shining a light on some truly horrifying situations.

Their first stop is Detroit – once one of the richest cities in the world, now the grim epitome of American Rust Belt decay and social injustice. López and Redondo trace the story from the race riots of 1967 through the decline of the car industry to today's appalling water crisis – which overwhelmingly affects African-Americans.

The most recent figures suggest that 150,000 Detroiters have no running water at home, and with half of the city's adults being functionally illiterate they can't understand their punitive water-company repayment plans.

López and Redondo move on to look at Mexico's femicide epidemic, the lost children of Colombia, and violence against LGBT people in Russia.

Locked Up Abroad is what Americans call the white-knuckle television series we know as Banged Up Abroad.

The three seasons available here include the harrowing episode in which Canadian journalist Scott Taylor recalls how in 2004 he and Turkish colleague Zeynep Tuğrul travelled to Tal Afar in northern Iraq to cover the US Army assault on the city. Instead, they were captured by insurgents who began torturing them and threatening to behead them.

Then, of course, the American assault began. As compelling as TV gets.

*Stan is owned by Nine, the publisher of this website.