Last week, BBC Breakfast hosts Naga Munchetty and Charlie Stayt angered viewers and hit headlines for openly mocking the Union Jack flag hanging behind Housing Secretary Robert Jenrick during their interview. As a result, the BBC has come out to insist the moment was meant in a “light-hearted” manner while Naga had to apologise for “liking” tweets about the comments the two made on air.

However, it appears many BBC viewers still aren’t best pleased and admitted they turned off Thursday’s show after Naga and Charlie returned in place of Dan Walker and Sally Nugent.

Replying to the Breakfast official Twitter account, one fan said: “Just saw today is hosted by Naga. So it’s a no, thanks.”

“Will never watch this programme whilst Naga Munchetty is presenting,” a second echoed.

A third harshly said: “Big switch off this morning. @BBCBreakfast have rolled out @TVNaga01 & #CharlieStayt.” 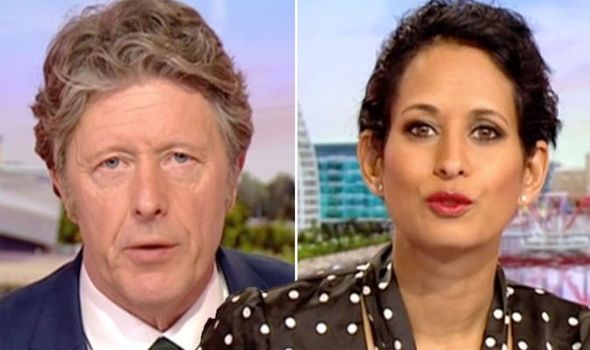 The criticism kept on coming, as a fourth weighed in: “I’m wondering why these two are back on TV.

“They were awful on Saturday kitchen live recently as well. BBC have no b*****s both Charlie and Naga should be taken off our screens.”

While a fifth pointed out: “We see you @BBCBreakfast. We get no 7:32am Government Minister on Naga and Charlie’s day because your employees found the National flag and Monarch hilarious and belittled it. Sorry would be OK.”

And a sixth concurred: “@BBCBreakfast oh well , time to turn off @BBCBreakfast, you’ve not listened to the public, we don’t want these presenters on the TV. Hello @GMB ….”