Against The Rules is the first podcast from Michael Lewis, author of Moneyball and The Big Short. The show has been recommended to me countless times since its launch in April, but I’ve avoided it because of its hideous album art. Well, you shouldn’t judge a podcast by its cover. Against The Rules is a clever look at fairness in 2019, starting with the black-and-white example of a sports referee, before moving onto the stock market, the courts and the media. 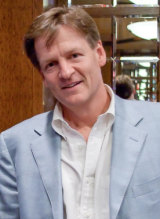 Lewis’ allegories are reminiscent of Malcolm Gladwell’s – simple, everyday occurrences are magnified to supposedly reveal a greater truth about modern society. At times Lewis’ examples are so brilliantly observed, you feel like he’s given you a brief glimpse behind the Matrix. Other times they feel as clunky as “avocado toast is the reason millennials can’t afford houses". Regardless, this short-run podcast is always entertaining, and the clear point of view and razor-sharp wit of the host makes it a rewarding listen.

Five years in the making, the first podcast from “open-source reporting” website Bellingcat is an in-depth investigation into the downing of Flight MH17 over eastern Ukraine. The series is meticulously researched and expertly produced, making it a difficult listen at times. While Bellingcat founder and host Eliot Higgins is never sensational in his reporting, he is often thorough, describing the last moments of flight MH17 and the carnage of the crash site in graphic detail. Yet Higgins is far more interested in the cover-up that follows the crash than the crash itself. In many ways, this feels similar in tone to the recent HBO miniseries, Chernobyl; the podcast never shies away from gruesome details, but it is all in service “of finding the truth amongst the pack of lies” presented by the Russian government.

Following a familiar formula of stand-up comedy podcasts, The Guilty Feminist sees Deborah Frances-White host a weekly panel of like-minded comedians. Each episode begins with a round of “I’m a feminist but…”, as the women describe moments in their life that may not live up to their feminist ideals. The show is laugh-out-loud funny upfront, before moving onto a serious but still very amusing discussion of the theme. The Guilty Feminist doesn’t necessarily follow current events; although current events informs the discussions, each episode is focused on a theme, from 'Jealousy' to 'Safety at Night' to 'The Bechdel Test'. This gives the episodes a timeless quality, so if you like what you hear, you’ll have a deep archive of episodes to explore and binge. Highly recommended.