Bradley Walsh, 60, was on hand to help Anne, 66, Olympian Colin Jackson, 53, comedian Josie Long, 38, and broadcaster Nicky Campbell, 59, as they participated in a festive edition of The Chase. Before they could get their hands on some money for their chosen charities, they each took on one of five quizmasters waiting in the wings. However, it was during her face-to-face with Paul, 50, the former BBC journalist “broke the rules” of the ITV game show as she locked down her answer before the host had finished asking a particular question.

The moment came after Anne had managed to accumulate £4,000 during her solo cash-builder round after Colin had already kickstarted the jackpot with a sum of £3,000.

Finally facing Paul, the journalist was asked: “‘Though we adore men individually, we agree that as a group they’re rather stupid’ is a line in what Mary Poppins song?”

Three answers available for the contestant and Chaser to choose from included Jolly Holiday, Sister Suffragette and Chim Chim Cher-ee.

Before the host could complete his role in asking the question and giving the selection of answers, the player locked down option B.

Stopping the game in motion, the presenter told the broadcaster: “Don’t go cheating now!” as she was supposed to wait until he had finished speaking to make her guess. 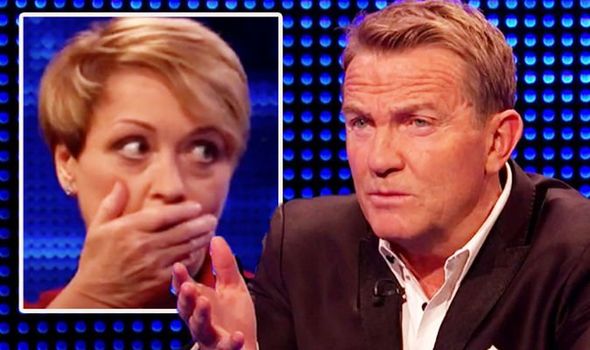 We will use your email address only for sending you newsletters. Please see our Privacy Notice for details of your data protection rights. Mark Labbett erupts at The Chase contestant as they forget rule

“Don’t go pressing the button and putting [Paul] under pressure,” he continued as Anne put her hand to her mouth in shock.

The host then continued with the game as he revealed the player was right by selecting the answer, Sister Suffragette.

Paul also locked down the same answer but his efforts weren’t enough to stop the journalist as she made it back for the Final Chase.